VICTORIA — British Columbia's premier says legislation proposed in the United States that would scrap a long-standing requirement for American cruise ships to dock at a foreign port between domestic stops doesn't change the fact people want to visit
Jun 11, 2021 5:26 PM By: Canadian Press 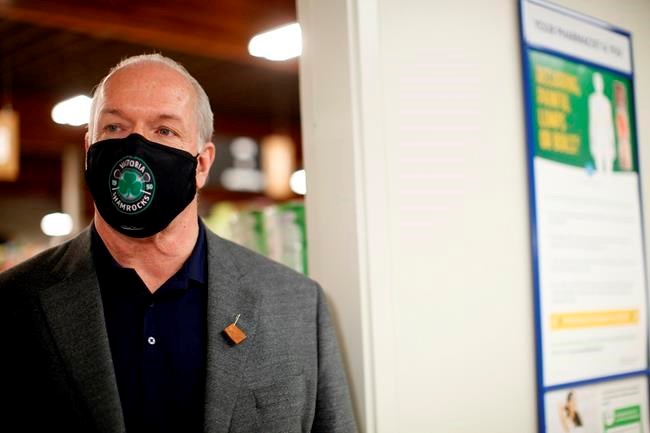 VICTORIA — British Columbia's premier says legislation proposed in the United States that would scrap a long-standing requirement for American cruise ships to dock at a foreign port between domestic stops doesn't change the fact people want to visit B.C.

The "machinations of U.S. politics" on a given day don't change the draw for people to travel up B.C.'s coast, said Premier John Horgan, adding he doesn't believe there's anything the B.C. government can do about decisions made in the U.S. Senate.

Horgan told a news conference on Friday that he's passionate about making sure B.C. can welcome visitors once pandemic-related travel restrictions are lifted, but he doesn't "regret not yelling louder at people who would not have been listening."

Utah Sen. Mike Lee has introduced three bills to repeal and reform the 135-year-old Passenger Vessel Services Act, saying in a statement this week that it's an "outdated, protectionist law" that benefits Canada and harms American jobs.

International cruise ships are banned in Canadian waters until the end of February due to the pandemic and the U.S. House of Representatives passed legislation last month that allows the ships to bypass B.C. ports until that restriction is lifted.

Horgan said he spoke on Thursday with Alaska Sen. Lisa Murkowski, who was behind the legislation, and she assured him the law only applied until Canada lifts its restrictions, while Lee's proposed changes would not be temporary.

"We're in a global pandemic. The United States, on a good day, is difficult to a govern," Horgan said Friday. "To suggest that somehow I could have thrown myself in front of this bus and stopped it is the height of hubris in my mind."

Until the pandemic hit, about 1.7 million cruise passengers visit Vancouver and Victoria every year, he said.

"Absolutely, that's the case with many other tours and many other parts of the tourism economy, but cruise is very, very different," he said in an interview.

Some passengers sailing from Seattle to Alaska don't even know they're set to stop in Victoria until they get their itineraries, he added.

Robertson said Canadian and B.C. officials can do more to address what he called an urgent situation facing an industry that contributes significantly to the economy.

"I know that talking to cruise line officials, you know, they feel that perhaps their business is not wanted in Canada," he said. "With the industry bringing $2.7 billion to British Columbia, you can't take that lightly."

Robertson said he's written a letter to Prime Minister Justin Trudeau calling on Ottawa to rescind the ban on cruise ships this fall and announce the change immediately to send a positive signal to the industry that they will be welcome.

He'd like Horgan to publicly support that call for reopening Canadian waters and wants to see the provincial government work closely with the cruise ship industry on efforts to build back Canada's reputation as a cruise destination, Robertson said.

Asked about Lee's proposal, Transport Canada said in a statement the government understands that the cruise ship industry has been hard hit by the economic impact of the COVID-19 pandemic and it has been working with public health officials, provinces and territories, industry and other stakeholders to reassess measures.

— by Brenna Owen in Vancouver

This report by The Canadian Press was first published June 11, 2021.

This story was produced with the financial assistance of the Facebook and Canadian Press News Fellowship.