Father of the Great One dies and 'The Hardy Boys' series: In The News for March 5

In The News is a roundup of stories from The Canadian Press designed to kickstart your day. Here is what's on the radar of our editors for the morning of March 5 ... What we are watching in Canada ...
Mar 5, 2021 1:15 AM By: Canadian Press 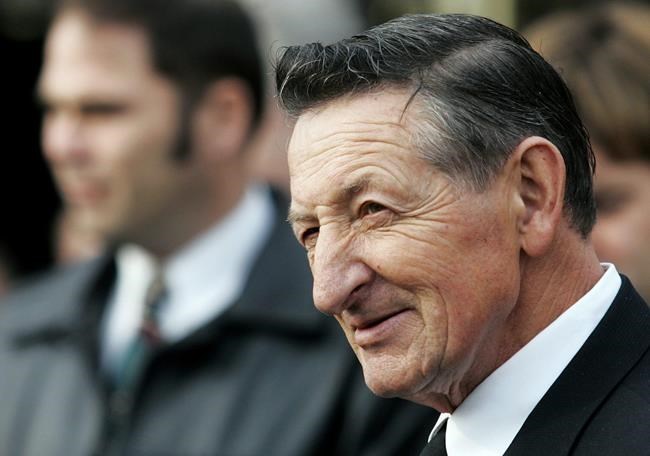 In The News is a roundup of stories from The Canadian Press designed to kickstart your day. Here is what's on the radar of our editors for the morning of March 5 ...

What we are watching in Canada ...

Walter Gretzky, the ultimate Canadian hockey dad who taught and nurtured the Great One, has died. He was 82.

The father of Wayne Gretzky became a name himself, a constant in Wayne's world. As Wayne's star ascended, Walter remained a blue-collar symbol of a devoted hockey parent in a country filled with them.

"It's with deep sadness that Janet and I share the news of the passing of my dad," said Wayne. "He bravely battled Parkinson's and other health issues these last few years, but he never let it get him down.

The two were also often intertwined, their father-son story used in commercials from Tim Hortons to Coca-Cola. And following in the footsteps of Alexander Graham Bell, they made Brantford, Ont., famous.

Walter was celebrated for far more than just fathering a superstar, however. His down-to-earth, no-airs approach to life and devotion to his family struck a chord with Canadians.

"Sometimes, I swear to you, I have to pinch myself to make sure I'm not dreaming," Walter wrote in his 2001 autobiography "Walter Gretzky. On Family, Hockey and Healing."

Walter's celebrity status increased after making a remarkable recovery from a stroke suffered in 1991. His autobiography and a 2005 made-for-TV movie told the story.

The government extended those orders for Toronto, Peel Region and North Bay two weeks ago due to high virus case numbers.

Restrictions loosened in the rest of the province last month as regions moved back to the government's colour-coded pandemic response framework.

Top doctors in Toronto and Peel have recommended that the highest level of public health restrictions take effect in their regions on Monday.

They are asking for the "lockdown" zone of the framework that allows more businesses to open with restrictions.

The province's chief medical officer says he's concerned about test positivity rates and more infectious variants in those regions, and that the reopening must be cautious.

WASHINGTON -- Worried about continuing threats, the acting chief of the U.S. Capitol Police has appealed to congressional leaders to use their influence to keep National Guard troops at the Capitol, two months after the law enforcement breakdowns of the deadly Jan. 6 insurrection.

Yogananda Pittman told the leaders Thursday in a letter obtained by The Associated Press that the board that oversees her department has so far declined to extend an emergency declaration required by the Pentagon to keep Guardsmen who have assisted Capitol officers since the riot.

Pittman said she needed the leaders' assistance with the three-member Capitol Police Board, which reports to them. She said the board has sent her a list of actions it wants her to implement, though she said it was unclear whether the points were orders or just recommendations.

The letter underscored the confusion over how best to secure the Capitol after a dismal lack of protection in January and biting criticism for law enforcement's handling of the invasion.

And it came as authorities spent the day on high alert, primed for a “possible plot” by a militia group to storm the building again, two months after Trump supporters smashed through windows and doors in an insurrection meant to halt the certification of Joe Biden’s presidential victory.

The list in the letter to lawmakers included a partial removal of the imposing fence encircling the Capitol grounds starting Monday and a drawdown of the Guard to 900 troops from the current 5,200 remaining in Washington.

Police want to keep the fence indefinitely. In her letter, Pittman said she would ask for a drawdown of the deployment “based on the threat environment and physical and operational security capabilities.”

Earlier Thursday, The Associated Press reported the Pentagon was reviewing a Capitol Police request to keep up to 2,200 Guardsmen at the Capitol another 60 days. A statement from the police said Pittman had formally made the recommendation to the Pentagon.

What we are watching in the rest of the world ...

Footage of a brutal crackdown on protests against a coup in Myanmar unleashed outrage and calls for a stronger international response Thursday, a day after 38 people were killed. Videos showed security forces shooting a person at point-blank range and chasing down and savagely beating demonstrators.

Despite the shocking violence the day before, protesters returned to the streets Thursday to denounce the military's Feb. 1 takeover — and were met again with tear gas.

The international response to the coup has so far been fitful, but a flood of videos shared online showing security forces brutally targeting protesters and other civilians led to calls for more action.

The United States called the images appalling, the UN human rights chief said it was time to "end the military’s stranglehold over democracy in Myanmar,” and the world body's independent expert on human rights in the country urged the Security Council to watch the videos before meeting Friday to discuss the crisis.

YouTube has removed five channels run by Myanmar's military for violating its community guidelines and terms of service.

“We have terminated a number of channels and removed several videos from YouTube in accordance with our community guidelines and applicable laws,” YouTube said in an emailed statement.

YouTube said it had terminated around 20 channels and removed over 160 videos in the past couple months for violating its policies regarding hate speech and harassment, spam and deceptive practices, violent or graphic content policy and violations of its terms of service.

"Every time I was at a cabin with no internet or something like that, they were the books I would read before bed," he says.

"So I felt really close to them, and it was just absurd to be able to make my vision of Frank come to life."

Premiering Friday on YTV in Canada after its U.S. debut on Hulu in December, the mystery drama is based on the time-honoured stories written under the pseudonym by Franklin W. Dixon by numerous authors, including Ontario-raised Leslie McFarlane.

The Canadian cast, crew and creators filmed in and around Toronto, Hamilton and Cambridge, Ont. Filming wrapped just a couple of weeks before the COVID-19 pandemic shutdowns hit.

In this version of the story, 16-year-old Frank and 12-year-old Joe grapple with a family tragedy and investigate strange events in the small town of Bridgeport in the 1980s.

A Toronto judge refused to name a man who killed 10 people and injured 16 others as she read his guilty verdict this week, saying she would not help him achieve the notoriety that had motivated his deadly rampage.

Justice Anne Molloy instead referred to Alek Minassian only as John Doe, lending another voice to a growing chorus urging police, media and the public at large to refrain from naming fame-seeking mass murderers.

"This accused committed a horrific crime, one of the most devastating tragedies this city has ever endured, for the purpose of achieving fame," Molloy said in her decision. "And he has achieved that purpose. He has told forensic psychiatrists who assessed him that the attention he has received and the information available when you Google his name, makes him 'happy.'"

The movement to not name people accused of serious crimes has gained steam in the three years since Minassian carried out his van attack.

Last year, Prime Minister Justin Trudeau urged the media to avoid mentioning the name of the man who carried out a mass killing in Nova Scotia.

That call echoed a vow from New Zealand's Prime Minister Jacinda Ardern in March 2019, that she would never say the name of a man who opened fire on a Christchurch mosque, killing 50 people.

Molloy's move pleased those most affected by Minassian's actions, including the family members of some of his victims.

"I haven't used the name of the perpetrator since it happened for that reason," says Nick D'Amico, whose sister Anne Marie D'Amico was killed in the attack. "We can get fame in positive ways. We don't have to go down that road."

This report by The Canadian Press was first published March 5, 2021

Judicial recount in Yukon election to occur in Whitehorse today over tie riding
Apr 19, 2021 1:00 AM
Comments