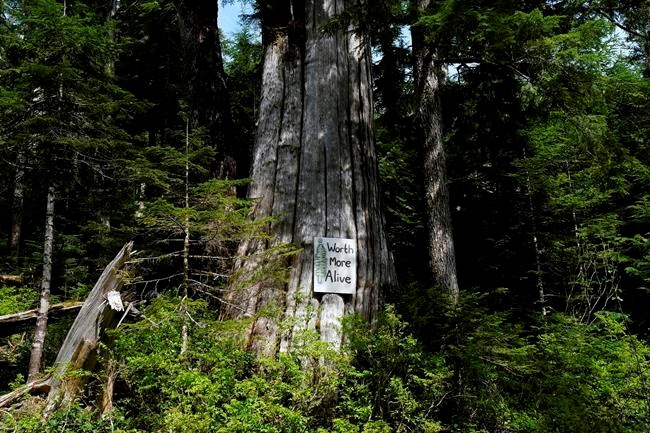 PORT RENFREW, B.C. — The leaders of three First Nations on southwestern Vancouver Island say they've told the B.C. government they want old-growth logging temporarily deferred in two areas, including the site at the centre of ongoing protests and arrests.

The Huu-ay-aht, Ditidaht and Pacheedaht hereditary and elected chiefs say they've signed a declaration to take back power over their traditional territories after more than 150 years of decision-making by others about their land, water and people.

The three nations gave the province notice on Saturday of their intention to defer old-growth logging for two years in the Fairy Creek and central Walbran areas near Port Renfrew while they prepare stewardship plans, the chiefs said in a statement.

Activists opposed to old-growth logging have been camped out at the Fairy Creek watershed since August and the RCMP began enforcing a court injunction last month in order to allow workers with the Teal-Jones Group to resume activities.

Teal-Jones will abide by the nations' declaration and looks forward to engaging as they develop their forest management plans, the company said in a statement.

The B.C. government honours the nations' declaration and it's pleased to enter into discussions about the logging deferral request, Premier John Horgan said.

"We understand the request must be addressed expeditiously, and we will ensure a prompt response," Horgan said in a statement on Monday.

More than 160 people have so far been arrested for breaching the civil court injunction at two protest sites on southern Vancouver Island, including Ferry Creek, where Teal-Jones had said it planned to harvest about 20 hectares.

The protest group dubbed the Rainforest Flying Squad said it welcomes the First Nations' call for deferrals as a step in the right direction, but old-growth trees outside the Fairy Creek and central Walbran areas remain at risk of logging.

The blockaders said they would stand their ground until the B.C. government implements further logging deferrals for old-growth forests at risk and offers financial support for First Nations that rely on revenue from the forest industry.

The chiefs' statement said third parties have no right to speak on the nations' behalf and permitted forestry operations in parts of their territories outside the Fairy Creek and central Walbran areas should be allowed to continue without disruption.

"For more than 150 years (the nations) have watched as others decided what was best for their lands, water, and people. This declaration brings this practice to an immediate end," said the statement from the three nations released Monday.

The B.C. government has pledged to implement the recommendations from an independent review of old-growth forest management released last year, including the deferral of logging in ecosystems at risk of irreversible biodiversity loss.

This report by The Canadian Press was first published June 7, 2021.

Hearing resumes into death of man who suffocated in spit hood in Halifax police cell
Jun 21, 2021 7:47 AM
Comments