After a flight home from Europe, and a mandated stay in an approved quarantine hotel in Montreal, Charles Philibert-Thiboutot is finishing his required 14 days of isolation in Edmonton.
Mar 2, 2021 8:56 AM By: Canadian Press 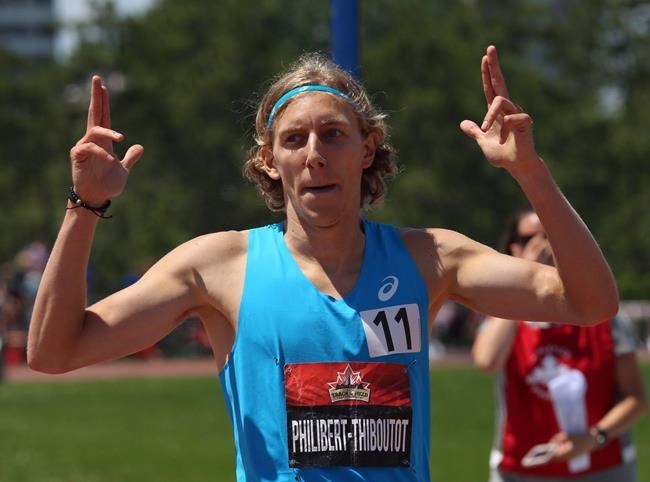 After a flight home from Europe, and a mandated stay in an approved quarantine hotel in Montreal, Charles Philibert-Thiboutot is finishing his required 14 days of isolation in Edmonton.

It wasn't how the middle-distance runner planned to be spending this time — the federal government tightened travel restrictions around COVID-19 just after he left for Europe. But it's a small price to pay to chase his Olympic goals.

The 30-year-old from Quebec City said thankfully the timing works. He usually takes a few days off in March between the indoor and outdoor seasons.

"So it's doable," said Philibert-Thiboutot, who was billed $1,100 for three hotel nights, but passed his COVID-19 test in 12 hours.

"But I would say it's probably the last time that 14 days (off) is going to be possible."

LIke so many Canadian athletes, Philibert-Thiboutot is chasing Olympic qualifying standards while trying to navigate all the pandemic restrictions.

Because Philibert-Thiboutot, a semifinalist in the 1,500 metres at the Rio Olympics, was sidelined with an injury for 2019 and the 2020 season was wiped out by the pandemic, he hasn't run the qualifying standard for Tokyo (three minutes 35 seconds). His best time is 3:34.23, set in 2015. Before his recent races in Europe, he had no world ranking, which is another qualifying route.

He lived and trained at INSEP — the National Institute of Sport, Expertise and Performance on the outskirts of Paris — and his month of racing was the closest thing to a season he's been able to string together since 2018.

"I'm starting from scratch," he said.

Philibert-Thiboutot ran a Quebec record in the 3,000 metres in his first race in Europe, a World Athletics Indoor Tour meet in Karlsruhe, Germany. He recorded an indoor personal best of 3:40.21 in the 1,500 metres in Dortmund, Germany. In his last race on Friday in Toulon, France, he went well for 3,500 of the 5,000-metre race, but ran out of gas.

"The results I had in Europe were a bit sub-par, I had better expectations to be honest, but it definitely got the ball rolling," he said. "Getting back into (racing) was definitely a milestone, something I needed to be able to accomplish, I think, before I could carry on with the rest of the season. So there's some positives, there's some negatives. But all in all, I think I'm off to a good start."

The next step is more travel. In September, he and his wife Beatrice packed up the car and drove to Edmonton where she's doing a fellowship in medicine. The winter weather is too cold for decent outdoor training, and the indoor track is closed due to COVID-19 restrictions.

"It's all shut down. They won't even let (national team) athletes train, which I think for that reason, makes it the worst province to be in during the pandemic, to be honest," he said.

Philibert-Thiboutot has been travelling to Vancouver to train, and will resume doing that. He'll likely head back to Europe in May, and because of the 14-day quarantine requirement, probably won't come back home until after the Olympics.

"I cannot afford on a fitness and training level to come back and sit down for 14 days right in the middle of the season," he said. "It's a big sacrifice to make this year, obviously the pandemic's done that."

It will mean a few months away from his wife.

"I don't like to think about it in advance because it's going to be rough for sure, thinking about it kind of makes me sad," Philibert-Thiboutot said. "But that's the sacrifice I'll probably have to make to go to the Olympics this year."

Countless athletes are in the same boat, facing a time crunch to qualify for Tokyo, and are limited both by Canada's border restrictions, and facility access by various lockdowns.

Caroline Ehrhardt and husband Taylor relocated this week to California for the next few months for the competitive opportunities and warm-weather training — she announced the news on Instagram. She's a triple jumper and he's a decathlete. They'd been part of a group of athletes training in a hockey arena in London, Ont.

"Leaving the country for the foreseeable future in the middle of a pandemic feels reckless," Ehrhardt posted. "A lot of stress and fear went into this decision. But the only thing scarier to me than this leap of faith is the thought of me never getting the chance to see what I'm truly capable of."

Athletics Canada isn't making attendance at the national championships mandatory to crack the Olympic team this year, to ease the travel burden on athletes training abroad.

This report by The Canadian Press was first published March 2, 2021.