Rookie tight end Burt, Hamilton Tiger-Cats learning about each other at training camp

Training camp is a time for learning for both the Hamilton Tiger-Cats and rookie Jake Burt. Hamilton selected the former Boston College tight end first overall in this year's CFL draft intrigued by the possibilities his athleticism could bring.
Jul 22, 2021 10:44 AM By: Canadian Press 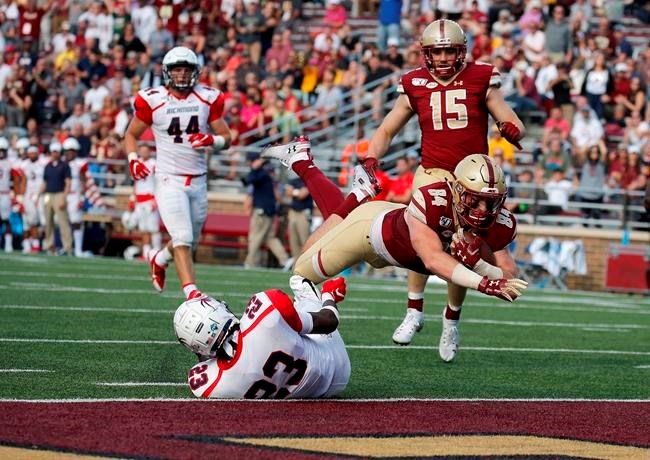 Training camp is a time for learning for both the Hamilton Tiger-Cats and rookie Jake Burt.

Hamilton selected the former Boston College tight end first overall in this year's CFL draft intrigued by the possibilities his athleticism could bring. Head coach Orlondo Steinauer said the team is seeing first-hand what the six-foot-three, 230-pound Burt is capable of.

"Yes, he's a very athletic guy," Steinauer said. "If you want to label him a Swiss Army knife, I wouldn't say that's not correct.

"Not that we'll use all of them right away but we definitely are aware. He's showing daily that he's capable of more than just a 1-2 thing."

Burt became the first tight end selected first overall since 1989 but he can expect to be utilized many different ways by Tommy Condell, Hamilton's imaginative offensive coordinator.

There will be times when Burt lines up as a traditional tight end or takes a step back as an H-back. But he could also see time at slotback or receiver to create mismatches with opposing defences.

"I can already see the great things we're going to be able to do as an offence collectively with (Condell) at the helm," Burt said. "I'm only excited to see what else he's got from what I've seen so far."

Moving players around is nothing new for Condell. He’s had all-star receivers Brandon Banks and Bralon Addison line up wide, in the slot and even in the backfield sometimes.

Addison, who played quarterback in high school, has also taken snaps in Hamilton’s wildcat formation. And in 2019 when the Ticats’ offence scored a CFL-high 551 points, running back Sean Thomas-Erlington often lined up at receiver.

"Jake comes to work and whatever you give him he's willing to do," Steinauer said. "That's what we saw, that's what we heard in the interviews and our background checks.

"Nothing has changed except that you get to see it live. He's a great young man. His best football is going to be ahead of him."

Burt had 23 catches for 307 yards and two touchdowns over 36 games at Boston College. Last year, he signed as an undrafted free agent with the New England Patriots and spent the entire season on the NFL team’s practice roster before becoming a free agent.

Burt grew up in Boston and was a late entry into the CFL draft. He was born in Regina and lived there for four years before relocating to the U.S. with his family.

So while Burt has some pro football experience, he's now with a new team in a new league learning a completely different system and game.

"The transition has been going pretty smooth so far," he said. "Football is football, that's what I told myself coming up here.

"There are definitely some differences, some things I'm learning and picking up as I rep it all out. I'm actually enjoying some of the changes, some of the nuances that are here in the CFL game and I feel like I'm picking it up pretty well. With every practice I'm going in there trying to get a little bit better every single day."

One big adjustment for many CFL newcomers is the yard off the line of scrimmage. But for Burt, a challenge has been getting used to is the unlimited motion allowed in Canadian football.

"I'm just learning to use it strategically to my advantage," he said. "I'm still getting comfortable in it.

"I'm not an expert yet but I'm going to keep grinding away every single day and keep getting better at it as I go."

The CFL is resuming play this year after cancelling the 2020 season due to the COVID-19 pandemic. The league will open a 14-game schedule Aug. 5 with Hamilton visiting Winnipeg in a '19 Grey Cup rematch.

The Bombers defeated the Ticats 33-12 for their first Grey Cup title since 1990. Hamilton last won a CFL championship in '99 but will host the '21 Grey Cup in December at Tim Hortons Field.

There will be no exhibition games this year but that doesn't really concern Burt.

"Games are games, for sure," he said. "But if you approach practice the right way and treat every practice like it's a game ... you're going to get what you want out of it.

"At the end of the day, it's football. I've been a move tight end before, I've played kind of all over the place so I don't feel out of my comfort zone. I'm just taking this as a learning experience and learning as much as I can from these guys and applying it to what I know and my tricks of the trade and that can only help me get better as a player."

This report by The Canadian Press was first published July 22, 2021.