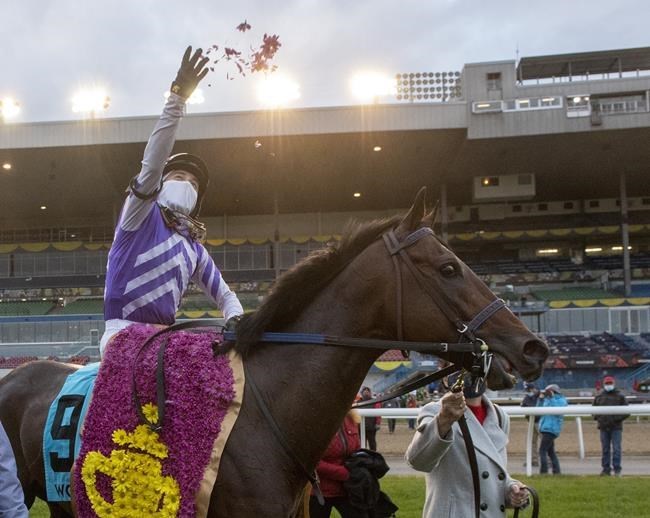 Both Woodbine Racetrack in Toronto and Woodbine Mohawk Park in Campbellville, Ont., will allow spectators at 25 per cent capacity starting Canada Day (July 1). The move comes after the Ontario government announced Thursday it will move into the second stage of its reopening plan next Wednesday.

"It's obviously exciting for all of our fans, owners and wagering customers to be able to get back to the racetrack," Lawson said in a telephone interview. "A big part of horse racing is the live experience of being around the horses and watching the races.

"As great as Woodbine does in terms of simulcasting and broadcasting our product, what people really like and love is being there in person and seeing the air of excitement around the jockeys, the drivers and racing. It's a great experience."

The move to the second stage was to originally take effect July 2 but COVID-19 vaccination targets have already been reached, and other health indicators have improved since strict measures took effect in April to control the third wave of the global pandemic. Under terms of the second stage, outdoor horse racing can be held at 25 per cent capacity.

Lawson said patio dining will also be offered at either Woodbine or Mohawk Park on Thursday but those wishing to attend will first have to  secure reservations. And patrons will also have to adhere to government requirements regarding the wearing of masks prior to entering the facility or leaving a table to use a restroom.

The Canada Day card at Woodbine Racetrack will begin that afternoon while racing at Mohawk Park will start later in the evening.

"We're working out ... logistics now and will aim to communicate them in the next couple of days," Lawson said.

Lawson said it was difficult to pinpoint exactly how many people will be allowed into the two facilities.

"I think in the thousands at both places," he said. "We're assessing exactly the term of 25 per cent of seating capacity . . . given our anticipated crowds, we think we'll be able to accommodate our full crowds."

The move to the second stage is also a very good sign for Ontario's three CFL franchises, with the 14-game schedule slated to start Aug. 5. The league didn't play in 2020 due to the COVID-19 pandemic.

The three Ontario teams will open the '21 season on the road. The Toronto Argonauts will be the first to have a home game — Aug. 21 versus the Winnipeg Blue Bombers.

The Ottawa Redblacks will host the B.C. Lions on Aug. 28. The Hamilton Tiger-Cats will return to Tim Hortons Field to face the archrival Argos on Sept. 6 in the annual Labour Day Classic.

"Kudos to the people of Ontario for doing their part in terms of vaccinations to get us to the percentage that allowed this to happen," said Matt Afinec, Hamilton's president/chief operating officer of business operations. "It's well documented the importance of fans relative to our business model.

"We're a gate-driven league (and) that's a vital component of our business. But fans serve a purpose well beyond driving the business model of our teams, they help fuel the environment, they help support our players."

"It's important to at least have the notion that fans are going to be part of it as something we can work towards," Goudie said. "Things become real now when we know we're going to be hosting people back at TD Place in late August.

"But I think that's just the start. I think we're probably in for two more steps in the government's process between now and our first game. I know there's no Stage 4 in the process but at some point there's going to have to be one added and I think that's the stage we're likely at come opening night."

Goudie added Thursday's announcement shows there's there's a light at the end of the tunnel.

"Big-time and we can feel that within our staff," he said. "The schedule meant we'd have football but football without fans . . . .that's not something we're used to so, again, this makes it all real.

"When we talk about getting back to some sort of normalcy, social animals that we are, being able to celebrate a football game with people is more normal."

Major League Baseball's Toronto Blue Jays and Major League Soccer's Toronto FC are playing out of temporary homes in Buffalo, N.Y., and Orlando, respectively. Due to border restrictions and the large amount of American teams in those two leagues, it's much more difficult for the Blue Jays and TFC to play in Toronto.

The province had originally expected to remain at each step for at least 21 days to evaluate any impacts on key public health and health system indicators. If it sticks to that mandate, a move to stage 3 — and a further loosening of restrictions — would be around July 22.

The $1-million Queen's Plate — the opening jewel of the OLG Canadian Triple Crown and North America's oldest continuously run stakes event — is slated for Aug. 22 at Woodbine Racetrack. Last year's race was held without fans in the stands but Lawson is buoyed by the knowledge that at least some will be allowed back this time around.

"The good news is 25 per cent capacity should be the minimum," Lawson said. "But I think as vaccination rates go up and cases continue to go down, the trend seems to be both of those things are happening, you can expect that 25 per cent will be the minimum."

This report by The Canadian Press was first published June 24, 2021