'It’s like your twin sibling saying you (SWS) and them (SRWS) will host a joint birthday party for both of you to celebrate with friends.'
Mar 4, 2021 6:53 AM By: James Hoffele 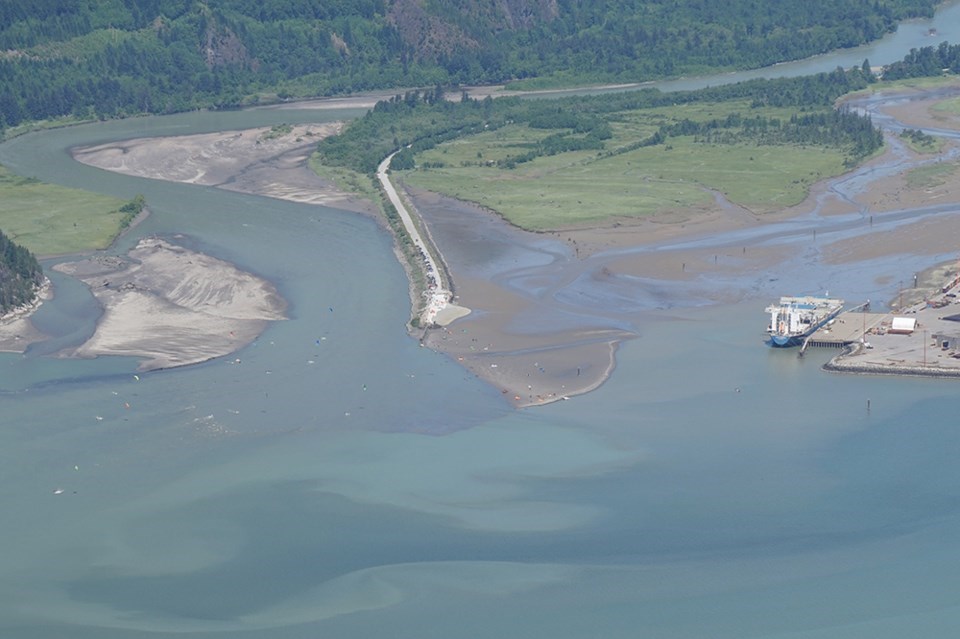 The Squamish Spit.The Chief staff
Anyone who has ever travelled to the Squamish River Estuary knows it is a very special place.

Visitors are treated to views of a landscape of marsh habitat, seagrass, and tidal streams that’s home to a wide range of biodiversity, including providing space for juvenile salmon to feed, grow, and avoid larger predators.

The wind profile at the estuary also makes it a world-class destination for wind sports.

The construction of “the Spit” in the 1970s, for a coal port that was not meant to be, enables kiteboarders and windsurfers to access and harness this sought-after wind and enjoy being propelled across the waters of Howe Sound.

This access is now in jeopardy. The Squamish River Watershed Society (SRWS) is planning to commence removal of the Spit this year without meaningful engagement and without accommodating the interests of the Squamish Windsports Society (SWS) and other recreationalists.

In partnership with Squamish Nation and Fisheries and Oceans Canada (DFO), SRWS plans to remove Spit road in the fall this year, leaving the windsports community with options for future seasons that are either financially infeasible or pose serious safety and environmental risks.

Proceeding with the habitat restoration project in this way is a departure from the terms of the funding agreement between DFO and SRWS to conduct the works.

In the agreement, it’s stated that “adjustments to the Spit will also provide access for the recreational user groups, in particular the Windsports Society.”

Further, the project is not described as a complete removal of the Spit, rather as a realignment of the one kilometres of Spit road to connect to Third Avenue that would deflect sediment from accumulating along the berth at Squamish Terminals as well as road access for wind sport and recreational enthusiasts.

Patricia Heintzman’s comments in The Chief’s article, “What is the future of the Squamish Spit?” last week are contradictory. Her claim that “[the realignment] certainly has never been, from Day 1, in the scope of [this] project” runs counter-factual to the agreement and her statement on the realignment being included in the original proposal. At the same time, “the science” she refers to multiple times supposedly indicates the realignment may not be the solution and may negatively affect silting at the terminal. How can the modeling suggest that realignment is not viable if it is not part of the scope and presumably not modeled? DFO and SRWS are not sharing the results of this modeling with the SWS nor publicly, so verifying these assertions is not possible.

So why the secrecy over the science, haste in removal, and shift in plan? The impetus for this project’s aggressive timeline appears to be typical government bureaucratic thinking. Simply, the funding agreement expires in 2022 and removing the Spit is viewed as easier to achieve than a realignment within the timeline given to spend taxpayer money.

It’s like your twin sibling saying you (SWS) and them (SRWS) will host a joint birthday party for both of you to celebrate with friends.

You plan for this shared party for months and are excited by the prospects of a fun time for everyone. But then two days before the party, your twin says, “actually, it’s only a birthday party for me and your friends are not welcome.”

You’re left with zero prospects for a venue, there’s no cake, and most of your friends send you a “happy bday” text instead.

Though barging materials from the Spit to construct a road or footpath from Third Avenue may cost more, it would preserve a unique outdoor attraction that supports local businesses and tourism while promoting habitat function. With loss of the Spit, much of the injection of money into our community from the spending of about 6,000 kiteboarders and windsurfers in a season plus the internationally-recognized KiteClash event would be lost too. Taking some additional time to agree to a solution with all stakeholders is prudent to ensure the over $1.6 million in funds from the project agreement are used in a way that limits the amount of activity in the estuary while keeping this outdoor recreation resource.

Even without road access to the Spit, many kiteboarders will continue to chase the wind. What will change is that the SWS will likely fold, opening up a free-for-all in the estuary. There almost certainly will be dangerous and potentially deadly encounters without the SWS saving people from drifting into the terminal and being stranded in cold water.

In addition, the SWS forbids users from kiting in the estuary due to its ecological sensitivity. Without the SWS, this restriction would no longer be enforced, resulting in environmental impacts. There will be impacts from a ton of boats ferrying people back and forth to launch their kites off the island too.

Personally, while I am an avid kiteboarder, I’ve been an environmentalist much longer. Recovery of salmon stocks that the struggling southern resident killer whale population depends on for food is an important endeavor that I’m glad the government is supporting.

However, we also need to recognize that the Spit is a relic of hyper-industrialization that has transformed into a novel source of joy for people.

The realignment option to Third Avenue as originally planned seems viable in accommodating both interests, and there may be other creative proposals. Identifying and realizing these win-wins requires a recommitment from SRWS and DFO to a collaborative process that brings all groups to the table in project planning, transparent information sharing, and open-minded decision-making.

That’s the sort of sustainable restoration that should be strived for in Squamish.