If you think what happened the riot at the U.S. Capitol building is something that could never happen here, think again.
Jan 21, 2021 7:48 AM By: Steven Chua 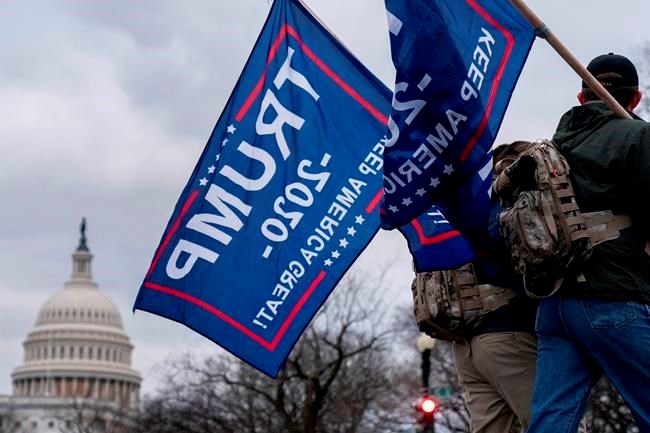 Trump supporters walk past the dome of the Capitol Building in Washington, Wednesday, Jan. 6, 2021. THE CANADIAN PRESS/AP/Andrew Harnik

If you think what happened the riot at the U.S. Capitol building is something that could never happen here, think again.

A recent report from a UK-based think tank has highlighted that right-wing extremism is becoming alarmingly more common, even up here.

“We were really struck by the high level of engagement by Canadians,” said Jacob Davey, the Institute for Strategic Dialogue (ISD) senior research manager and co-author of the report, told VICE News.

“It’s clear that Canada has a well-established system of right-wing extremists very much comparable to that of the U.S. and U.K., and it’s part of a global pattern.”

According to Davey in the VICE story, this activity has increased during COVID and anti-racism protests, with the latter attracting people who feel racism isn’t an issue in Canada.

One doesn’t have to look far in Squamish to see that people are becoming bitterly divided over certain issues. One of the major ones is whether or not COVID-19 vaccines are effective.

You don’t need to look far to find a comment thread filled with people making absolutely false claims about vaccines causing autism, or even the virtues of the widely-discredited hydroxychloroquine ‘cure’ to the pandemic.

While we aren’t in the middle of an election where Donald Trump is straight-up lying about ‘theft’ that never occurred, we are facing a similar problem.

We are in a society where, increasingly, people are detaching themselves from reality.

Previously, it was possible to talk to people and hopefully have an informed, reasoned debate. But nowadays, that’s becoming increasingly rare.

You can’t reason with people who are determined to make up their own set of facts.

Many people have had enough time — especially from a year where staying at home was the primary activity — to become self-radicalized online.

So what’s the solution?

I don’t know. But one thing that we can do is avoid being complacent, recognize the damage that misinformation can do, and do everything you can to combat it.

We should all be finding our own little ways to stifle or stop the flow of misinformation.

Here are some easy examples. Learn and teach others how to properly fact check information. Tell people — respectfully — when they are spreading falsehoods. Support accredited journalistic outlets.

Whatever you do, no matter how big or small, be proactive in contributing to facts that ground us in reality.