OPINION: In praise of negative news

“Why don’t you write good news stories?” and “Why is everything so negative?” are comments we get a lot at the newspaper. We actually do write quite a few positive stories on the regular — just check out the community and sports sections.
Dec 12, 2019 6:00 AM By: Keili Bartlett 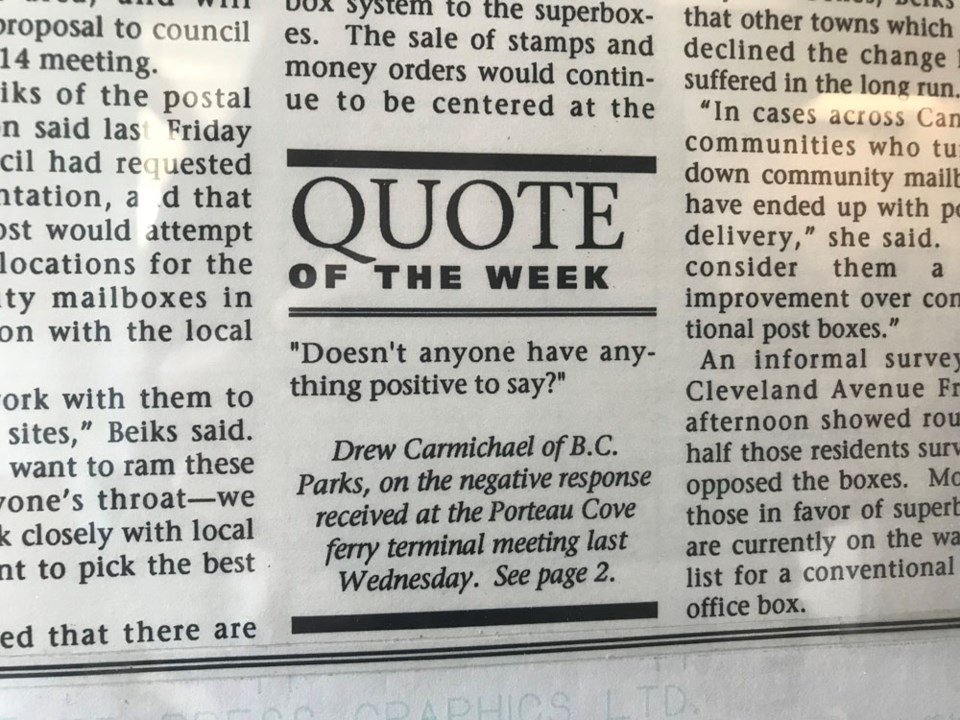 The front page of the first issue of the Squamish Chief newspaper shows a quote asking, "Doesn't anyone have anything positive to say?"

“Why don’t you write good news stories?” and “Why is everything so negative?” are comments we get a lot at the newspaper.

We actually do write quite a few positive stories on the regular — just check out the community and sports sections. But this column isn’t about those stories. I’m here to tell you negative news is actually a good thing.

Take, for example, the story of rapper T.I. taking his daughter for a yearly hymen check, to make sure she is still a virgin — despite it being her body (her choice!) and the scientific community declaring this practice as bogus. It’s creepy at best, and promotes an invasive, violating and dangerous practice at worst. Following that story, however, lawmakers in New York state put forward a bill to ban such “virginity testing.” Doctors could lose their ability to practice, others could be charged with sexual assault.

This is a big deal — and, if it goes through, should be seen as a triumph over a practice many didn’t even know happens in the U.S.

Think also of the #MeToo movement. Without so many coming forward to share their stories in the news, would we have seen the same increase in funding for sexual assault survivors? Locally, the Howe Sound Women’s Centre said they’ve seen an increase in people seeking help since the movement went viral in 2017. The need has always been there — now there’s just also more support and more people are aware of how to help.

The news is negative because bad things happen in this world — there’s no arguing that. But we will never have a chance to fix a problem if we don’t know it’s there.

Just think of what could happen if we didn’t shine a spotlight on the darker parts of what happens in any community. In 2018, the Columbia Journalism Review studied what impact losing a local newspaper has on local government— and found that taxpayers pay the cost when a watchdog isn’t present.

That said, you don’t have to read every negative story. You can’t be engaged in a negative cycle of bad news all the time — seek out the positive ones. This week, we have a number of ‘good’ news stories.

This is another reason it is still good to pick up a copy of the paper in print each week. Here, you’ll find a balance of both the good and the bad. What you do with that information is up to you.