'For the uninitiated, baby goat yoga involves practicing yoga — in a field — while baby goats bleat, romp, eat leaves, and, well, sometimes, poop around you.'
Jul 15, 2021 6:44 AM By: Jennifer Thuncher 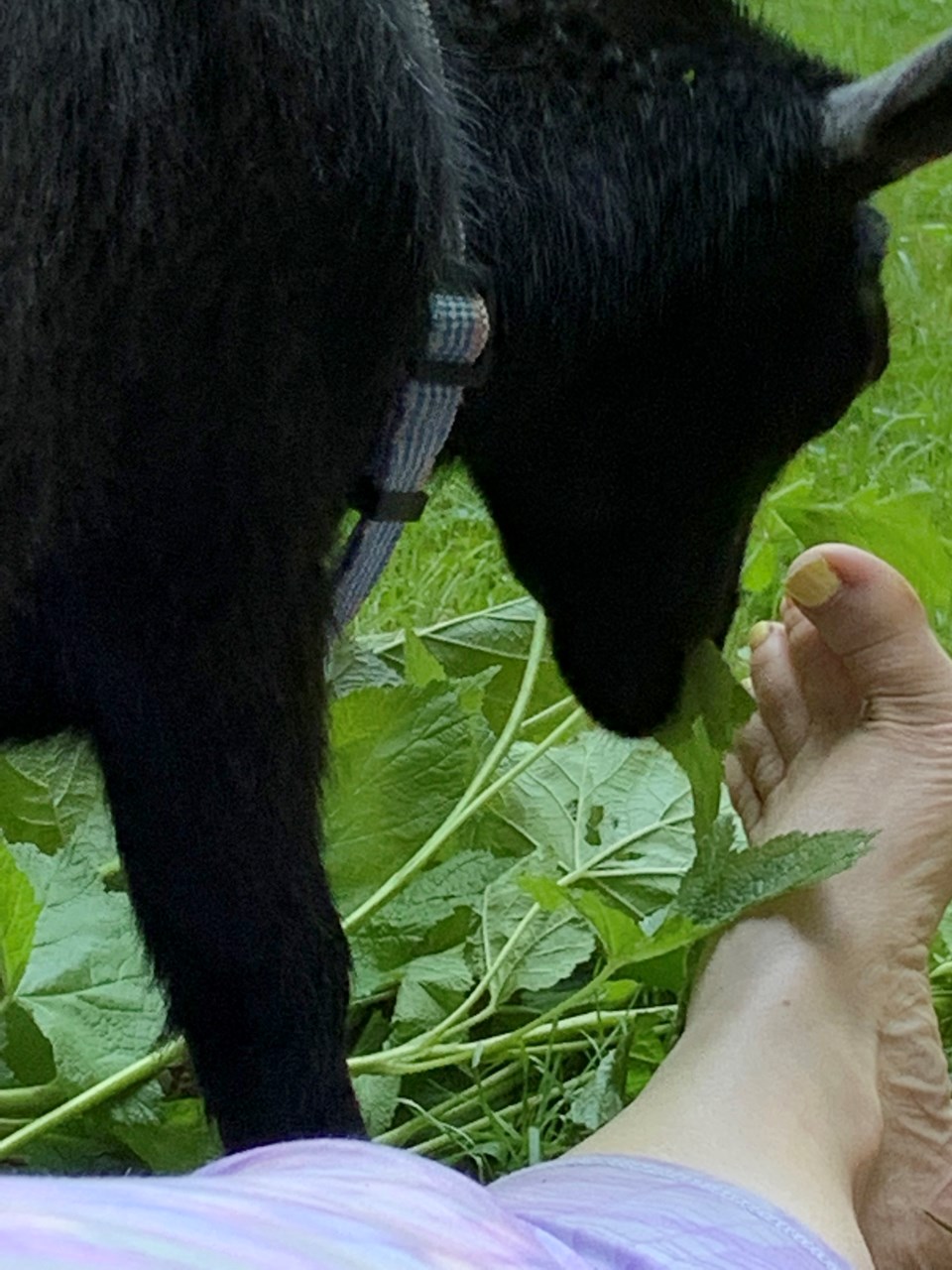 A goat eats around Jennifer Thuncher's foot during a recent goat yoga class. Jennifer Thuncher
It was when the tiny round poop pellets started to fall around my shoulder while I lay in a supine twist that I laughed out loud.

The nuggets fell during a baby goat yoga class I attended recently in the Upper Squamish Valley.

For the uninitiated, baby goat yoga involves practicing yoga — in a field — while baby goats bleat, romp, eat leaves, and, well, sometimes, poop around you.

I ended up there, on the mat, after a therapy session where we discussed me doing something with other like-minded folks.

(Let’s normalize, saying ‘I saw/see a therapist,’ can we? If anyone, it is those who refuse to seek help who should be stigmatized, not those of us who deal with our — er — shit. I digress.)

Likely you, too, are dipping your toe back into in-person group activities after 14 or so months of varying degrees of isolation.

It feels weird, doesn’t it?

Driving out to the class, I had waves of thinking, “What the heck am I doing?”

I envisioned a class of yoga gurus following an instructor who turned herself into a pretzel with ease.

A chubby 51-year-old who had only ever done yoga via YouTube had no business doing this, my mean-girl critical voice whispered.

As my therapy-gifted tool kit has taught me to do, I challenged the voice and forged ahead.

At the farm, I was given a bushel of whatever it is baby goats eat and greeted by the more than welcoming, smiling Simpson.

Once in the fenced-in area of the field, other participants joined. They weren’t all yoga masters as I had feared.

I exhaled a bit.

The adorable goats were soon let in and we began to work through a series of hatha yoga moves that even I could follow.

“Stay focused on your breath, even with the distractions,” Simpson said, as a little black goat bleated into my face.

Giggles bubbled up through the class as similar situations played out at each mat.

Too soon, we were stretching out on our backs at the close of class.

It was then I looked up and saw the tail end of a white goat called Sparkle go up, and I am no farm girl, but I knew what was coming.

I soon learned that the great thing about goat poop is that it’s tiny hard pellets that are easy to brush off.

But gosh, it was funny.

I thoroughly let go and laughed.

I don’t think I had felt so utterly joyful in 14 months.

The whole class is an exercise in allowing joy.

At one point, Simpson said, “Where you are is right where you need to be.”

Rolling up my mat, I realized this is what I need more of as we transition from this gloom and doom era.

I vowed to be back, and I was.