Just about everyone who spoke at public hearing was critical about District initiative
Jul 30, 2020 4:03 PM By: Steven Chua 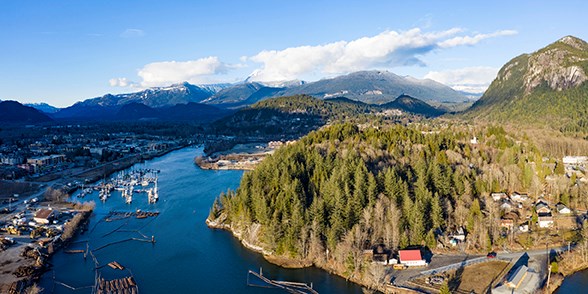 Virtually every member of the public who spoke at the council hearing on July 28 was against the District’s proposed zoning bylaw overhaul.

That evening, except for a few breaks for questions, a steady stream of residents spoke late into the night against the municipality’s initiative to rezone areas in accordance to what it believes to be proper alignment with the Official Community Plan, or OCP.

This was the first public hearing held entirely online as a result of COVID-19 protocols. By the mayor’s count, roughly 100 people were watching, and about 20 of those voiced their opinions about the proposed bylaw.

The omnibus bylaw passed two readings earlier in July and was scheduled on the agenda for a third reading following its hearing on July 28.

District planner Matt Gunn noted there were concerns about having this proposal considered in the middle of summer during COVID-19, but said the matter needed to be addressed quickly.

“Because there is a risk of development occurring that doesn’t align with OCP goals, there is some urgency in having it considered now,” Gunn said.

But as council faced an onslaught of criticism, no one made a motion to give third reading to the bylaw on what was the last meeting before the annual August break.

The hearing concerned all the zoning bylaws that were given second reading earlier this month save for two of them — one concerning a ban on commercial water bottling operations and another involving flood hazard zones in Brackendale.

This pair of proposed bylaws were not discussed because the municipality did not meet the legislated requirements for public notice for these bylaws.

A mix of residents, landowners, developers and activists spoke during the hearing.

By far the subject that drew the most comments was a proposal to replace single-family RS-1 zoning in parts of the Valleycliffe and Garibaldi Highland areas with RM-5 zoning that would allow low-rise apartments.

In a report previously presented to council, District staff said that this rezoning would help meet the OCP’s goal of creating “a range and mix of housing options for residents of all ages, incomes and abilities.”

Some landowners affected by the proposal spoke at the meeting.

Amy Fast, who, with her father, co-owns the Valleycliffe land in question, was critical of the District’s process of consultation.

“There’s no way a developer could get away with that, so why aren’t we holding the District to the same standard?”

She said it’s unclear why the District feels this rezoning is necessary when there’s already a requirement in the OCP for a sub-area plan to be created and approved before a development goes forward.

“We said very clearly that we will do a sub-area plan and all those...housing types will be part of that, and I don’t know how many more times we need to say that,” he said.

He said it appears as if the municipal planning department is “trying to sterilize our land while they figure out what’s going on.”

“Your rezoning is like putting us in the penalty box, and it’s just not acceptable,” he said.

Yi-khy Saw, development manager of Holborn Group, whose land is affected by the proposed RM-5 zoning, asked council to reconsider the proposal.

Holborn is responsible for the University Heights development in the Garibaldi Highlands.

He said RM-5 zoning would move further away from OCP objectives of housing diversity, as the current RS-1 zoning can incorporate more housing types, such as micro homes, when compared with the proposed zoning.

Public comments also included residents and developers who did not own affected land.

Tracey Saxby of My Sea to Sky said she was concerned about the lack of public notice.

She said her organization recommends that a public information session should be had before any hearing occurs.

Tyler Ovington of LTO Developments was of like mind.

“The public engagement overall seems nonexistent, really. I look at other neighbourhoods that are at a much smaller scale. For example, Finch, Wilson Crescent, areas like that [draw] a lot of public engagement...real involvement of the community.”

“And then you look at this one which is a massive spill, and it seems like it’s missed. And I wondered if there’s a reason why?”

Hutchison said that the RM-5 rezoning would essentially sterilize the land, as it’s impossible to recoup costs with the density specified in that zoning.

He said that the District’s rezoning process would make it very hard for developers to secure loans from banks.

“The Tier 1 banks really decide when and where a developer builds,” said Hutchison.

“If you do place this RM-5 zoning, and you vote in favour of this tonight, you may, in some opinions, have fulfilled the wishes of the OCP — though I struggle to see that, really — but, what you will have done is send a very, very clear message to the financial institutions in Vancouver and Toronto that you better be careful in Squamish, because a piece of land can have its underlying rights changed without the consent of the landowner. That will affect every developer and every development in Squamish. I promise you,” said Hutchison.