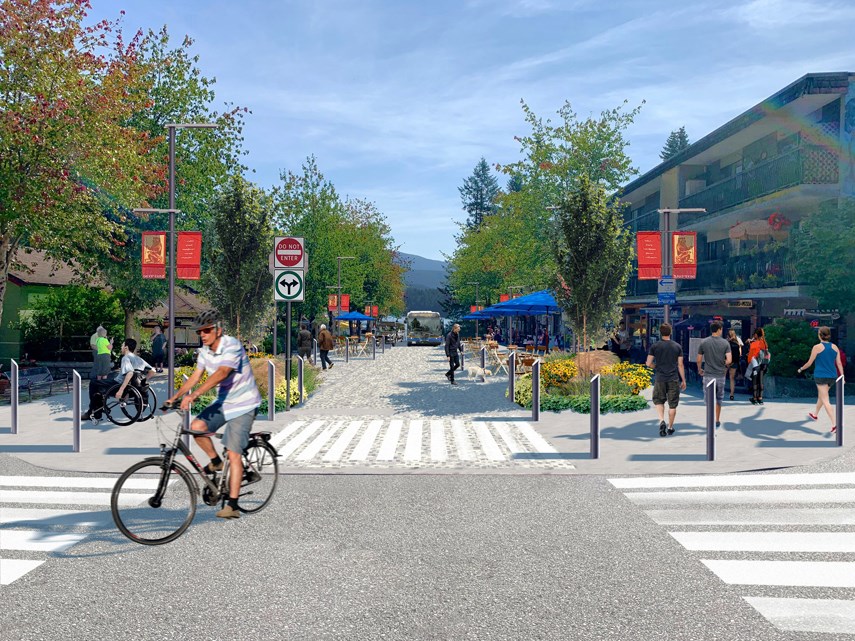 An artist's rendering shows how Gallant Avenue in Deep Cove could look once a portion of the street has been permanently converted into a pedestrian friendly plaza.District of North Vancouver

One of the most picturesque spots on the North Shore is about to get a whole lot more pedestrian-pleasant thanks to major federal and provincial dollars flowing into Deep Cove.

“The redesign will consist of a plaza, sitting areas, lighting, sidewalks, trees as well as other related roadwork,” Wilkinson said. “Furthermore, the plaza will help accommodate seasonal and community needs such as summer festivals and markets, and additional parking spaces year round.”

District of North Vancouver Mayor Mike Little welcomed the funding, which council applied for in January.

“We're all very excited about the opportunity that this project presents for our community,” he said.

Starting on Monday, the district will launch a page on its website that will show potential layouts for what lower Gallant Avenue could look like, and seeking residents’ feedback on which one council should pursue. All three options involve making the current outdoor dining/pedestrian area on what used to be Gallant Avenue permanent.

“While it's been a very popular program, it's really been quite informally done and we would bring it up to our proper safety standards where there wouldn't be ledges and lips,” Little said.

Even without a major funding boost, Gallant’s streetscape was tired, cramped and in need of upgrades, Little said.

“It’s always fun to have a visioning exercise for community for such an important space. I live in the area, so I'm down there all the time, and you definitely have seen the age in the area.”

Little acknowledged that some Cove residents may already be “fatigued” with the volume of visitors who arrive in the neighbourhood, but he said the district will be looking to incorporate their thoughts into the final design. Everyone living in the Deep Cove and Dollarton neighbourhoods will receive a mail-out specifically inviting them to help decide which option the district should go with.

“When you have a dramatic change to an area, you can help to solve some of the things that people are concerned about,” he said.

The feds are putting up $2.65 million for the $3.3-million project via their COVID-19 Community Resilience grant program. The province, meanwhile, is kicking in another $663,000.

Burnaby-North Seymour Liberal MP Terry Beech invoked one of the Cove’s most famous businesses at the announcement, saying he was looking forward to meeting constituents there again soon.

“I've been dying to go to Honey [Doughnuts & Goodies] for a little over a year now, and now that we’ve started moving back to normal, we don't just have doughnuts to look forward to. We’ll have a new and improved space that is really going to benefit everyone in our community.”

North Vancouver-Seymour NDP MLA Susie Chant said the work would result in both short-term jobs and a lasting economic benefit but she also stressed how much it could improve the area.

“Once complete, it will bring new energy to the village. Public spaces like this make life better for people in the place that they call home. They bring people together to make memories, and create an inclusive place for people to celebrate,” she said.

Gallant is currently in the process of being torn up to replace a 70-year-old storm drain running underneath. Little made clear that the two projects are not connected.