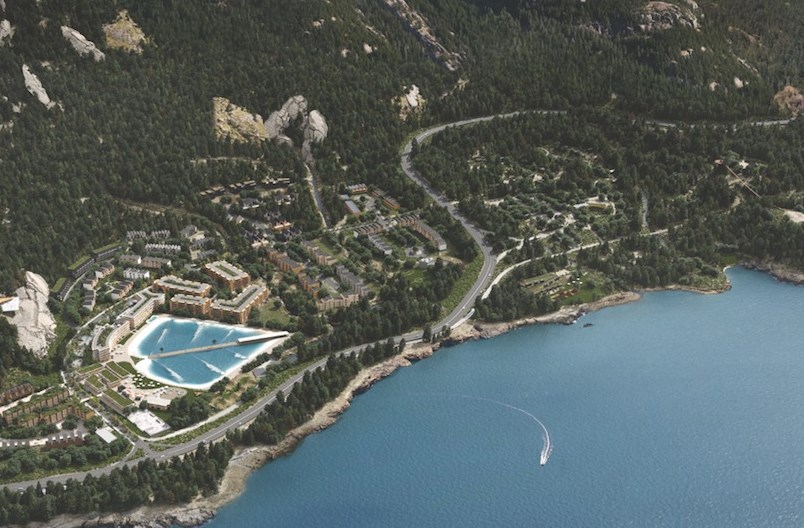 A rezoning for a major development south of Squamish is still awaiting first reading at the Squamish-Lillooet Regional District (SLRD).

The proposal was back in front of the SLRD board on March 24, and the developer hopes the board will consider first reading at an upcoming meeting.

“It’s a big project, and it’s going to take time to make everyone comfortable with the whole proposal, and we feel like we’re pretty much there,” said Tony Petricevic, head of development with Tigerbay (formerly Taicheng Development Corp.).

“The staff have been really good to work with … I hope that we’re one meeting away from getting to first reading.”

The project’s master plan envisions four development phases, starting with the surf park—powered by a company called Wavegarden—and some commercial opportunities in Phase 1.

Surf park technology has finally reached a point where it’s financially feasible to build from a business perspective, Petricevic said, adding that the proposal has already garnered interest from CSA Surf Canada and other surfing enthusiasts.

“The actual surfing industry has accepted these artificial waves as well, and so it’s taken off internationally, these surf parks,” he said.

“What it’s really done is allowed for athletes to train and get better, but also to grow the sport.”

Phase 2 will include about 250 to 300 homes—a mix of duplexes, townhouses and apartments—at market prices, Petricevic said, comparing the community aesthetic to Bosa Properties’ Sea and Sky development in downtown Squamish.

“That’s a good comparison of a community which would be similar in style, whereby there will be a focus on modern architecture, and for lack of better words, well-priced housing, which young families can afford,” he said.

The entire four-phase master plan allows for up 1,050 homes: 900 market houses and 150 rental apartments, 50 of which will be affordable housing units.

If the majority of the rezoning is finished this year, the surf park could open by 2024.

But the proposal is a massive development with a lot of moving parts, said SLRD chair Jen Ford.

“So it’s going to change the landscape of the lower region, and I’m excited about it. I think that there’s a lot of really good ideas, and we’re just kinda nailing down some of the commitments at this time. So it’s a big process.”

Some of the main concerns from the SLRD board to date have been about water usage—where it comes from, how it’s treated, and where it ends up, Ford said.

“We recognize that the Howe Sound, over the last 30 years, has come back to a really healthy ecosystem, and so you don’t want to upset that after so many years of restoration, and real commitment from the whole area,” she said.

“So those are big questions that need to be answered before we move forward.”

Other lingering questions include things like labour, energy use, the impact on Squamish’s employment base, and services for the new proposed community, Ford added.

The proponents are planning another open house as they work through the rezoning, and comments can be submitted to info@southbritannia.com.

A public hearing will also be part of the process.

This Bowen Island property has everything you need to live off the land (PHOTOS)
Apr 25, 2021 2:56 PM
Comments