California won't lift its mask requirement for another month 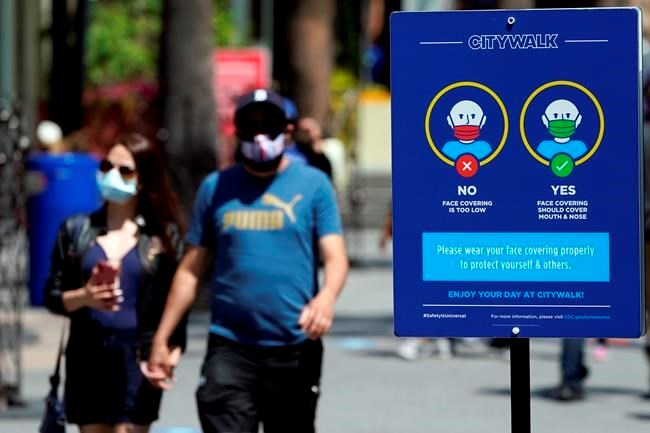 “This four week period will give Californians time to prepare for this change, while we continue the relentless focus on delivering vaccines particularly to underserved communities and those that were hard hit throughout this pandemic,” Ghaly said.

Many other states lifted their mask requirements last week after the U.S. Centers for Disease Control and Prevention said it’s safe for fully vaccinated people to skip face coverings and social distancing in most situations.

“On June 15 California plans to implement CDC’s guidelines around masking to allow fully vaccinated Californians to go without a mask in most indoor settings,” Ghaly said.

California Gov. Gavin Newsom already has said that if cases remain low the state will drop nearly all COVID-19 restrictions on June 15.

Until then, California will keep its rules saying people who are fully vaccinated against the coronavirus do not need to wear a mask outdoors unless they are attending crowded gatherings.

But the state has said they still must wear masks indoors unless they are meeting with other vaccinated people. The state has other rules for businesses and other public places that vary by county under its color-coded tier system, which is based on the prevalence of the virus.

Businesses are expected to adhere to the state’s guidelines, Ghaly said. That four-week delay will help businesses prepare for the transition to fewer restrictions, he said.

He noted that the CDC has said that it will keep the mask requirement in place for students for the rest of the calendar year, and said California will do the same.

Newsom initially gave conflicting previews last week on when the state might lift mask restrictions as it approaches a full reopening of its economy planned for June 15 with infection rates dwindling and inoculation rates rising.

On Friday, he said health officials were weighing “a whole host of complexities” including how to enforce a policy where some people are allowed to go unmasked and those without vaccines should still be wearing them. There also are issues around businesses that may want to still require masks for all, and at schools, where children under 12 still cannot be vaccinated.

More than a dozen states quickly said they would follow the new federal guidelines, but others were like California in weighing their response. Some retailers were also split, with Walmart, Costco and Trader Joe’s saying Friday that they won’t require vaccinated shoppers to wear a mask unless state or local laws say otherwise.

Newsom’s former chief of staff, Ann O’Leary, was among those upset by the CDC’s decision.

“My blood is boiling that @CDCgov acted so irresponsibly to adopt an 'honor code' for public mask wearing,” she tweeted. “It’s not good public health advice to say to parents whose kids can’t get vaccinated, just trust the public to do the right thing with all the politicization over masks.”

Newsom, like the Biden administration, has been under pressure to ease mask restrictions particularly for those who are fully vaccinated and as coronavirus cases ease nationwide.

The governor is facing a recall election this fall driven largely by frustration with his handling of the pandemic.