All proceeds donated to the Urban Native Youth Association
Dec 5, 2019 9:07 AM By: John Kurucz 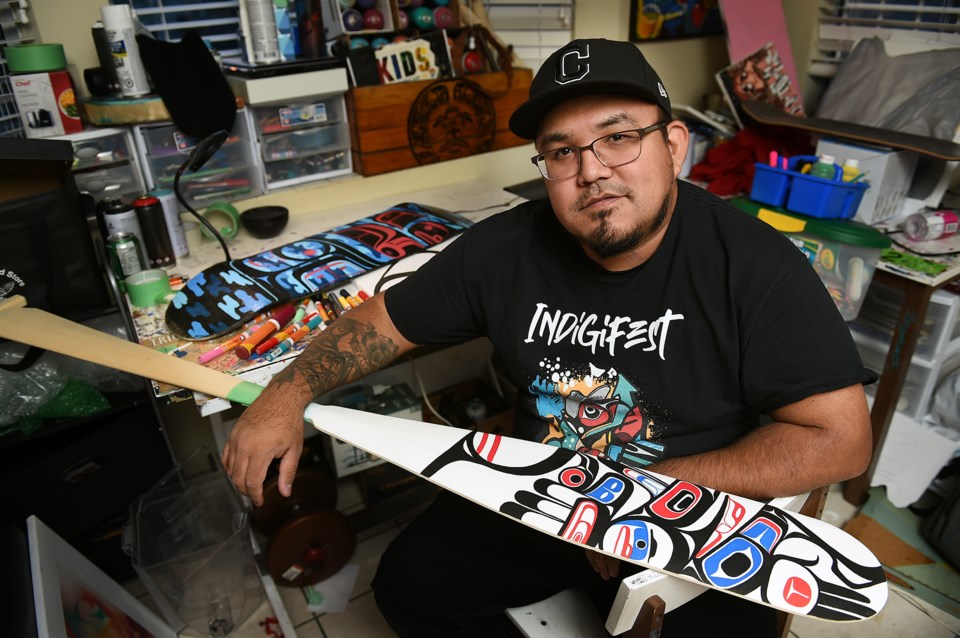 East Vancouver artist KC Hall will have a bentwood box up for grabs this weekend, which is based on a similar piece of art found by his family near Bella Bella that’s believed to be upwards of 140 years old.Dan Toulgoet

Being a graffiti artist has taught KC Hall some invaluable lessons in time management.

In a past life, the Vancouverite had to make every second count as he and his crew would work under the cover of darkness for hours to leave their mark without being detected.

Those days of straddling the lines of legality are now behind him, but Hall still adheres to the mantra of making every second count.

“When we did pieces down in train yards or other massive productions, we had to be in there and out of there in a very short period of time,” Hall said. “I’ve carried that over to my work now.”

Hall is one of more than a dozen Indigenous artists taking part in this weekend’s annual Bentwood Box Silent Auction at the Museum of Vancouver.

Running 5 to 8 p.m. on Dec. 7, the event will include an artist reception and exhibition, along with a silent auction from which all proceeds will be donated towards the Urban Native Youth Association.

The show will include each of the 17 participating artists offering their own takes on the bentwood box — a type of Indigenous art found specifically in the Pacific Northwest.

Made predominantly from red or yellow cedar, the boxes are employed in all manner of uses: storing clothes or other objects, transporting goods, cooking or for ancestral burial remains.

Hall’s design is based on a series of photographs sent to him by family members from his First Nation near Bella Bella. His cousin and uncle happened upon a bentwood box hidden under a rock bluff near Roscoe Inlet thought to be around 140 years old.

The distinctive curves, lines and red colour scheme — referred to as formline art — found on the box signify that whomever painted it was a fellow member of the Heiltsuk First Nation. Hall and company believe the box likely contained the belongings of a chief who died around 1880 if not earlier.

“The image of the box really struck a chord with me,” Hall said. “I was amazed that something of that calibre was just sitting untouched for well over 100 years.”

Now 33, Hall has immersed himself in art from a young age, moving from random doodles and scribbles to graffiti. While graffiti still plays prominently in his output, Hall also dabbles in murals, painting and graphic design and customized skateboards.

The East Vancouver resident has had two murals included in Vancouver Mural Festival over the past two years and presented a blanket to Prince William and the Duchess of Cambridge when the royals visited B.C. in 2016.

He keeps coming back to graffiti, though his relationship with the art form has changed over time.

“There’s a group of so-called graffiti artists who only do house fronts, bus stops and trains and it’s not like the art of graffiti, it’s more a case of throwing your tag up and having a tag everywhere,” Hall explained. “In my mind, those people are vandalists, they’re not graffiti artists because graffiti takes a level of expertise from every level of your life’s course.”

This weekend’s show and auction runs from 5 to 8 p.m. For more info, see lattimergallery.com.