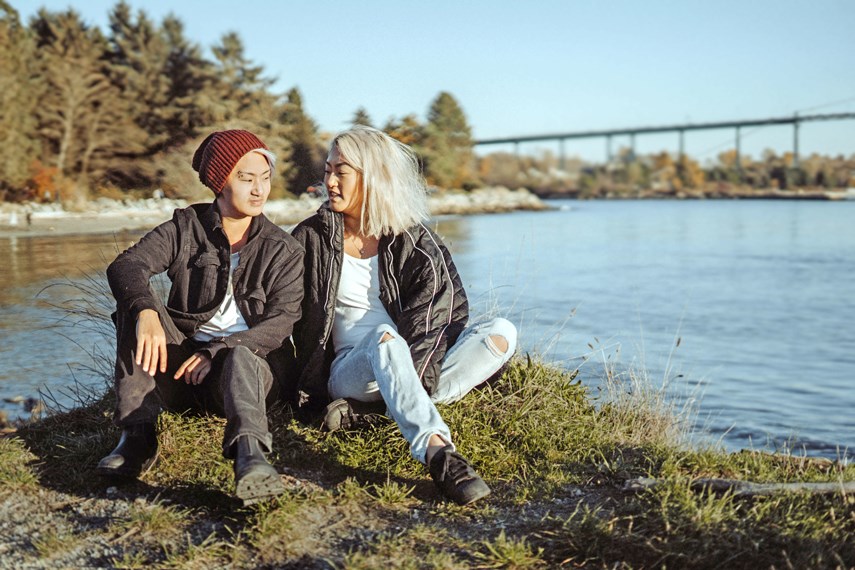 Twins Levi and Kailyn Nahirney take in the North Shore with the Lions Gate Bridge in the background. A new documentary on Levi's life and story as a transgender teen is being released on July 16, 2021.Mina Lumena
For most of us making our way through this thing called life, becoming yourself and accepting who you really are is just part of the long, strange trip.

At times, it’s been extra hard for Levi Nahirney – though he couldn’t be happier with where he is now.

At seven months old, Nahirney and his twin sister, Kailyn, were adopted from Vietnam to loving parents in North Vancouver.

Although life at home was good, Levi experienced feelings of dysphoria and internal conflict as he got older, sensations he couldn’t quite identify until, suddenly, he could.

It was simple: although assigned female at birth, Levi knew he was in fact a boy.

At 13, Levi came out to his family as transgender. At 14, he officially started living as a teenage boy. His body changed, his voice lowered and he connected with others going through similar transitions.

Still, he faced plenty of challenges.

As a teen, Levi moved through three different North Shore high schools, escaping bullies and the feeling that he just couldn’t take it anymore along the way.

“I never enjoyed high school,” he says. “I do think that people are learning to change and learning how to be open-minded, but I also can see a lot of people still being stuck in their old ways.”

Levi discusses those old ways, along with amazing new beginnings, in a new documentary, Levi: Becoming Himself, which comes out next week.

The film explores Levi’s journey as he navigates his gender identity and transition with the support of his family, ultimately growing into the person he knew he always was.

“The basic plot is just me figuring out myself and sharing my story with people in the city. I’m hoping to share my story with everyone,” he says. “Maybe we’ll find people out there who have the same struggles and have something of the same story that I’m going through – I’m hoping that it’ll help someone.”

The hour-long documentary features interviews with Levi, his sister and parents, exploring a life that’s been full of complexity and at times, pain, but also full of love.

Although Levi admits his twin sister was initially taken aback when he told her he was transgender several years ago, she has since become one his most vocal proponents.

“She was mourning the loss of a sister but gained a brother. I think she’s one of the biggest supporters that I know,” says Levi.

For writer and director Shannon Kaplun, Levi’s story was an opportunity to showcase the complexities of identity in general.

“Being adopted, sense of nationhood, sense of culture, being an ‘identical’ twin, and of course gender and sexuality – there are so many layers of identity to figure out ‘Who am I and where do I fit in the world?’” says Kaplun.

Now a young adult, Levi is studying cosmetology in Vancouver and fully embracing the person he knows he is – it’s a feeling of self-acceptance he hopes his documentary can help others embrace as well.

Still, like all of us keeping busy and idling our time on the big blue planet, Levi knows we’re all always a work in progress, just like the name of the documentary is meant to imply.

“I’m definitely many steps closer to the person I want to be, but there’s still so much I want to do to make myself feel like I’m actually me.”

Levi: Becoming Himself launches as a part of the Absolutely Canadian documentary series on the free-to-use CBC Gem streaming service July 16 and premieres on CBC TV in B.C. July 17 at 7 p.m.