The propeller pushed the artist forward. At its peak in the 1930s, the Hollyburn Ferry, prior to the construction of the Lions Gate Bridge, provided service for those looking for a direct route between Vancouver and West Vancouver.
Aug 2, 2019 7:51 AM By: Ben Bengtson 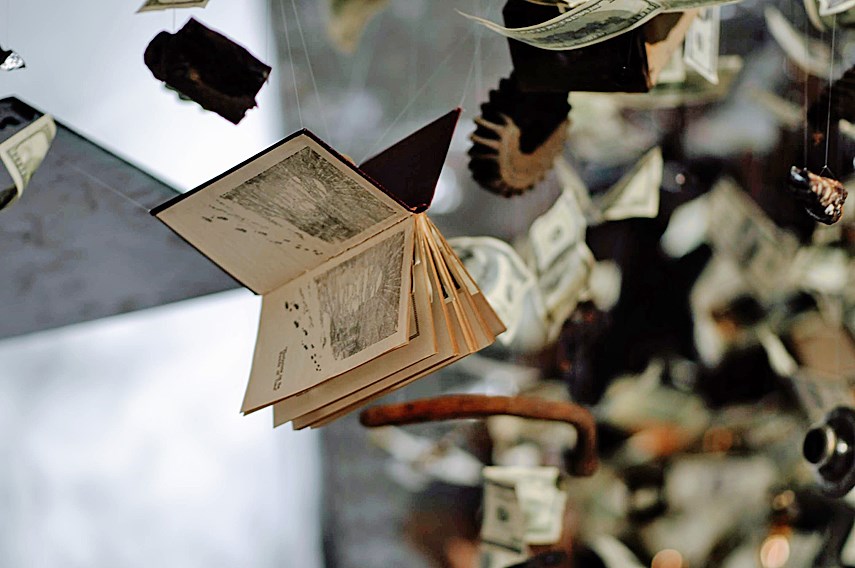 The propeller pushed the artist forward.

At its peak in the 1930s, the Hollyburn Ferry, prior to the construction of the Lions Gate Bridge, provided service for those looking for a direct route between Vancouver and West Vancouver. Decades later, the ship sank – but it was eventually salvaged and a 600-pound propeller was recovered. North Shore artist Benjamin Lumb has since turned that propeller into an art piece as part of his current collection.

Those ideas are on display as part of Lumb’s “New Life” collection at the Grosvenor Ambleside building in West Vancouver. Using salvaged metal and other materials from throughout Metro Vancouver’s history, including pieces from shipwrecks, buildings, and personal collections, Lumb’s “New Life” collection seeks to explore “the memory, form and history of forgotten objects,” ultimately repurposing these objects in bold new ways.

On display at the Grosvenor building are also two pieces which Lumb sees as the “pinnacle pieces of this series,” Hercules No. 7 and Safe Explosion.

Lumb, who is from North Vancouver, was contemplating all the people that would have passed through the Shipyards in Lower Lonsdale throughout history and “defined the city that we’re in now” when he had the eureka moment regarding a number of objects he’d come into possession of.

A woman had given him an old hotel safe which her dad had recovered from the famous Alcazar Hotel in Vancouver. Lumb held onto the object while considering what to do with it, he says, until, eventually, he found the direction he wanted to take it in.

For the “New Life” collection, Lumb took Safe Explosion in a whole new direction, opting to take conceptual photography of the sculpture itself and then juxtaposing those images alongside an imposed landscape which evokes a horizon.

As for Hercules No. 7, a 12.5-foot tall sculpture that involves a recovered piling hammer which was likely used by ships along the Scottish shores and was recovered at the Shipyards site, Lumb added a number of contemporary finishes to the otherwise rustic structure – which posits the formerly derelict object in a new light. A series of mirror-finished discs, outlined like an hour glass, protrude upwards from the base of the old piling hammer, depicting the passage of time and movement, according to Lumb.

But the 39-year-old artist is not too prescriptive with how he thinks viewers should interpret his work.

“[Each piece] can be seen individually because people can attach their own metaphor to most of them, which is something I really strive to do with my work. I want to create work that somebody can look at regardless of the meaning of my story – they can attach … their own meaning to it regardless of what it means to me.”

An experienced stoneworker by trade, Lumb has always possessed a true affinity for materials. His inspiration for taking his professional skillset and turning it towards making art was spurred while travelling the world in his 20s and into his 30s – he met new people, learned new ideas, and all of sudden felt compelled to start creating structures and sculptures with an artist’s flare. “It’s more out of necessity, I don’t really feel like I have a choice,” he says.

Almost five years into his art career, Lumb has already begun venturing into new territory following his forays with exploring the manifestations of formerly forgotten objects.

“Without working with objects and creating these works through these objects, I wouldn’t likely be able to take the next inevitable step in my career as an artist, which is creating a concept first and then building something, whereas these works, this series is object recovery – thinking about the object, what it’s past life was, and how to show it in a new life and a new form.”

Lumb, along with artists Thoma, Madison Tyrell, and Chris Cooper, invite people to attend the gallery at Grosvenor Ambleside for an evening of art, music and libations tomorrow from 8 to 11 p.m. in conjunction with the Harmony Arts Festival.