From Squamish to Colombia and back 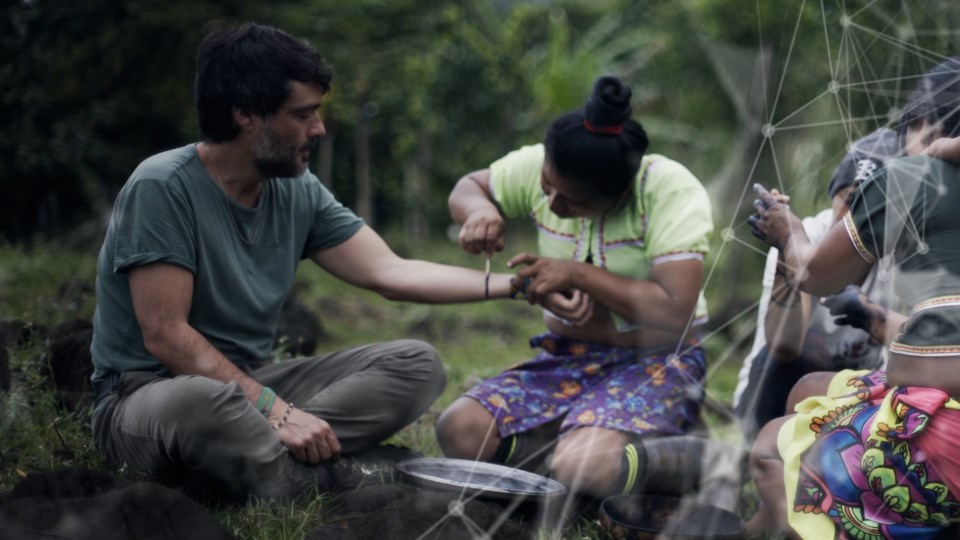 Sonic Forest is not like any environmental justice film you have ever seen before.

For one thing, it has the star power of actor Joaquin Phoenix presenting it; a powerhouse Colombian rockstar in Simón Mejía of Bomba Estéreo leading viewers through it; an accompanying song and music video of the same name by the band; and, it serves as an example of what is possible under the threat of climate change and human violence.

Thome is also a producer and an executive producer of the piece.

"I don't want to say, 'Here's the problem.' I feel like everyone gets that," Thome told The Chief when explaining how this documentary is different. "I want to find the melody and the heart and the connection and inspire people to engage in being part of the solution."

Thome moved to Brackendale about seven years ago from Vancouver.

"When we had kids, like so many people in the region, we knew that Squamish was where we wanted to be," said Thome, who is a veteran filmmaker and National Geographic explorer.

The visually stunning Sonic Forest showcases Colombian Pacific Coast communities that are safeguarding more than one million hectares of rainforest.

It is filmed in  the villages of Mutatá, Bajo Calima and the region of Bahia Malaga.

These Indigenous and Afro-Colombian communities "have been the guardians of their forests for centuries. But recently, they have come under threat from deforestation and degradation caused by activities from mining to palm oil. Now, alongside Stand For Trees, they are developing new, sustainable economies and receiving essential services, supported with results-based payments for reducing deforestation," reads a news release for the documentary.

Viewers come along with the filmmakers to visit two of eight projects that are a result of collaborations with crowdfunding platform Stand For Trees.

The projects prevent 70 million tonnes of carbon emissions and empower 60,000 residents, according to the release.

One project is Macaw Habitat Conservation located in Mutatá, which protects 42,000 hectares of tropical forest.

The second project, the Afro-Colombian Mangroves and Forests, which "protects 104,000 hectares of native forest, supports the sustainable economic development of local communities through training and technical assistance in agriculture, fisheries, and ecotourism, and has created new jobs in forest patrolling and scientific research."

The 32-minute documentary is a treat for the ears as much as the eyes and mind because sound is as much a character in the piece as the people and the environment.

In addition to music, which is played throughout by the locals they visit, there's audio of birds, water rushing over rocks, fire crackling, the banging of shells, and more.

"The forest is like meditating. You go into a special trance and the sounds are a key part of the process," says Mejía in the documentary.

"Everything is connected. It is musical in some kind of way."

Music works as a social bond, as well, that maintains relationships in families and communities, a local says in the documentary.

Thome said he is intimately aware of the issues around white Westerners heading to parts unknown and presenting their interpretation of a place showcasing their solutions as saviors.

He said that is the opposite of how he works.

Thome quotes Indigenous Australian activist Lilla Watson to encapsulate how he approaches the communities he works with:

"If you have come here to help me, you are wasting your time. But if you have come because your liberation is bound up with mine, then let us work together."

Before filming the documentary, he and other members of the crew travelled to Colombia to meet the community members and share the vision for the project with them.

"Part of the reason I was interested in this project is because it is community-driven. The communities are in control," he said.

Only when there was buy-in on the documentary's vision on all sides, did the project proceed, he added.

One tweak they wanted was that community leaders not be named in the film, to protect their safety. *

"Things we wouldn't have thought of," Thome acknowledged. "A lot of community leaders have been killed in Colombia. It is a rampant situation right now."

The community members also had a chance to review a rough cut of the film and were happy with it, Thome said.

The connection with Phoneix started with his brother, actor River Phoneix.

Thome met River in the early 1990s and spent a day with him at his home in California.

"It was just a really great connection and we he got involved in the environmental project I was working on.

After the actor's death, Thome stayed in touch with the Phoenix family and has been involved in numerous environmental projects with them.

"They have always been there to help me when I just have a paragraph," he said.

Joaquin jumped at the chance to lend his name to help promote Sonic Forest.

"For people in Squamish and around the world, I hope they take some inspiration from [Sonic Forest] and I hope that people are able to engage with it as well and support this work," he said.

Through Stand For Trees, viewers of the documentary can buy certificates that represent carbon credits that prevent carbon dioxide from entering the Earth’s atmosphere due to the Pacific Forest Communities’ projects.

To find out more go to standfortrees.org/sonicforest

*Please note, this story has been corrected since it was first posted. The crew were aware that local leaders' names could not be used from the start of production, which was not clear in the earlier version of the story.