How Whistler helped sculptor Stephanie Lowe journey back to art

See pieces by the Black Tusk Village artist featured in Small Wonders at the Foyer Gallery
May 21, 2021 2:00 PM By: Alyssa Noel 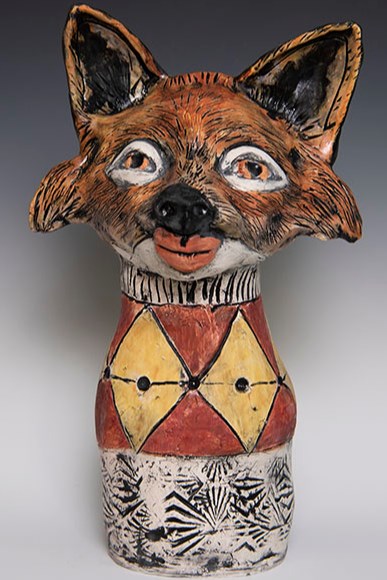 This fox sculpture is just one of 13 pieces Stephanie Lowe will have featured in Small Wonders at the Foyer Gallery. Photo submitted

Stephanie Lowe might have an arsenal of compelling personal anecdotes, but there’s one in particular that she says sums her up best.

She and her husband Murray were living in L.A. when he got offered a job in Whistler. Lowe, an American originally from New York State, had never been to the resort.

“[Murray] said, ‘I got offered this opportunity in Whistler, Canada,” she recalls. “I was like, ‘Cool. Let’s do it!’”

That’s how, in 2018, the couple became new Whistlerites—sight unseen.

The move might have been spurred by Murray’s job, but it ended up being equally fruitful for Lowe. While she had started her career as an artist—earning a Bachelor of Fine Arts with a major in sculpting from the University of Central Florida, after getting married and having kids—her life unexpectedly took her down another path.

After relocating to L.A., Lowe had been researching opportunities for ceramicists in the art scene when she came across a program called Free Arts for Abused Children. “Something dragged me there,” she says. “I finally got into their training program and it lead to [teaching art in a] level-four lockdown facility for damaged teens.”

Her learning curve was steep. She quickly discovered lessons like the coil-bound sketchbooks she wanted to bring the kids weren’t allowed (the metal coil proving too dangerous) with the same holding true for her typical sculpting tools.

Still, she says, “it sparked a passion. I loved my studio, I loved what I was doing, I wanted to continue being a full-time artist, but what happens to kids with trauma when you give them the tools for art, it impassioned me.”

Ultimately, that led to her earning teaching credentials and working in tough, inner-city L.A. classrooms.

While she loved the work, she realized her plan of focusing on her own art in evenings and on the six-week summer break was not realistic.

“It possessed me,” Lowe said. “When I first started I thought, ‘Well, I’ll teach during the day and work in my clay studio at night or in the summer.’ It literally took everything out of me. I had no creativity left.”

So, when the prospect of moving north to the mountains came up, she realized it could be a good opportunity to retire from teaching and throw herself back into her art.

It turns out, that instinct was right. While it took a while before their Black Tusk Village home was renovated, once Lowe had her studio space, she immediately set to work again.

While she first started her sculpting career working in woodcarving, clay has long been her medium of choice.

“I love clay,” she says. “A lot of my work has feminist leanings—even though a lot of men use clay, the medium itself is like a woman. It’s malleable and forgiving, but push her too far and she breaks.”

To that end, holed up in her studio throughout the pandemic, Lowe has been prolific in creating both functional art and sculptures.

“This is just the start for me,” she says. “COVID, as horrible as it’s been and tragic for so many people, it’s allowed me to stop and make … It’s one of the things I can feel gratitude for.”

Lowe will have 13 sculptures featured alongside the work of textile artist Lorna Moffat. They will run the gamut from her popular figure vases to different characters wearing masks. “I’ve done masks for many years and I returned to it because masking is such a big subject for all of us now,” she says. “I almost want to say tongue-in-cheek, remember when masking was fun?”

Small Wonders runs at the Foyer Gallery from May 21 to June 29.