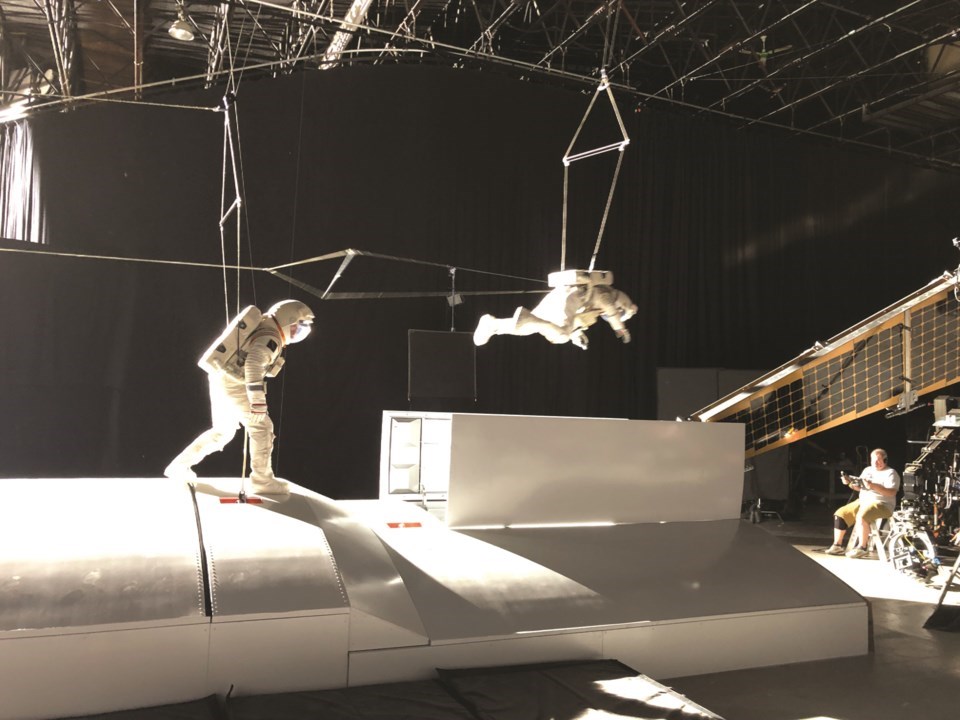 Pemberton’s Tyree Trand is the key stunt rigger responsible for making the actors in Netflix’s Away appear to be floating.Courtesy Tyree Trand

There’s a scene in Netflix’s new show, Away, where an astronaut named Ram—or rather, actor Ray Panthaki—is deliriously ill, and, in the midst of a hallucination, tries to escape by opening  the ship’s airlock. (As in, the door that leads to outer space and the entire crew’s certain death.)

His four fellow crew members struggle to restrain him, all while floating around in the zero-gravity spaceship, before he can open the door.

In reality, all five actors performing in the scene were suspended in the air at one time during its filming, constantly moving around in order to hit their marked positions.

“It was quite a complicated scene that took a lot of work to get it right, but yeah, it looked pretty good,” Trand says. “I was happy with that.”

The series follows astronaut Emma Green, played by Academy Award-winner Hilary Swank, as she commands an international crew undertaking the first manned expedition to Mars. About 95 per cent of the show was filmed in North Vancouver over a six-month period, with production wrapping up in February of this year.

The series was released on the streaming service on Sept. 4, and at press time, was Netflix’s fourth-most-popular show in Canada.

As Trand explains it, a key stunt rigger is typically in charge of any scenes where characters need to be suspended off the ground. “So that might include superheroes jumping through buildings or falling off buildings, or climbing up something or flying, or hovering, or things of that nature,” he says.

Or, say, floating around a spaceship.

“The zero-gravity work that we did for Away was very challenging, not because it’s violent or dangerous, but more because the look that we were going for—zero-gravity—is very intolerant of any kind of flaws, any kind of slamming or abruptness or stutters in the movement,” he says.

“There are things you don’t think about when you’re in zero-gravity, so if you’re hanging off wires, your limbs wouldn’t hang vertically, they would have no weight. There’s a lot of training that went into the process with the characters before we ever did any filming.”

Trand says the cast and crew went through weeks of “space boot camp”—including consultations with a real-life astronaut on loan from NASA and core-strengthening work that Trand says basically amounted to “a couple hours of pilates every day”—before filming commenced, in order for the actors to learn how to appear weightless and avoid looking limp while hanging in harnesses.

Since it’s a drama, the stunt work on Away also required a “deeper involvement” in the production than some of the quick, high-flying action scenes Trand is typically used to working on, he says.

Usually, “we’ll inject the stunt double who does the dangerous bit, often at high speed, because it’s a stunt. And then the real character gets inserted back into a scene.”

While, in comparison, almost 100 per cent of the stunt work on Away was done by actors, stunt doubles did come in handy while planning out scenes, Trand explains.

“For the first time in my career, we actually had stunt people learning lines. Because it’s a drama—it’s slow, it’s not an action show—we found that the movements were really dictated by the dialogue and the emotions being conveyed during the scene,” he says. “In order to get the movements correct, we needed to pretend we were actors and our stunt people would actually need to say things like, ‘Well, after this line I think I would want to go over here.’ And so we’d say ‘OK, if that feels right let’s build a rig that takes you from here to there.’”

During shooting, Trand manned a crew of four to six riggers at any one time, who he says almost all live in the Sea to Sky. “A lot of us have a climbing background,” he says. “Our wire systems are very sophisticated and complicated in some cases, so having hands-on experience with ropes, carabiners and wires and anchors and all that stuff has been very useful.”

He adds, “Most of the guys I work with are deep into adventure sports, and part of our vocabularies is just ongoing risk management—that’s what we do every day. So, all of us are climbers, mountain bikers, dirt bikers, skiers, whitewater people, paraglider pilots—we’re all outdoor nuts who don’t do offices very well. This has been a way that I’ve been able to earn a real living and do something that’s enjoyable and creative.”

Prior to transitioning into the film industry full-time, Trand himself dealt with risk management on a daily basis while working as a heli-ski guide and river guide.

Risk management is key in an industry where one accident could destroy the reputation he’s built over his career, Trand adds. “There’s not a rig that I build that I wouldn’t put my grandmother on, or my family,” he says. “I have to think of it in those terms.”

Trand, who’s been working in the industry for more than two decades and living in Pemberton for just as long, landed the Away gig through the Sea to Sky-based stunt coordinator he’s been working with for the last three years, Jeff Aro.

Notable titles Trand’s worked on include films like Deadpool, The Predator, War for the Planet of the Apes, A Dog’s Purpose, X-Men: The Last Stand and the Twilight Saga, as well as TV shows like Once Upon a Time, Lucifer, Lost in Space, The Flash and The 100, among many others.