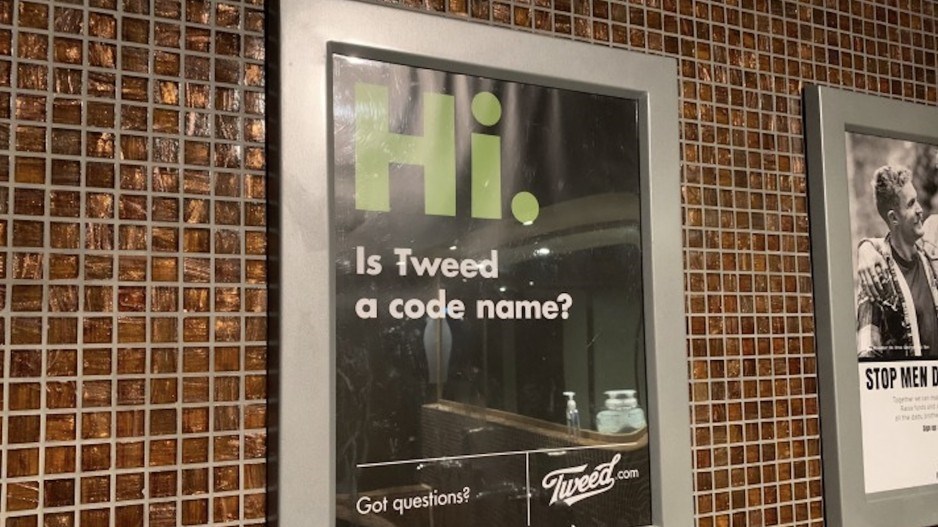 Canopy Growth Corp.'s cannabis brand Tweed after cannabis was legalized had advertising in frames above urinals at bars, such as the Fountainhead Pub and the Imperial in Vancouver. Photo Glen Korstrom/Business in Vancouver

The B.C. government has banned advertising and anything else that could be construed as promoting cannabis in licensed establishments. That includes restaurants as well as bars, and it is in effect for events that have special permits.

"In keeping with the province’s public health messaging about the dangers of cannabis and alcohol co-use, this new policy prohibits the promotion of cannabis on any liquor-licensed premises and at events held under a special event permit," the Liquor and Cannabis Regulation Branch (LCRB) said in a policy directive that Business in Vancouver obtained.

"In accordance with section 15(1)(b) of the Liquor Control and Licensing Act, this prohibition is now in the terms and conditions of the special event permit, as well as the following licence types:

Cannabis producers have long known that they would have to walk a fine line to avoid breaking the law when trying to raise consumer awareness of their brands.

They have had to stick with plain-packaging rules that ensure blandness, with no testimonials (such as by celebrities), attractive colours or images.

They have also been forbidden, like tobacco manufacturers, from advertising in places where the content could be attractive to those younger than 18 years old. That means no radio, television or newspaper advertising. They also are forbidden from advertising their prices.

Health Canada, before Oct. 17, 2018, when legalization went into effect, revealed that it had already warned a handful of unidentified cannabis producers about their marketing initiatives.

Those companies may have been Canopy Growth Corp., which owns the Tweed brand, and Aurora Cannabis, given that those companies both bought billboard advertising in Toronto.

One way that these companies had believed that they would be able to market products in a bland way would be to put their brand and a cryptic message in a sign above urinals in bars. After all, those places are age-gated in that those who are not of legal age would not be able to see the marketing material.

Tweed did that, for example. It still had no celebrity endorsements or text that suggested that its products would enhance a lifestyle. Instead it used banal phrases, such as "Is Tweed a code name?"

That advertising is now officially banned.

Alcohol manufacturers, however, are able to advertise on television as long as the marketer abides by Canadian Radio-television and Telecommunications Commission rules. Alcohol advertising can also be on signs that are visible to youth, as long as youth are not shown drinking and the people in the signs are not intoxicated, among other restrictions.

Industry observer and Dentons LLP partner Shea Coulson said on LinkedIn, in response to this BIV article, that "this will keep the legal industry hobbled. If there is no where and no way to promote legal cannabis, the black market will thrive for years to come."