Britannia development could include 1,000 homes 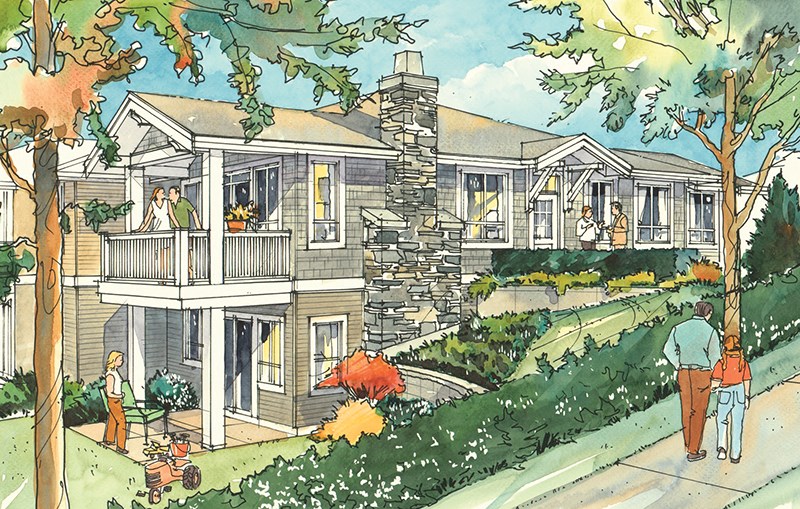 “Slope adaptive housing” would be built throughout the steeper areas of the Britannia Crossing site.Illustration by Cal Srigley

A major development that is proposed for vacant land near Britannia Beach is being scaled back, but could still possibly include around 1,000 homes, a central park, small commercial space, a transit hub and an elementary school.

When Taicheng Development Corporation bought the 460-acre plot of land in 2012, the plan was to build up to 4,000 homes. The new design for South Britannia Beach includes between 850 and 1,000 units, in a mix of houses, townhouses, rowhouses and apartments. To encourage additional density, houses on single-family lots will have the option for secondary suites or laneway housing.

The property, which the Chinese developer bought for $30.5 million in a court-ordered cash sale, includes the gravel pit directly south of Britannia Mine Museum, the former Makin lands and land that stretches to the top of Furry Creek. About 180 acres would be developed.

“There were too many units being proposed before. We want to be sensitive to the site, including the streams and wetland,” said project manager Michael von Hausen, adding Area D’s official community plan allows for 1,000 units of housing in the area.

“We plan to have South Britannia Beach as a satellite community to Squamish. We’ll have a small commercial area with a coffee shop for local residents, and we are considering a shuttle service to Squamish and Vancouver.”

The new proposal is less elaborate than the first plans, which included a grocery store, medical clinic, rec centre, a marina and the possibility of a library, along with 4,000 units of housing.

The aim was to have most daily needs met without driving, but with the option of easy access to Squamish. Car and bike-share programs have been discussed.

Several meetings were held between the Taicheng Development Corporation and the Squamish-Lillooet Regional District, and the developer is expected to submit a revised proposal in December. If approved, construction could start as early as 2017 and is expected to be phased over the next 15 to 20 years.

Britannia Crossing, the community gathering spot, would consist of multi-family housing surrounding a central park, commercial space – including the possibility of a coffee shop, pub and restaurant – plus a transit hub, daycare, business centre and the potential for a school for students in Kindergarten to Grade 3. Three other neighbourhoods, Britannia Meadows, Soundview and Minaty, would be linked to the main area.

“I can see a lot of young families moving here, especially since it’s difficult to buy a house in Vancouver,” said Tony Rainbow, SLRD Area D director. “It’s not a bad commute, and people are working from home more and more now.

“The daycare will help draw young families to the community. There is a lot to offer them here,” said Rainbow.

The proposed elementary school would be phased in over time if there are enough students in the area, according to documents.

Plans also include the creation of Minaty Bay Regional Park on a 12-acre plot south of Highway 99. The majority of the park would be kept in its natural state while also providing an area for waterfront recreation.

“We are looking for infrastructure to go along with the community. This is something the SLRD will be asking more about,” said Rainbow.

A concern of the community, he noted, is traffic along the highway, particularly at Britannia Beach.

“That is something that will need to be addressed,” Rainbow said, adding that, if approved, South Britannia Beach will more than double the population of Area D, which includes North Britannia Beach, Porteau Cove, Furry Creek and several small, rural communities. Public consultation meetings will be held when the development is further along in the application process.