With three CN Rail tracks just metres from their homes, Squamish Nation members living on the Eslhá7an reserve near Mosquito Creek are putting up with unacceptable levels of noise, pollution and health impacts, residents say.
Jul 1, 2020 8:30 AM By: Brent Richter 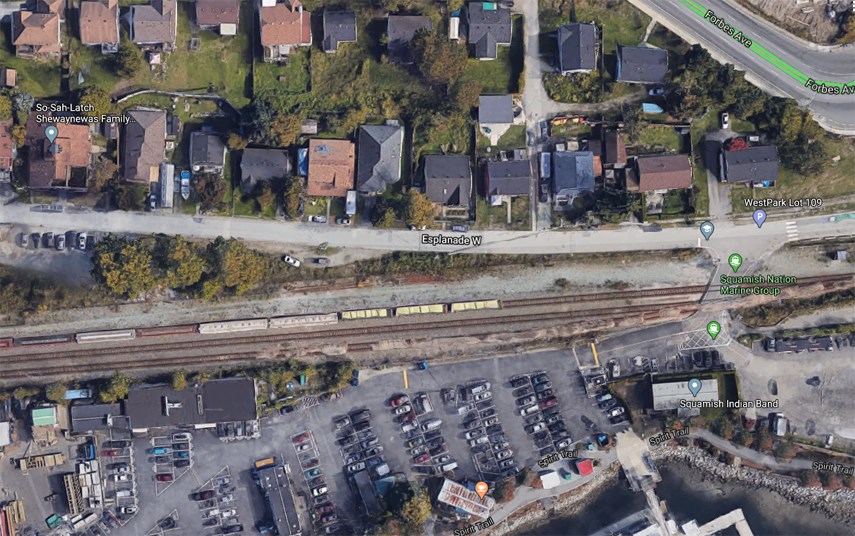 With three CN Rail tracks just metres from their homes, Squamish Nation members living on the Eslhá7an reserve near Mosquito Creek are putting up with unacceptable levels of noise, pollution and health impacts, residents say.

As soon as it enters the reserve at Mosquito Creek Marina, the track splits into three, which necessitates whistles, idling and shunting that causes residents to wake up multiple times through the night.

“The house starts to shake. You’ve got that diesel going everywhere, all the fumes,” said Jerry Johnston, whose home is only about 30 metres from the track. “When it revs up, the windows kind of rattle.”

Sleep interruptions and pollution are known health risks, Shellene Paull noted, and Eslhá7an has the highest concentration of at-risk elders of all of the Squamish Nation’s reserves. Still, Paull said she feels especially bad for the children who live there.

“I can’t imagine how my cousin’s kids have made it through school by being woken up all through the night all their lives,” she said.

Whistling at crossings or when someone is on the tracks is mandated by the federal Canadian Rail Operating Rules for safety reasons, but in the interests of reconciliation, Paull said she would like to see changes made at the federal level.

“I would put the collective well-being and quality of life over a few individual trespassers who think jumping the train tracks is a good shortcut. Maybe CN should just build a sidewalk along there and be good corporate citizens,” Paull said.

The idling and shunting should be moved to more industrial segments of the corridor where it won’t be so harmful, she added.

Canada has a long history of expropriating First Nations land for railways, Paull said, adding that three lanes of rail lines less than 50 metres from homes would never be tolerated in West Vancouver.

“My concern is all the NIMBYs in the world – not in my backyard. Well, if it’s not in your backyard, it’s in our backyard,” she said. “The amount of erosion and alienation of our land base from a racist perspective has been something that we grew up knowing.”

Squamish Nation council spokesman Chris Lewis said the nation has a long history in dealing with the rail line.

“Many of the leadership are born and raised in Eslhá7an so we have first-hand knowledge around the train whistling, idling and general noise in relationship to CN tracks,” he said. “It’s a story that’s been told for decades.”

In 2010, the nation formed a working group made up of staff from the nation, CN, the two neighbouring North Vancouver municipalities and port authority to look at strategies to reduce the noise. In 2013, they began installing automated gates at at-grade crossings, which has reduced the noise and the complaints, Lewis said.

“But we still continue to receive concerns from membership that there is still a lot of engine noise, that engines are idling at high speeds, right in front of their homes late at night, in the middle of the night or early in the morning. So, we still need to do more,” he said. “I did speak to Squamish Nation staff and we’re going to see if we can reconvene that working group that was established in 2010.”

Both Paull and Johnston said they continue to hear trains blow their whistles at night when crossing Bewicke Avenue, which has a protected crossing and shouldn’t require the 100-decibel blast.

In response to the complaints, CN Rail issued a statement saying the whistles are required by law for safety reasons and that idling is necessary for almost half of its fleet of locomotives, which are not designed to be easily turned on and off.

“As a backbone of the Canadian and British Columbian economy, we operate our railroad 24 hours a day, 365 days a year; therefore, there will always be some noise associated with these operations,” the statement read. “CN is aware of the fact that it operates in close proximity to the communities through which we travel and is committed to make every effort to minimize the effects that may occur as a result of these operations.”