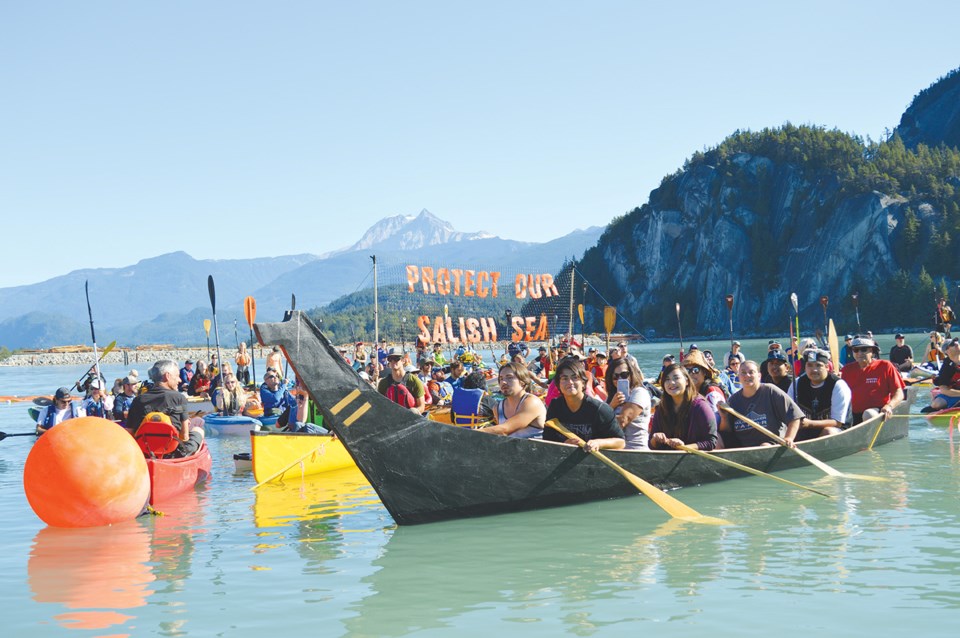 What is the role of corporations in local activism?  Questions have been raised about corporate influence on grassroots campaigns, after it was found apparel company Patagonia was one of the supporters of  My Sea to Sky’s protest in Howe Sound in August. Activists railed against industrial development at the event.

Jennifer Siddon,  spokesperson for Woodfibre LNG  – one of the companies whose activities were being protested – told The Chief via email that she thought the protest “was a clever marketing campaign by a U.S. Retailer.”

In response, Liz Johnson, store manager at Patagonia Vancouver, told The Chief  that they decided to “support My Sea to Sky because it aligns with Patagonia’s mission to use our businesses to implement solutions to the environmental crisis.”

According to Johnson, Patagonia gives one per cent of its sales to support environmental organizations for two reasons:  the belief that environmental crisis requires attention and that “the wild and open spaces where we play” need to be protected.

Tracey Saxby, My Sea to Sky’s executive director, said the organization chose their partners carefully and that “a lot of our values align with Patagonia’s.”

She also said that they are extremely proud to partner with Patagonia.

Beyond helping host the launch of My Sea to Sky’s new campaign, Patagonia Vancouver has allowed the organization to do outreach at the store and gave them a grant for US$8,000 in 2015, said Saxby.

The grant helped to cover the cost of organizing against Woodfibre LNG, she went on to say. My Sea to Sky has applied for another grant from Patagonia but will not know if the application is successful until January, according to Saxby.

Each year, Patagonia funds hundred of groups around the world with grants averaging between US$7,000 to $12,000.

David Hardisty, assistant professor of marketing and behavioural science at UBC, said that it is important to view Patagonia’s support of My Sea to Sky in the context of its status as “Benefit Corporation,” or B-Corp.

B-Corps are basically an alternative businesses structure, which aims to make firms accountable for not only increased profit margins, but also for the well-being of the environment and the community, explained Hardisty.

When Patagonia became a Benefit Corporation and institutionalized its one percent giving policy into the companies governance structure, it prioritized giving to smaller grassroots organizations, according to Patagonia’s website.

For My Sea to Sky, Patagonia’s donations are one of the only sources of funding they have been able to access, said Saxby, who added that because of this My Sea to Sky depends on volunteers. So far in 2017, volunteers have clocked more than 4,100 hours, according to Saxby.

Nowadays, consumers are active about the causes they care about and companies want to appeal to these desires, said Kirstin Appelt, adjunct professor, for marketing and behavioural science at UBC.  Sometimes, those not labeled as B-Corps are just taking a stand as a marketing strategy, something that has come to be known as  “green washing,” Appelt said.

In the case of Patagonia, she said that multiple factors are at play.

“I think they are doing it [supporting My Sea to Sky] because they think it’s the right thing, they also know that it is in line with their marketing and messaging and consumers will like it.”

When asked if companies like Patagonia blur the line between environmental groups and corporations, Appelt said that she thinks there is a place for both.

She also said that currently there is more of a joining forces than we have seen in the past, therefore we can now see groups like Patagonia joining in with activist organizations.

In some ways, corporations are better suited to reach consumers and “have a much more influential role than the smaller advocacy organizations,”  she added.