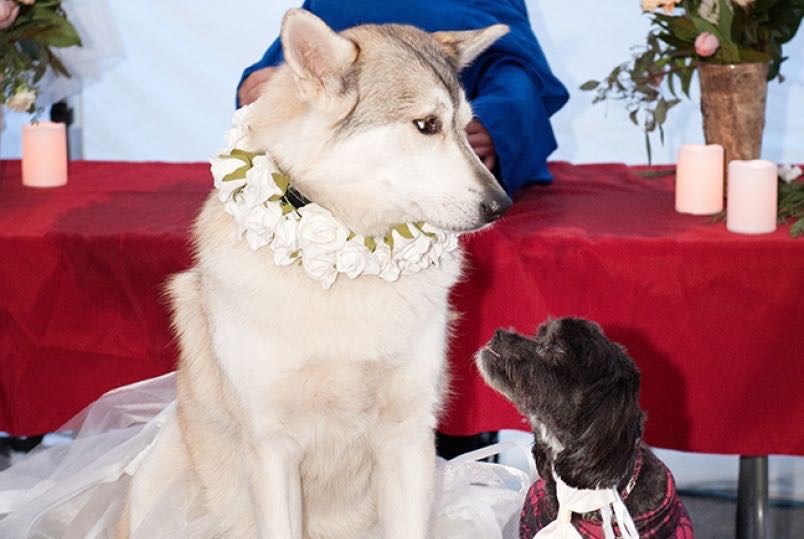 Kaoru (left) at the wedding fundraiser held for Canine Valley rehabilitation centre in February. The dog was accidentally shot and killed by a hunter on Monday morning.

A routine Squamish walk in the woods turned tragic Monday morning when a dog was accidently shot and killed by a hunter near Lake Lucille.

Valley Calderoni, founder of Canine Valley rehabilitation centre, was walking her dog, Kaoru, and nine other dogs from the centre, she said, when the dog was shot.

“I watched her get shot,” said Calderoni, of Kaoru, who was a Tamaskan.

The lone hunter shot the dog from about 20 feet away, according to Calderoni, who was distraught about the incident when speaking with The Chief shortly after it occurred.

The dog stumbled for a few steps before she collapsed, Calderoni said.

“We were all in shock, including Kaoru,” added Canine Valley dog handler Markie Blackburn who was also at the scene.

The women speculated that the hunter must have thought the large yellow dog was a wolf.

Squamish RCMP confirmed that there is a police file on the incident, but a spokesperson told The Chief the B.C. Conservation Officer Service is investigating the incident.

Conservation officer Kent Popjes said the investigation is in the initial stages and that everyone is co-operating fully.

Popjes said that a similar incident occurred about three years ago up the Ashlu when a black Labrador from Whistler was accidentally shot by a hunter.

He said the tragic incident Monday highlights the importance of hunters fully identifying their targets.

He added that ideally dog owners should put something bright on their pet so they are easily identified.

The Squamish hunter did not immediately return a call from The Chief.

Canine Valley staff exercise the dogs often and without incident in the same area, Calderoni said.

The group was just coming out of the forest line on Crown land when the incident occurred, she said.

Some of the dogs were off leash.

“It was very in plain sight,” said Blackburn. “It was really shocking.”
Kaoru was a certified emotional therapy dog.

“She was a community member,” said Carl Merac, who also works at Canine Valley.

“She was a service dog.”

She worked with children with autism and people with emotional challenges, Merac added.

Kaoru was featured in a story in The Chief in February when she was the bride in a doggy wedding — a fundraiser for children’s programs at the centre.

Canine Valley is a rehabilitation centre so the other dogs present when Kaoru was shot were already nervous animals, Blackburn said.

“These are dogs we get paid to work with because a lot of them have issues with people,” she said, her voice breaking with emotion.  “Now we have to deal with the post traumatic stress of the dogs and the people."

The women said they came forward because they want the tragedy to mean something. They hope the incident makes hunters aware of recreational users, including tourists, hikers and dog walkers in the area.