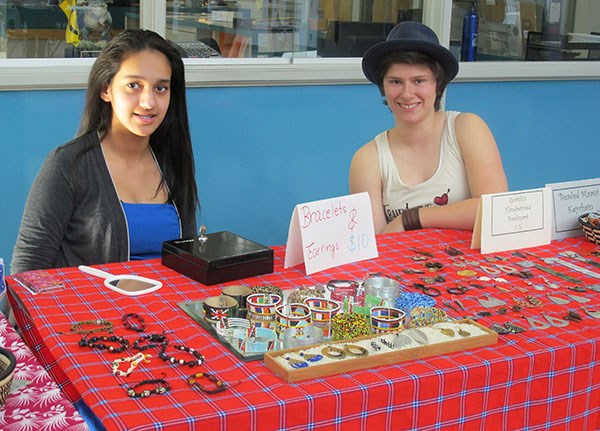 Students and educators last week raised $2,240 to help girls in Kenya further their schooling. Perhaps just as importantly, they helped shed light on the problems girls face in Kenya and elsewhere when it comes to pursuing their dreams.

Every year, the event — organized this year by the Howe Sound Interact Club and the KTF — aims to shed light on an issue facing those in the developing world. This year the theme was education for girls in countries where, for cultural or religious reasons, it’s considered less important for girls to get an education than it is for boys.

Grade 12 student Emily Wiesenthal, who worked with classmate McKenzie Dougherty as lead organizers for the dinner, said it was a topic near and dear to their hearts.

“McKenzie and I were driven by the goal of awareness,” Wiesenthal said. “We both have a passion for education, particularly for girls. I’m going into gender studies at UVic and I want to go into the field of promoting gender equality in education.”

Speakers at last week’s event included Ji Ai Cho, the HSSS vice-principal and member of an international group called Education Beyond Borders, and Ashley Bouchard, a North Vancouver-based board member of the Vancouver chapter of Room to Read, which builds libraries and schools and provides scholarships to those in need in Asia and Africa.

In 2010, 2011 and 2012, Cho travelled to Kenya, where the school system is funded only up to Grade 8. After that, students pay tuition, and the culture in Kenya places greater importance on boys’ education than it doesn’t on schooling for girls, Cho said.

“For many kids it’s not a reality for them to go to school,” she said. “Many are from rural areas and have to pay if they want to continue.”

Traditionally in Kenya, many girls are encouraged to marry in their early teens and even when they don’t marry, they’re expected to help take care of the household from a young age, while boys further their education in pursuit of careers, Cho said. As a consequence, any money that parents have for school tuition is normally spent on their sons, she said.

At last week’s dinner, trinkets that Cho purchased on her most recent travels to Kenya were sold. As well, there was a silent auction, and of the $20-per-person fee, half went to pay for the dinner and half went into the KTF.

In addition to the money raised last week, students also sell lunches throughout the school year. Cho said it looks like the KTF, which is in its third year, will have raised about $7,000 by the end of the academic year.

The money goes to a local conservation group in the community of Nanyuki. Wiesenthal said the HSSS students involved look forward to the chance to connect with girls who are directly affected by their work on Skype.

“We also get to see a direct impact from what we’re doing,” she said. “We get to see kids who are happy to be in school. One of the things we all have in common is everyone loves Beyoncé.”

Bouchard, whose group is currently working to build a school in Nepal, among its many other initiatives, said she found it gratifying to see the level of interest exhibited at HSSS.

“It was really great,” she said. “A lot of interest was sparked by it, I think, which is a big part of it for me — to see how the students are getting involved.”