Gondola cable seems to have been cut, say Squamish RCMP

"At this time, we believe the cables were cut and there's a deliberate act of vandalism," Insp. Kara Triance of the Sea to Sky RCMP said at a press conference at the Squamish detachment on Aug. 10. When asked if seemingly new graffiti at the scene was connected, Triance said they noticed it but it is not included in the investigation.

"Until such time as a cause has been definitively identified, police are treating this as criminal in nature, and have not ruled out that this is a deliberate act," Squamish RCMP Const. Ashley MacKay said at the conference. "We recognize the potential of what could have been and are thankful that no one was injured. We are currently assessing the damage, which will help us identify the cause of the incident."

The RCMP asks anyone with information to come forward, especially if they were in the gondola or Stawamus Chief area between 4 a.m. and 9 a.m. on Aug. 10.

"This includes hikers, climbers and campers who may have been in the area of the gondola or the Chief. Please remember that no detail is too small," MacKay said.

Triance would not disclose if video surveillance was available.

The area has been closed and RCMP have been on scene at the gondola since around 8:45 a.m. to determine the cause of the incident. Triance said the trails in the area may have been used to access the gondola line, and hikers are asked to avoid the area, including the Sea to Summit Trail and Shannon Falls Connector Trail. Police don't believe there is anyone in the backcountry area, accessed by the gondola, who need assistance getting out.

"We're talking about a very large geographical area for all of our police officers to cover. So at this time, any co-operation we can get from the public to clear from that area would be helpful," Triance said.

The inspector said it is too early to discuss suspects.

"The entire Sea to Sky Gondola has been affected," Triance said. "There are 31 gondola cars. Approximately half of them are on the ground."

The gondola's general manager Kirby Brown told The Chief that between 4 and 5 a.m. Saturday morning, the overnight security workers heard a loud noise, then found the gondola was de-roped — the cable and several cabins were down on the ground, with several cabins at the top still suspended between the top four or five towers. Brown said they expect the cabins are heavily damaged.

"Certainly, early indications are that there was no environmental or maintenance mechanism that could have caused it. It points toward a conclusion that somebody interfered with the lift," he said.

"All our efforts are focused on understanding how this happened and mobilizing our team to make sure that we investigate properly with all the appropriate authorities," Brown said.

The RCMP is working with the Sea to Sky Gondola as well as Work Safe BC and Technical Safety BC, and MacKay said they are walking the gondola line.

Dopplemayr, a company that specializes in cables, ropes and lifts, is on the way to do repairs, Brown said. 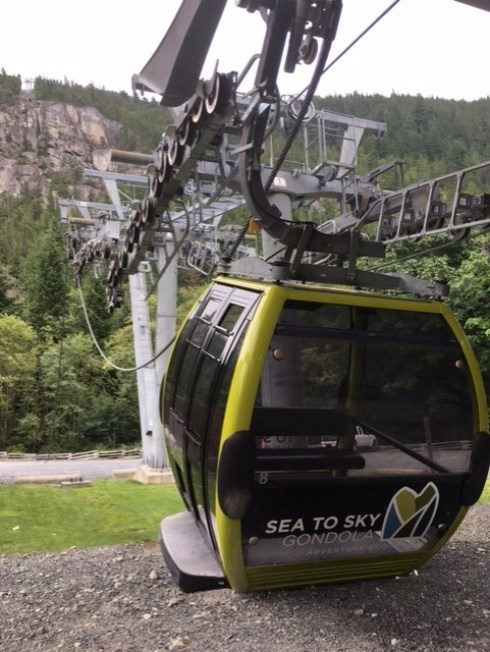 Reached on Sunday, Squamish Mayor Karen Elliott expressed shock at the incident and support for the work of the RCMP.

“First and foremost we are incredibly thankful that no-one was injured. We are a close-knit community and I know I speak for many residents when I say that we are truly saddened by this event,” she said in an email to The Chief.

“Squamish has embraced and celebrated the Sea to Sky Gondola and all its positive impacts on the community. While it's very difficult to comprehend the idea that this may have been done deliberately, we're confident in the comprehensive investigative  work of the Squamish RCMP, and are being kept apprised of the situation.”

Elliott added that Squamish continues to welcome visitors from around the world.

She had a special message for the Sea to Sky Gondola employees.

“Our immediate thoughts go out to the entire team at the Sea to Sky Gondola as they respond to this reality. We understand the gondola is in the process of determining their timeline to get up and running and will be developing a plan for their staff. We have full confidence in the gondola team and will support them in any way we can as their plans become more clear. We know our community will step up where and when it needs to.”In response to the incident, Whistler Blackcomb released a statement to confirm all of its gondolas and lifts have been checked.

"A pre-operational inspection is always conducted before the lines open each morning, and this procedure was conducted today, per normal practice. Guest safety is a top priority for Whistler Blackcomb and it will continue to be vigilant in upholding its standards and practices," spokesperson Jennifer Smith wrote in an email.

She noted Whistler Blackcomb is not affiliated with the Sea to Sky Gondola.

There is currently no estimated timeframe for repairs or when the Sea to Sky Gondola will reopen.

*This story has been updated as new information was released.