Improving the lives of aboriginal people

Reconciliation celebration to be held Monday in Squamish
Feb 24, 2016 6:00 AM By: Michaela Garstin 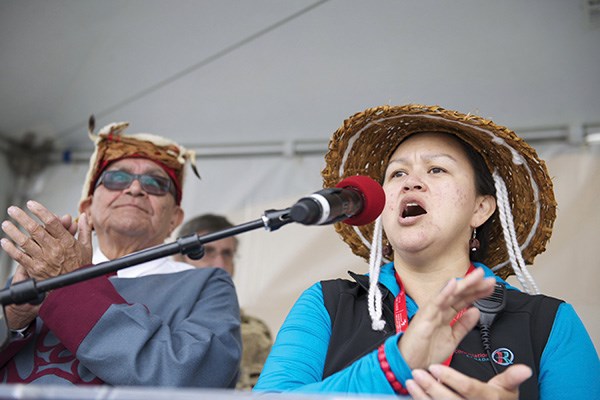 Shelley Joseph, public outreach lead and cultural advisor for Reconciliation Canada, will be speaking at an event in Squamish on Monday.Submitted

The Squamish Nation is holding an event to raise awareness on the history of local aboriginal people, including the negative effects of residential schools, which sought to assimilate indigenous children into mainstream Canadian culture by separating them from their families.

In partnership with the Squamish Public Library, the evening event focuses on the Truth and Reconciliation Commission of Canada’s final report that outlines the relationship between aboriginal people and other Canadians in the process of reconciliation.

An Evening Celebrating Reconciliation takes place on Monday (Feb. 29) from 6 to 8 p.m. at the Eagle Eye Theatre with speakers from Reconciliation Canada and the Squamish Nation, as well as elders who went to residential schools.

“We hope people will understand that we have a shared history, not individual histories,” said Shelley Joseph, public outreach lead and cultural advisor for Reconciliation Canada. She will be speaking at the event about how aboriginal and non-aboriginal people can work together to reconcile the past and build a better future.

Released in December, Canada’s Truth and Reconciliation Committee’s final report contains historical details and firsthand accounts of what happened in residential schools, as well as 10 guiding principles and 94 recommendations that all Canadians can take towards improving the lives of aboriginal people.

In 1883, the Canadian government built the first three large residential schools in Western Canada. The system, which was administered by the Roman Catholic, Anglican, United, Methodist and Presbyterian churches, grew until there were 80 schools across the country. St. Paul’s Indian Residential School, which was located in North Vancouver where St. Thomas High School is located today, was in operation from 1899 to 1958.

The last school closed in the late-1990s and, in 2008, Prime Minister Stephen Harper, on behalf of all Canadians, apologized to the survivors.

“They didn’t know how to be a father and a mother to us. They didn’t know love, encouragement and support. It was a massive struggle,” said Joseph, who was determined to change the effects of the residential school system for her own three children. For many families, however, the effects still linger.

“The effects are alcohol, addiction, no self-esteem. The [high school] dropout rate is much more than it should be.”

Since the early 1990s, the Squamish Nation chiefs and council, and members who went to residential schools, have been involved with the Truth and Reconciliation Commission process by sharing their stories and making recommendations at gatherings throughout B.C.

“TRC’s work, we see this as a stepping stone to the work that each community needs to share with the schools, with organizations, with our own people – children, grandchildren and great-grandchildren –  so we can share and learn from what our people can and must do in order to heal,” said Christine Baker, (TlatlaKwot), manager of Squamish Valley Operations for Ayas Men Men Child/Family & Yúustway Health Services.

The final report, which is available to view online and at the Squamish Public Library, also delves into Canada’s involvement with treaties and aboriginal governments and rights.

“Learning about our nation’s history can empower us to make better decisions as we move forward, and, as research has shown, reading makes us more empathetic to the experiences of others. Thus, learning is an integral part of the healing and reconciliation process,” said Chelsea Jordan-Makely, public services librarian. “We hope that individuals will approach these materials with an open mind and a willingness to learn… and reflect on their experiences, as individuals and as members of the community, overall.”