Is Squamish’s carbon capture technology the solution to climate change?

Experts debate the merits of Carbon Engineering’s project
Apr 5, 2019 7:00 AM By: Steven Chua 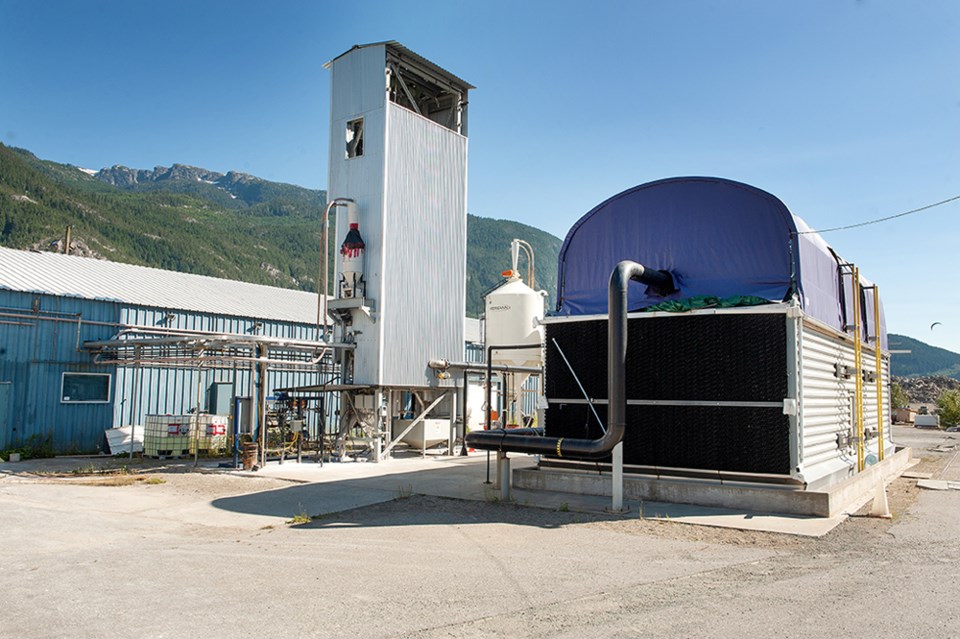 As Carbon Engineering garners worldwide recognition and millions of dollars of investment, one organization is critical of whether the technology will be the climate game-changer it has been heralded to be.

Squamish company Carbon Engineering has two types of plants that suck carbon from the air. One processes it so it can be buried in the ground. The other processes the carbon to be reused for a variety of purposes such as fuel or enhanced oil recovery.

However, there are worries from an environmental group that, should Carbon Engineering go down the path of reusing the carbon for fuel or oil recovery, it could be, at best, a questionable fix.

“I absolutely consider this project a false solution,” said Carroll Muffett, the president of the Center for International Environmental Law, or CIEL.

“The math on this simply doesn’t add up.”

How clean is the technology?

Muffett said the technology requires a large amount of energy to power and also emits its own greenhouse gas emissions.

A chemical engineering professor, at The Chief’s request, looked at a Carbon Engineering study published in 2018 to see if that was the case.

“The use of natural gas to power the Carbon Engineering process will in itself produce CO2. Carbon Engineering claim[s] that to capture one ton of CO2 they only need to produce 0.3 to 0.5 ton[s] of CO2 from burning natural gas,” wrote Colin Scholes, a professor at the University of Melbourne, in an email.

“Generally, the lower the concentration of CO2, the more energy is required to capture the CO2. This is why most carbon capture engineering efforts are not focused on direct air capture — as separating 400 parts per million of CO2 from air is a lot harder than separation 15 [per cent] CO2 from the flue gas of an industrial plant.”

Carbon Engineering, however, maintains that its operations are clean and disagrees with the statements from Muffett and Scholes.

“Any CO2 emissions from our facility are captured in our facility,” said Steve Oldham, CEO of the Carbon Engineering.

“All the energy we use — what we use, renewable electricity — is clean. Now, in certain areas it may make more sense to use natural gas where natural gas is highly abundant. And in that case, again, we capture all the natural gas — no emissions.”

Oldham also said there was merit to removing carbon from industrial plant flue, but added that it wasn’t enough to address the vast amount of carbon already in the atmosphere.

He added even if no other emissions were put in the air as a result of industrial filtering or other green technology, there’d still be a climate change problem.

As a result, it’s necessary to suck carbon from the air, Oldham said.

What powers the facilities?

He said that even if the technology is powered using green sources, that green energy could be better spent powering technology — such as electric cars — that ensures no emissions are put into the atmosphere to begin with.

On the other hand, Oldham said that Carbon Engineering’s operations are driven by clean energy that was never in the grid. That means the clean energy being used by the company is not being diverted from other residents, businesses or facilities being used by a community.

Instead, the company builds its own clean energy generation facilities from scratch.

“[We] use renewable energy that otherwise wouldn’t exist,” Oldham said.

Does using carbon for enhanced oil recovery hurt the environment?

Carbon Engineering, according to Muffett, is also based on a business model of capturing carbon for possible reuse as diesel or jet fuel or for enhanced oil recovery.

This, he said, makes him question what gains can be made for the environment.

“The chance that it will do anything to benefit the climate as opposed to benefit fossil fuel interests becomes exceedingly small,” Muffett said.

“In all likelihood, however, the real use of this technology is it allows [fossil fuel interests] to say that, ‘We’re doing something about climate change,’ when, in fact, it’s unlikely to do anything.”

Some of the companies that have invested in Carbon Engineering, such as Chevron, BHP and Occidental, have fossil fuel interests.

Muffett also noted that Occidental, a recent investor in Carbon Engineering, is interested in using the technology for enhanced oil recovery.

Should that be the case, this could further decrease any possible environmental gains, he said.

Enhanced oil recovery is the process of injecting pressurized CO2 and water into a depleted oil well, which forces remaining oil to the surface for extraction.

“If you spend all that energy to capture the CO2, and then you turn around and you use it to produce more oil or you burn it as fuel there’s not really a net [environmental] gain,” Muffett said.

Oldham, however, responded by saying any fuel burned would’ve already been in the atmosphere to begin with, creating a net zero effect.

He also said in the case of enhanced oil recovery, there’s a way to do it that could be beneficial to the environment.

“And that’s what we are working on. That’s exactly what we plan to do. So, yes, you would’ve produced more crude, but you would will have buried more carbon underground in the process than is contained in the crude that comes out.”

Oldham said this isn’t just theoretical — the technology is at a state where this can be done.

In a Center for International Environmental Law report co-authored by Muffett, the organization says that Carbon Engineering “overstated” its greenhouse-gas reducing effects.

Carbon Engineering says in a year, each air capture facility can remove one million tons of CO2, which they say is the equivalent to the annual emissions of 250,000 passenger cars.

However, CIEL says that under the US Environmental Protection Agency’s measurements of car emissions, which is 4.6 metric tons a year per vehicle, Carbon Engineering’s estimate should actually drop down to removing 217,000 car-equivalents.

At the same time, according to CIEL, the facility would produce 320,000 litres of synthetic fuel a day.

Assuming this fuel is used, this would amount to 313 million kilograms of emissions per year, equivalent to the emissions of 68,000 average passenger vehicles, according to CIEL estimates.

“The climate benefits would be lower still, and likely negative, if the captured carbon were used to produce jet fuels rather than synthetic diesel,” the organization’s report reads.

Oldham, however, replied the idea of car equivalents can be subjective because there are different types of vehicles.

He also added that the statistics were being misinterpreted.

“They are utterly missing the point that the CO2 emitted was in the atmosphere yesterday,” said Oldham. “And we took it out. We created a hole, and then, when you drive the car, you refill the hole.”

He said that there have been major breakthroughs in electric transportation. For example, Reuters reported last year that some experts believe Norway could have its first electric passenger plane flights by 2025.

Investing in carbon capture further entrenches fossil fuel technologies, which makes it harder to shift to cleaner energy, he said.

“The critical question to ask anyone who is proposing and pushing these technologies, is, ‘How does your technology actually work in a world that is fully decarbonized?” said Muffett. “Where does it go? How is it economic?’”

However, Oldham said that, if, for example, all people were given electric vehicles overnight, there’d still be a huge amount of harmful CO2 in the atmosphere that needs to be removed, which he called “the 95 per cent” still in the air.

“If you eliminate all emissions overnight, it’s still not enough to prevent climate change, because of the 95 per cent that’s already there,” he said.

Some climate scientists have said that carbon dioxide emissions can linger for millenia, according to Nature.com, the website for one of the world’s most highly-regarded scientific journals.

This is where carbon capture would come in, Oldham said.

“There’s a very efficient way to do that — by growing trees,” he said.

This is cheaper than direct air capture technology and can be done right now, he said.

However, it seems as if replanting vegetation might not be the magic fix this problem, according to the chemical engineering professor at the University of Melbourne.

“Planting trees for direct air capture is difficult because of the large scale of plants needed and lack of available land in which to plant them,” wrote Scholes in an email.

“It has been estimated that the average Australian needs to plant three eucalyptus trees a year for the rest of their life to cover their emissions, which works out to be 74 million trees planted per year.”

A Simon Fraser University professor specializing in resource and environmental management said a combination of both planting more vegetation, as well as carbon capture technology is needed.

“It is misguided to argue that we stop pursuing one of them now,” wrote Mark Jaccard in an email.

“The market and various regulations will decide if one approach will dominate, but it is obvious to people who look at our continued failure on GHGs that humanity needs to rapidly deploy both of these and many other strategies.”

Oldham said that one of Carbon Engineering’s facilities does the work of 40 million trees each year.

“How long do you think it’s going to take to plant 40 million trees?” he said.

Oldham said it’s necessary to plant trees, but the land use requirements as well as the time it would take for them to grow would be substantial.

Muffett emphasized, however, there is no silver bullet for fighting climate change.

This is one case in where he seems to have at least a partial agreement with Oldham, who said, “We recognize that these technologies are not silver bullets; many solutions will be necessary to address the climate and energy challenge, and our technologies provide two globally-scalable tools to add to our climate toolkit.”