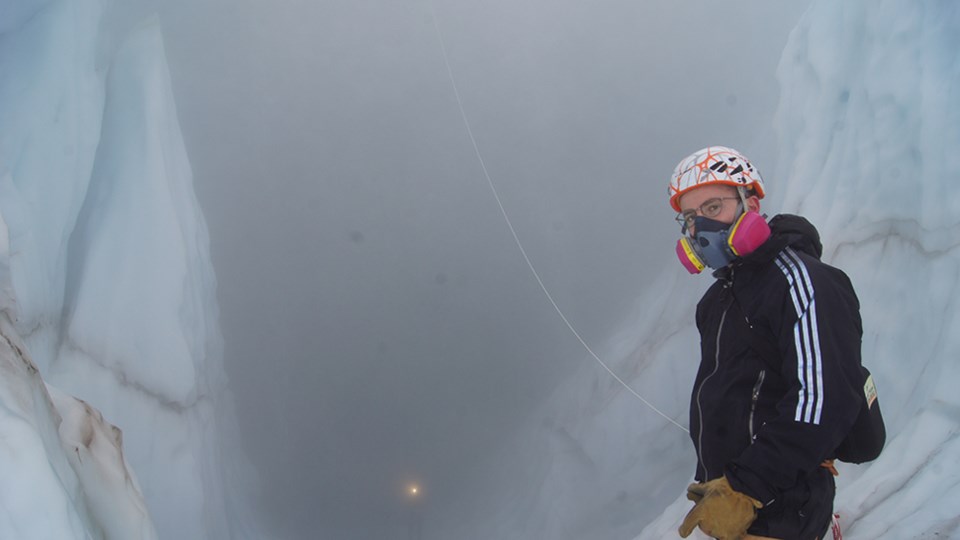 Four campers and their dog arrived at upper Lillooet forest campsite at 3:25 a.m. on Aug. 6, 2010 and began unloading their gear.

"They were surprised by 'two large cracks' occurring in quick succession, followed by a rumbling that initially sounded like a train or a forest fire, but that grew to a deafening volume in about 20 seconds," recounts researcher Mason Pitchel.

He is quoting from a report by Pierre Friele that includes this eye witness account from P. Smith who survived the 2010 Mount Meager landslide.

A fourth-year Quest University student, Pitchel takes pains to say the work he is doing on Mount Meager is a research project and the facts he shares are not meant to alarm.

But, it is hard not to take seriously the sombre information he provides in his presentation, which begins with the story of the campers.

"The most alarming part of their story occurred as they came face-to-face with a 1.5-metre high wall of mud and water," says Pitchel during his Quest Summer Fellowship Program presentation.

He spent the summer on the project, under the tutelage of Steve Quane, a local volcanologist, and a Quest professor.

The talk, which is called Landslide Monitoring at the Mount Meager Volcanic Complex, was given at the Squamish library and recently at Zephyr Café.

He also spoke with The Chief at length about this project.

Luckily, there were no deaths in the 2010 landslide on the rocky slopes above Capricorn Creek at the Mount Meager Volcanic Complex that brought down 49 million cubic meters of debris and caused $10 million in damage.

But Pitchel's project focus isn't on what happened before, but what could happen again. He and a team of collaborators are installing a monitoring system at the Mount Meager Volcanic Complex that consists of a geophone, infrasound system, weather station and camera.

Transmitter, repeater and receiver stations will be placed in a triangular formation around the slope.

"Data will be collected at the transmitter station, then bounced via radio frequency to the repeater, then bounced to the receiver located at the inlet. Then it will be transported via fibre optic cable from the inlet to the bunkhouse, where there is high-speed wifi," PItchel explained.

"In short, the project is to look, listen, and feel what the mountain is doing, then attempt to analyze the data."

The camera, for example, will confirm the weather if an event occurs. "If we pick up a signal, we can then look through the images taken by the camera and hopefully see a visible difference," he said.

"Landslides in this area have been anecdotally linked to warm temperatures and large rainfall events, things that will add a lot of water to a system. We hope to be able to solidify those anecdotes into something more concrete," he said.

Locations for the instruments have been picked and now the team will wait out the winter with the goal to install it in the late spring.

While Mount Meager is an active volcano, that isn't what the researchers are most concerned about.

"A variety of compounding factors make the region incredibly prone to landslides, like the one from 2010," he said.

"You have a combination of loosely consolidated volcanic rock, a wet climate, significant freeze-thaw cycles, and volcanic seismicity that all contribute to the land sliding in the area."

Former SFU student Gio Roberti published his PhD on this slope, and it is to his work that Pitchel points to.

"If we assume that the entire slope has the potential to slide, it could be up to 10 times larger than the slide in 2010," which was one of the largest in Canadian history.

"We are looking at the potential for a really big landslide," he said.

Roberti used imagery to track the movement of the slope over time, and it showed that the slope is moving at rates up to 35 millimetres per month during freeze-thaw cycles.

Despite the risk to people's structures and livelihoods in the area, not much has been done to manage it, Pitcher said.

Pitchel said he was surprised to see that such projects had not already been carried out in the area.

"Canada is kind of behind in terms of hazard monitoring compared to the U.S. or other countries," he told The Chief

"This is one of the first installations on an active volcano. It was a bit surprising that this work hadn't been done already. There is no pointing fingers, I think it comes down to funding and having to prioritize other things, but I think we are starting to see a movement toward taking these things seriously and putting some time, effort and money into monitoring our environment."

Who is paying for what with the project

Innergex, which has two power stations in the area, has commissioned the landslide alarm system from Weir-Jones Engineering, who has given Pitchel funding, mentorship and support for the project.

SFU professor and co-director Centre for Natural Hazards Research Glyn Williams-Jones oversees the project and Nu Point Solutions donated some equipment. The project also got a grant from the Squamish Lillooet Regional District, the Lil'wat Nation, and the Village of Pemberton.

"It has been cool because it is a really collaborative project between a number of organizations so I think it has set up a lot of great relationships," Pitchel said.

Innergex owns the information collected from the project and the data can be used as research by the university, Pitchel said, and the goal of everyone involved is to raise awareness of the hazard.

Pitchel will be leaving this project behind when he graduates next semester, but he hopes to perhaps do his masters on monitoring efforts in the Sea to Sky.

"Once stuff is installed it has created infrastructure that is going to be continuing gathering data so I think it has created opportunities for a lot more projects like this one," he said. "And maybe some projects to do some more technical science on the data for Quest students."

**Please note, this story has been corrected and updated since it was first posted. We corrected that the 2010 slide caused 49 million cubic meters of debris not 483.