District camping and vanlife ban a near certainty after three readings of bylaw passed by council
Jul 21, 2020 8:40 PM By: Steven Chua 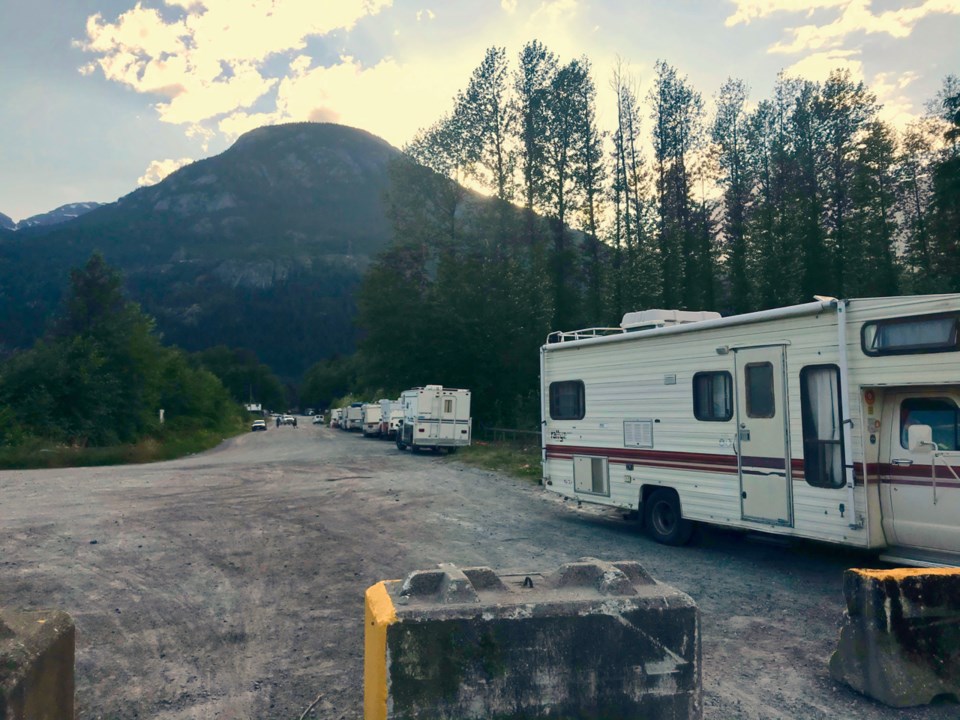 An organizer representing Squamish vehicle residents says she plans on rallying people against a District vanlife and camping ban that will almost certainly be passed by council.

Thomasina Pidgeon of the Vehicle Residents of Squamish advocacy group said the group will be protesting a motion that will effectively end vanlife in within municipal boundaries.

“We’re all pretty upset about it,” she told The Chief. “Squamish is going backward.”

In a divided 4-3 vote on July 21, Squamish council elected to give three readings to a bylaw that would prohibit vanlife or camping everywhere in town, aside from in designated campgrounds.

Mayor Karen Elliott and councillors Doug Race, John French and Eric Andersen were in favour of the ban.

The bylaw is expected to be debated before adoption next week, however, it is extremely rare for bylaws that receive three readings to fail at adoption.

Pidgeon said that while the municipality is using COVID-19 as a justification to enact the ban, this will create a bigger health hazard, as it will funnel people into municipal campgrounds, where they will be more likely to congregate and spread the disease.

She added that the perception that vanlifing is about freeloading is incorrect, as she said she’d happily pay for a permit to live in her vehicle.

The camping ban is a bylaw that has special meaning in Squamish, where a nomadic, free-spirited lifestyle has often been glorified by recreationalists.

At the same time, vanlife offers shelter in a town that wrestles with a zero vacancy rate and an affordable housing crisis. Compounding that are the financial challenges that have arisen for many as a result of COVID-19.

However, many other residents have complained of noise, litter, public defecation and wildfire hazards that they say come with vanlifers.

This is not the first time the District has considered a camping ban. Last year, in a motion that drew headlines across the province, the municipality contemplated prohibiting vanlife within the town’s boundaries.

However, after protesters overflowed council chambers, the municipality instead opted to ban vanlife only in the Estuary and Mamquam River Forest Service Road.

This year, the issue was revisited in the context of a pandemic.

Natasha Golbeck, the town’s general manager of community services, said that the provincial health officer has directed municipalities to clamp down on potential COVID-19 health hazards.

Golbeck said that congregations of vehicle dwellers could be a hazard, especially since the areas where they stay may lack sanitation and hygienic facilities.

During the meeting, the atmosphere was completely different from last year’s debates. In-person appearances are banned due to COVID-19. Instead of a council chamber overflowing with attendees, the municipal livestream displayed less than 20 people quietly watching.

However, that wasn’t to say no opposition was present.

Pidgeon and another vehicle resident were given an audience with council, and brandished an over-300 signature online petition.

Speaking via an internet call, Pidgeon derided the proposed ban, saying that authorities were using COVID-19 as an excuse to shove an unwanted bylaw forward.

“I was hoping that the District of Squamish would do a better job rather than using COVID as an excuse to pass a bylaw. Taking people who rely on public land off during a pandemic is really quite unruly,” said Pidgeon.

She also called the District’s efforts to “herd everyone” into the municipal campground a “form of assimilation.”

She also noted the Vehicle Residents of Squamish advocacy group has put forward possible solutions, such as a permit system and a safe lot pilot program, but did not receive any response from the District.

Another vehicle resident, Steve Smith, said that he disagreed with the District’s assessment that COVID-19 has caused an increase in vanlifers.

By his account, less people were living in their cars due to COVID, and the recent uptick has actually been a result of the regular seasonal increase of tourists.

However, some on council who favoured the ban said it would target only people congregating and posing a hazard for COVID-19 transmission.

Coun. John French said that people who vanlife without drawing complaints from neighbours won’t be at risk from these bylaws.

“[People who] fly under the radar...that’s not who we’re targeting with this,” said Elliott. “It is congregations of people creating a public health risk that need to be asked to move on. And they shouldn’t be asked to move on in the middle of the night by police.”

In areas of the town currently not covered by the camping ban, authorities use a traffic bylaw that prohibits sleeping in vehicles to move vanlifers out of roadways.

This generally results in officers waking people up in the middle of the night and getting them to move along, staff say.

Elliott said this current approach is not humane, and said the camping ban would allow officers to conduct their work during daytime hours, which she considered a more just approach.

However, councillors Armand Hurford and Jenna Stoner said this could already be done without a blanket camping ban — it would involve officers issuing warnings during the day and moving out noncompliant vanlifers at night.

“There’s nothing stopping us from still having that educational piece,” said Hurford. “If we fail in our request for compliance, then there is a harder piece behind it.”

Stoner said that more policy work needs to be done.

“We don’t have a robust enough safety net for those folks that we know who this might be...impacting,” she said.

Golbeck noted the District is putting in programs to make the municipal campground more affordable.

Council unanimously voted in favour of directing her to make the municipal campground as accessible as possible for people in tough financial situations.