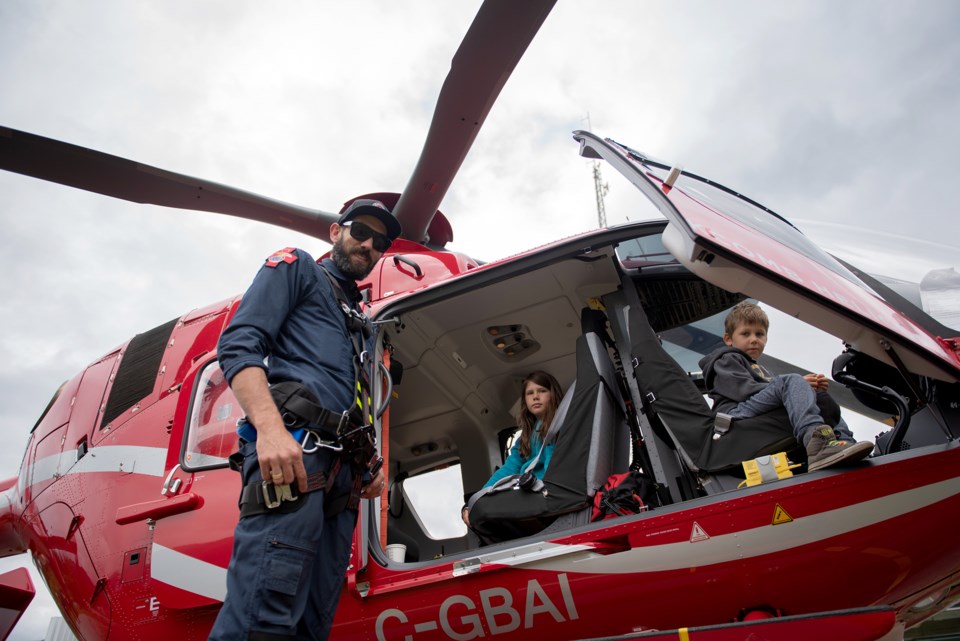 The society is focused on bringing advanced emergency medical care to remote worksites and other hard-to-reach settings in B.C., and it is badly needed, according to president Miles Randell.

“There’s a gap in pre-hospital care delivery in B.C. in remote settings,” he said.

On June 1, the group held a live demonstration at the Squamish Airport, inviting sponsors and members of the community to see TEAAM and Blackcomb Helicopters equipped with hoisting equipment in action.

To illustrate the need for the service, Randell referenced a February 2017 report from the B.C. forest safety ombudsman on emergency helicopters in B.C.

The report includes an example of a logging industry worker injured in Haida Gwaii in 2014. After his leg was crushed by a fallen tree, it took over five hours to transport the man to a hospital in Queen Charlotte.

If an appropriately trained helicopter unit could have responded, the trip would have taken about 20 minutes.

It took another six hours to get him to a hospital in Vancouver, where the man’s leg was amputated below the knee – according the report, “a result that might have been avoided had he been transported to a hospital in a timely manner.”

“In his case, he lost his leg, it cost the healthcare system about a million dollars, and it cost WorkSafe BC about $1.4-million. For all those reasons this is important,” said Randell.

Randell said the team currently has 24 people on board, composed of paramedics, physicians, nurses and rescue specialists.

TEAAM is equipped for a variety of tasks, including providing emergency medical care, transporting patients and extraction and rescue from remote or difficult locations. Normally in B.C., different organizations, when available, must take on each task individually.

“We not only provide the advanced medical care, but we also provide some rescue services. We can cut people out of crushed vehicles or manage people in swiftwater for example,” he said.