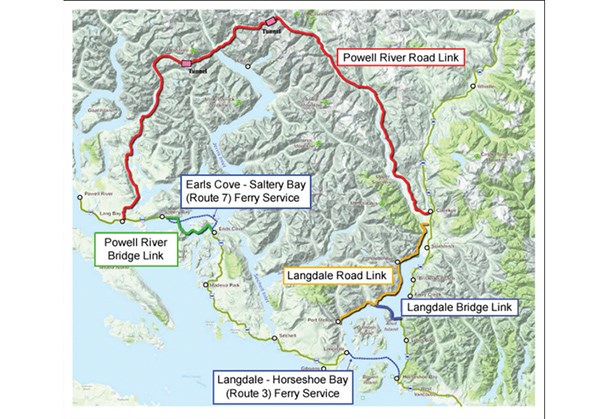 Above are the proposed route options that would link Highway 99 with the Sunshine Coast.Submitted image

It was a busy evening of excitement – and a bit of concern – at a public open house for a fixed-link between the mainland and the Sunshine Coast.

Squamish residents were able to see the details of different road and bridge options at the provincial government-held meeting at the Squamish Valley Golf Club on Oct. 18.

The idea of a fixed-link, which would replace ferry service, has been discussed for decades and now a report is expected to be completed by the end of the year based on the public’s feedback in a series of open houses that will be held in areas on the mainland and the Sunshine Coast, including further south in West Vancouver.

“In Squamish, we have to think about how this will benefit us. Questions about traffic concerns are valid,” said Sea to Sky MLA Jordan Sturdy. “Right now, we’re looking at the routes and factoring this into the final report.”

The least expensive option, the Langdale Road Link, would link Squamish to Port Mellon with a two-lane highway and take around 45 minutes to drive. The cost for the project would be approximately $1.5 to $2-billion.

Another much longer option is the Power River Road Link, a 200-kilometre two-lane highway from Squamish to Powell River that would cost $2.5 to $3-billion, according to the provincial government. It would take two and a half hours to drive and include two tunnels and five bridges over creeks.

A third option, the Langdale Bridge Link, would connect Brunswick Point to a location near Port Mellon on the other side. A 1.5-kilometre suspension bridge would be built from Highway 99 to Anvil Island and connect with a highway along the north side of the island.

Then, another bridge would connect the route to the Sunshine Coast. The total cost would be around $2 to $2.5-billion.

“We’re looking to narrow down the possible route and then we will look at traffic solutions,” said Janelle Erwin, deputy regional director with the Ministry of Transportation, adding that the review is in the initial stages.

It’s too early to discuss the bottleneck of traffic at Britannia Beach, which tends to happen at busy commuting times, until an initial report is complete, she added.

“We’re looking at which options are feasible then we will really start to look at the impacts in Squamish.”

Past studies were completed in 1998 and 2001, she said, and this new report will add to the information.

Discussion with First Nations, whose traditional territories would be impacted by several parts of the proposed routes, is in the very initial stages, and more work needs to be done before any recommendations are made, Erwin said.

“We anticipate a lot of public interest in this project,” she added.

Feedback must be submitted online by Nov. 8 to: fluidsurveys.com/s/sunshine-coast-fixed-link-feasibility-study.