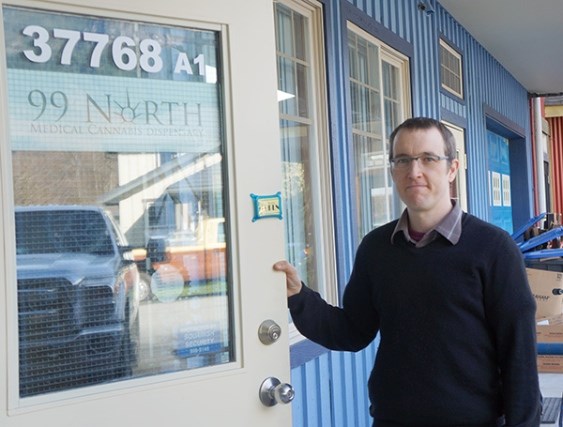 Embattled dispensary owner Bryan Raiser has Member of the Legislative Assembly Jordan Sturdy in his corner in his fight to offer clients medical marijuana at his 99 North Medical Cannabis Dispensary.

Sturdy’s office has been returning emails to Raiser supporters that voice Sturdy’s concern over the inconsistencies in RCMP jurisdictions’ handling of medical marijuana storefront operations.

On Feb. 16, Raiser opened his dispensary in downtown Squamish, where he offered medical marijuana in various forms to clients with a doctor’s prescription or proof of diagnoses of specific conditions.

On March 5 the local RCMP visited to deliver a letter that, according to Raiser, said they intend to take action if he did not close by March 19.

Raiser has since said he is operating only as a resource centre providing information about medical marijuana and how to obtain it.

“MLA Sturdy is committed to helping provide some clarity to the seemingly inconsistent approach of the RCMP in B.C. in enforcing federal laws regarding medical marijuana dispensaries,” read an email from Sturdy’s office forwarded to The Squamish Chief.

“We do need to note that the 60 dispensaries in Vancouver are in the jurisdiction of the Vancouver City Police and they have a policy in place that effectively tolerates the businesses. In speaking with Mayor Heintzman about this issue, [Sturdy] has encouraged council to develop a similar policy to guide policing priorities, although the RCMP are under no obligation to adhere to the guidance.”

Sturdy confirmed with The Squamish Chief that the email originated from his office.

“I mentioned to Bryan on a number of occasions that he should be approaching council to have council have a debate and discuss the idea of providing direction in their [quarterly] meetings with the RCMP as to what they felt their community priorities should be, but the RCMP are under no obligation to adhere to what are essentially suggestions,” Sturdy said, adding that he does understand the reason councils aren’t given control over police decisions.

“Can you imagine if politicians were able to tell the police what they can and can’t investigate? That is fraught with difficulty, obviously,” he said.

Sturdy, the MLA for West Vancouver-Sea to Sky, also acknowledged because the RCMP are under federal jurisdiction, his support doesn’t have any direct or immediate impact on Raiser’s situation.

“It really comes back to the federal government and their determination of how they want to proceed,” he said. “I think every federal party has indicated some desire to amend the way medical marijuana specifically, and in some cases recreational marijuana, how they would plan to manage it. Perhaps it will be an issue this fall.”

The next federal election is scheduled for October.

In March, Squamish council passed a motion stating that council will request that the federal government include marijuana derivatives, such as cannabis oils, in the legal marijuana program, and that government further review legislation and options for greater local access.

John Weston, Conservative Member of Parliament for West Vancouver-Sunshine Coast-Sea to Sky Country, has expressed support for the status quo. Storefront dispensaries are illegal and always have been, he said.

According to a 2014 Angus Reid Global poll, 70 per cent of British Columbian respondents believe the use of marijuana should be legalized.

Raiser said he could not comment for this story, but referred The Squamish Chief to his lawyer, who did not return requests for comment.