Student’s creation could help scientists in their study of pollution and global warming
Sep 28, 2016 8:13 AM By: Jennifer Thuncher 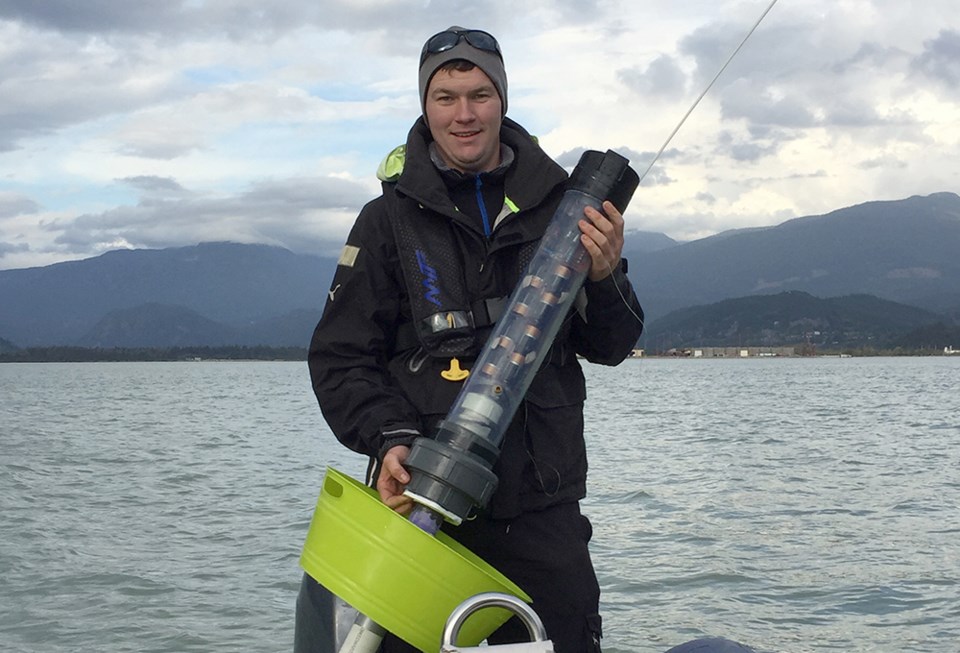 Martin, who is in his fifth year at the university, has created a subsurface current drifter that he has successfully tested in Howe Sound.

“The idea is that it sinks to a certain depth in the water column, say five or 10 metres, and it sits there for a certain amount of time and it tracks the currents at that level,” Martin explained.

This is important because surface water is very influenced by wind and wave movements, so if you try to measure currents in the surface layer of water it isn’t clear what the currents are actually doing.

The devise is programed to sink and then pop back up to register its location by GPS.

“You end up with this GPS map that has these points every 20 minutes of where it has gone,” Martin said.

The idea isn’t new; there are hundreds of similar devices employed in oceans around the world, but what is unique about Martin’s, is his works on a smaller scale and can be used in rivers and lakes. The other difference is Martin’s device keeps itself neutrally buoyant by being actively damped.

“So that the internal density is constantly changing to maintain its location in the water column,” he said, adding others use a slight change in water density to passively dampen the movement of the device.

The information collected – on a Secure Digital (SD) card on board the device – can be used to track pollution and map changes in climate.

“My side of the project is much more focused on creating something I can sink to a certain depth and stay there and the data goes to other people to do interesting things with,” Martin said, with a laugh. “But the applications are climate change and pollution.”

Beyond its computer components, the subsurface current drifter is made from plastic pipe, a piston and two humble Wal-Mart buckets that supply resistance.

The inspiration for using the buckets came from the results of an earlier test without them that failed, Martins said.

“We took it into Alta Lake to test it and immediately it just goes straight to the bottom, gets stuck in the mud and then jumps out of the water,” he recalled, laughing at the memory.  Those who have overseen Martin’s project are impressed. The director of labs at Quest, Court Ashbaugh, said the project “requires a cross-disciplinary approach including computer programming, process control, modern fabrication techniques and data capture.”

Martin’s academic mentor at Quest, professor Rich Wildman, said the project shows how much learning can take place when students follow an idea through from a simple concept to a functioning device.

“He didn’t stop after a basic conceptual understanding; he worked through so many details to make his instrument work,” Wildman said. “Now, we have a new instrument that future students can use to study Howe Sound.”

Martin will graduate from Quest in December, but plans to leave behind the project for other students to pick up and expand on.
The next stage would be to go out and do a series of runs with it in Howe Sound in different locations and try to start to map where different currents go,” he said.

After graduation Martin wants to continue studying mechanical engineering, but first he is going to take some time off.

“To go and work and learn what I don’t know,” he said.