'Very preliminary' results released on geothermal energy potential
May 16, 2020 7:35 AM By: Alyssa Noel 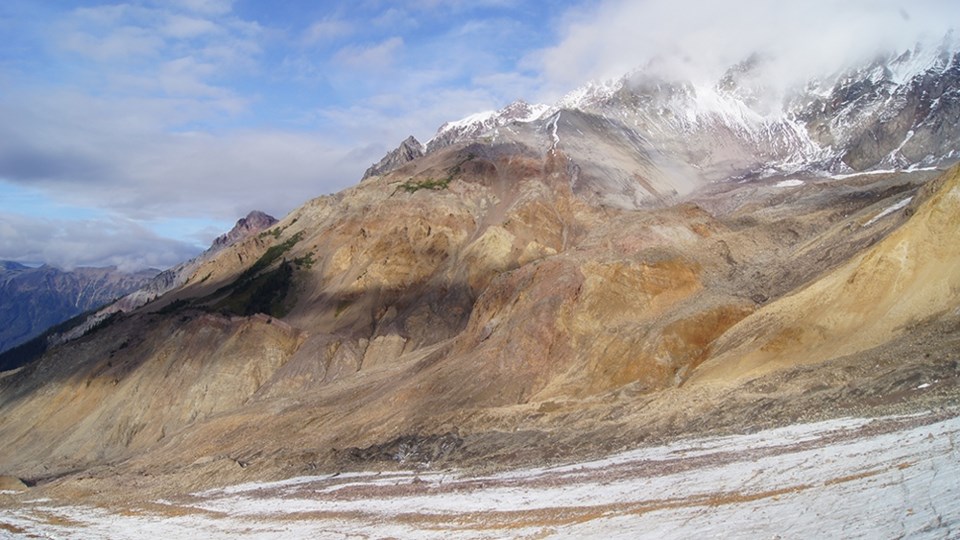 View of slope of concern on Mount Meager.File/Courtesy Mason Pitchel

"If we seem a little bit nervous or maybe a little bit excited—or perhaps a little of both—this afternoon, please bear with us," said Richard Truman, director of external relations at Geoscience BC. "[We] expected maybe 40 people for this open house meeting. We have more than 130 people registered and I see 83 people online already and more people joining every second, so it's really exciting for us."

Before they headed out into the field last summer, Geoscience BC and the Geological Survey of Canada hosted another open house in Pemberton to let residents know about their efforts to determine whether energy from the volcano could be harnessed to generate electricity.

While they haven't fully analyzed the resulting data, the most recent meeting was meant to update the community with an overview of last summer's work.

"To make geothermal work, you need the hot rocks; we need a way to get that heat to surface," said project lead Dr. Stephen Grasby of the Geological Survey of Canada. "And the way that's done is by producing the water from the rocks. You extract the water, you pump it to the surface, you take the heat out to generate electricity, and then generate the water back into the rocks again. So having high temperature isn't enough; you need ... permeability as well. So we decided to ... look at Mount Meager because the limiting aspect of geothermal in many ways is the ability to find these high-permeability rocks at depth."

To that end, the research focused on low-impact, low-cost ways to "image and predict" where permeable zones are that also have high temperature in order to focus exploration and reduce risks of drilling.

"We focused on studying and mapping the rocks around Mount Meager and, using a series of different techniques—passive geophysical methods—to try and see into the mountain," Grasby said. "I mention passive here because geophysics is sometimes associated with what's called active measures where you're doing things like exploding dynamite to try to send shockwaves through the earth and measuring how those respond to the surface. But our focus is on a passive method, so we're just using natural earth sources to understand the rocks in the subsurface."

That included passive seismic, in which researchers left 59 stations on the ground for two months to measure shaking; deep magnetotellurics at 23 sites to measure natural magnetic and electric fields that move through the earth; shallow magnetotellurics at 84 sites to look at the upper two kilometres of the earth for geothermal reservoirs; gravity survey at 79 sites to find minute changes in earth gravity as a result of density differences in rocks and fluids; and geological mapping at 903 sites to study the faults and fractures that can conduct fluid flow.

Researchers also looked at 55 sites for fracture studies and gathered 1,500 measurements to understand "dominant orientations and frequency of fractures that control fluid flow;" looked at hot spring geochemistry by taking samples; and used remote sensing to look at satellite images that might show thermal anomalies.

The resulting models lead to "very preliminary results" that suggest six to 13 megawatt power could be produced from one well for over 30 years.

"This is just the model for a single well," Grasby said. "Then, of course, you can look at multiple wells that would produce the total power. I would just emphasize this is very preliminary results."

The data still has to be analyzed and is expected to be released in 2021. "The one-year delay that we put in here is solely to give the students a chance to have an opportunity to have first use of the data they've collected for their own research for their PhD, Master's projects," said Grasby. "They get one-year proprietary use of that data, but then after that point, it's going to be made completely publicly available online through Geoscience BC and the Geological Survey of Canada."