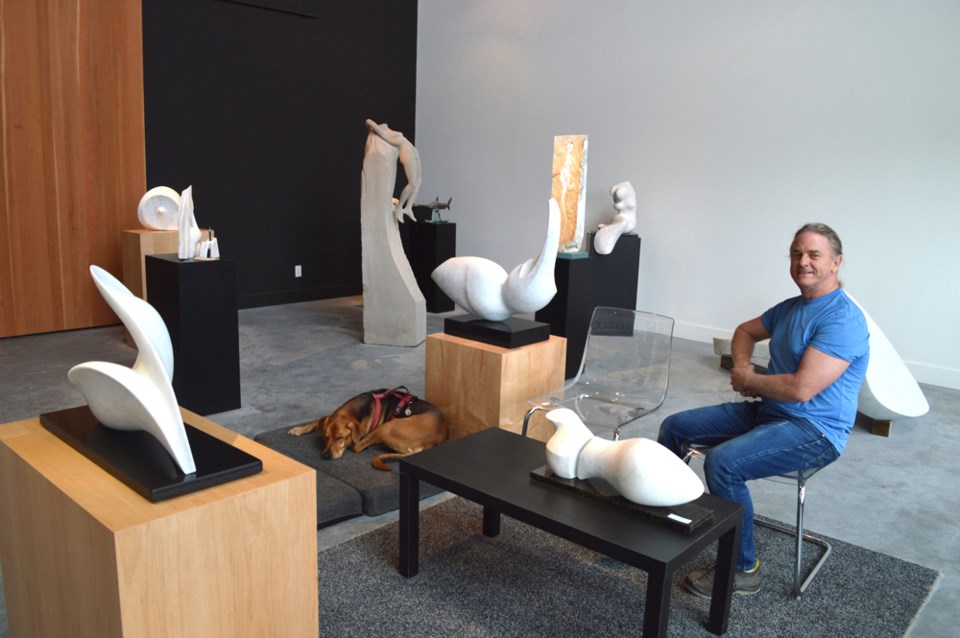 After a few trying years, stone sculptor Michael Binkley found it difficult to find his inspiration.

So Binkley and his wife and business partner Michelle headed to Europe for a year, making stops in Italy and Spain, to rediscover his muse.

Upon returning, the North Vancouver resident opened up his new studio and gallery at #12 – 38936 Queens Way in Squamish. The couple had owned the space for years, Binkley said, but felt it was an appropriate time to start making use of it. He's been in the space since September, dedicating six months to getting it set up and ready to produce and display his work.

"I've really enjoyed the space," he said. "Now, we're just making our foray into the community and trying to connect with people.

"We intend to integrate ourselves more into the community in the coming months."

Unable to hold a proper grand opening for because of the ongoing COVID-19 pandemic, Binkley has instead opted to start a Summer Saturdays in the Studio series, where the studio will be open to the public between 10 a.m. and 3 p.m. on Saturdays in July and August (with the exception of Aug. 8).

There were seven visitors for the opening event on July 4.

"Because it's not in a commercial area, we can't rely on walk-by traffic, so that's why Michelle and I had this idea this past week to dedicate one of the days of the weekend this summer to be here and generate some interest in the new space that we have," he said.

Binkley set up in the space shortly after returning from Europe, as living abroad was a goal for the couple for years before they took the plunge. As part of the sojourn, Binkley worked in Italy and did a two-month residency at the Kitty Harri Sculpture Garden in Andalusia, Spain.

"My creativity had been greatly compromised and needed some sort of jump-start, so we decided that being in Europe for a year would satisfy that," he said. "I'm much more energized and that year abroad was crucial in rediscovering my muse.

"The outward stresses that we were dealing with in years prior resulted in me not getting any artistic inspiration happening at all."

Binkley said inspiration can strike at any time, and that his sources can vary, as he draws on his observations of the world.

Being back in Florence, he said, was just what he needed, as it was where he fell in love with sculpting 40 years ago after primarily pursuing two-dimensional mediums such as drawing and painting.

When abroad, Binkley is somewhat limited in what he can work on, given that his electrical tools, for example, do not work in Europe. However, he has embraced virtual sculpting, where he designs a piece on the computer and it is produced by either a 3D printer or a CNC robot arm.

"I'm able to be mobile with my computer and still create sculptures," he said.

"It does speak to an age-old methodology of creating stone sculptures and that is, for centuries, craftsmen created marble sculptures from clay masters that were done by the artist," he said, noting that French artist Auguste Rodin operated that way. "In other words, for centuries, humans acted like robots to copy an artist's creation in clay and transpose it into stone."

Before taking interest in virtual sculpting, Binkley did not work with clay models, instead embracing direct sculpting.

"I pick up my tools, approach a block of stone and take away what's not supposed to be there," he said. "If I make a mistake, then it's on me and I've got to start over."

Also on display in the gallery are Binkley's haiku drawings, taking inspiration from the word's translation of "cutting." The drawings are black on white paper, with Binkley creating female nudes using 17 vector lines instead of the poem's 17 words.

"Haiku poems have two themes and the theme of the poem is usually cutting two dramatically different ideas," he said. "I decided to use the two colours of black and white, so the black cuts the white and that's satisfying the theme of the haiku poetry in that respect."

Visitors are able to get a taste and try sculpting marble during a visit, and Binkley said the only preparation they need is to wear casual clothing, since it can get dusty.

Binkley's wife and business partner Michelle said holding open houses was commonplace at the former studio space, though not in recent years, which she described as a time of transition.

"For 25 years, we've been involved in our community. We like to reach out and get people interested in art," she said. "We chose Squamish for two reasons: one is that being close to nature is pretty important for us, and also, it came down to cost. What we could afford in Vancouver isn't as much square footage as we could get in Squamish."

Visitors are also able to make appointments to see the gallery by calling 604-984-8574 or emailing info@michaelbinkley.com.