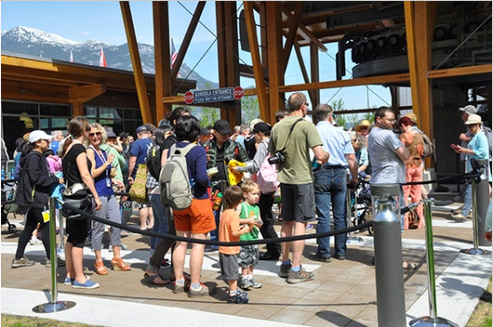 While Sea to Sky Gondola staff would like to be looped into Squamish’s transit routes, the municipality is eyeing its piggy bank.

This month the gondola’s staff sat down with the District of Squamish’s transit select committee to talk wheels and pathways. The new business has been in discussions with BC Parks and the Ministry of Transportation regarding creating a bicycle trail from the Stawamus Chief Provincial Park to the gondola site.

“I think we are making a lot of progress on that,” the gondola’s general manager Trevor Dunn said.

The operation’s staff are also advocating for a transit loop to be extended from Valleycliffe and include the Sea to Sky Gondola. The company has 130 staff members and, since its opening, more than 70,000 visitors have made their way up the gondola’s summit.

Being linked in with the district’s transit would accommodate the business’s staff and encourage Squamish residents to visit the site, while funnelling tourists into the downtown, he added.

“We would obviously like to use it for our employees, but as people get familiar with the fact they can ride to our site and take a bus, I am sure they would take advantage of it,” Dunn said.

Currently the Sea to Sky Gondola operates a weekend shuttle. It runs to the facility’s overflow parking lots at Darrell Bay, Squamish’s Chances Casino and the Squamish Adventure Centre.

“We use Darrell Bay every weekend,” Dunn said of the overflow parking. “There have been a few occasions were we have used the casino’s parking lot.”

Incorporating the gondola into the municipality’s transit route is more complicated than it appears, Coun. Patricia Heintzman said. It may add a 10-minute trip onto the Valleycliffe run, which could affect costs and increase wait times for commuters.

“It might hurt the system more than help it,” she said.

The district would have to weigh the possible benefit of increasing traffic to downtown Squamish and the possible bump to riderships, versus the additional expense and wait times, Heintzman said.

“BC Transit ultimately has to decide if they want it, too,” she said.

Down the road, as Squamish develops into more of a tourist destination, the community may want to consider having two bus systems — one for commuters and one for tourists. The latter could run on a different funding model, possibly one with stakeholders pitching in, and stopping at all the town’s major destinations, Heintzman said.

“You would have to have a critical mass of users,” she noted.

The gondola’s numbers are on track to meet its business goals, Dunn said.  While the facility is hosting a lot of traffic, its services are standing up to the numbers, Dunn said. Gondola staff are ironing out the mechanics of its septic tank, which can handle 20,000 litres of liquid per day.

“We haven’t hit that number yet,” Dunn said, noting staff did recently fix an issue on a single pump in the five-tank system.