Squamish kiters looking for a realignment solution for the Spit

The Squamish Windsports Society has formed a group that's hoping to find a way to raise cash and create a design that will maintain access to the popular launching site.
Mar 12, 2021 4:41 PM By: Steven Chua 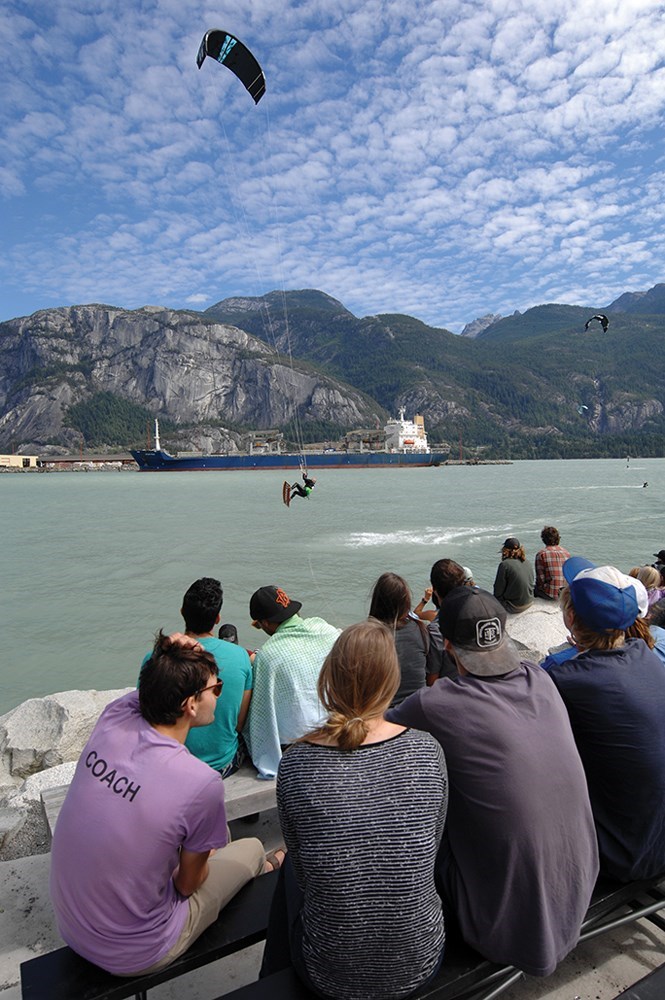 An audience watches kiteboarders at the Spit.File photo/Shutterstock

Squamish's windsports community is banding together to create what they're calling a triple-win for the future of the Spit.

On March 10, the Squamish Windsports Society, or SWS, declared it was creating a volunteer group consisting of engineers, business owners and recreation users, called Realign Not Removal.

This movement arrives as the possibility of a realignment looks increasingly distant. In order to shore up the dwindling numbers of salmon, conservationists are removing the middle of the Spit, which has blocked the fish from accessing the estuary. As a result, the berm has been funnelling juvenile fish into Howe Sound prematurely, decreasing their chances of survival.

Previous plans involving the Spit's future included a realignment of the structure from Third Avenue, but, as of late, it appears funding for the project will not cover the cost.

As a result, it seems like the most likely course of action will involve a removal of the middle of the Spit, cutting off land access to the launching site and its southernmost end.

"The project they're doing is a critical project, but how do we find a solution that benefits the entire community as well? And I think if everybody comes together, we're going to come up with a pretty amazing solution."

So far, Layton said the working group is coming up with a proposal that they may be willing to share in the coming weeks. At the moment, however, that's being kept under wraps.

"We have an amazing idea that would be a showcase piece for Squamish, but, unfortunately,  we're not ready to talk about it yet, because we need to talk to a lot more people before," she said.

Layton acknowledged that a lack of cash is a big part of the barrier that's keeping the Spit from undergoing a realignment.

"We're starting from scratch, you know. Obviously, we need to get funding," she said.

In the meantime, an online petition calling for authorities to save land access to the Spit has amassed around 2,900 signatures as of the afternoon of March 12.

Local conservationists greeted the creation of the working group warmly.

"[The] Squamish River Watershed Society, who with DFO and Squamish Nation make up the Central Estuary Restoration Project (CERP) partners, is very pleased the Squamish Windsport Society is being proactive in finding a solution to their interests with a focus on access. The removal of the Spit has been understood by stakeholders and interest groups for more than a year, so it's very encouraging that there is an initiative underway to find a solution," reads a written statement from Patricia Heintzman, the spokesperson for the Squamish River Watershed Society.

The watershed society is leading the charge on the Spit's alteration, which is known as the Central Estuary Restoration Project, or CERP.

"The [Squamish River Watershed Society] is a strong ally of SWS's initiative and will continue to support the SWS in their effort to provide access to Squamish's great wind," Heintzman continued.

It's anticipated the midsection of the Spit will be removed at the end of this year's kiteboarding season.