"CN is showing the highest levels of disrespect to Indigenous peoples with their actions.”
Apr 2, 2021 10:01 AM By: Elisia Seeber 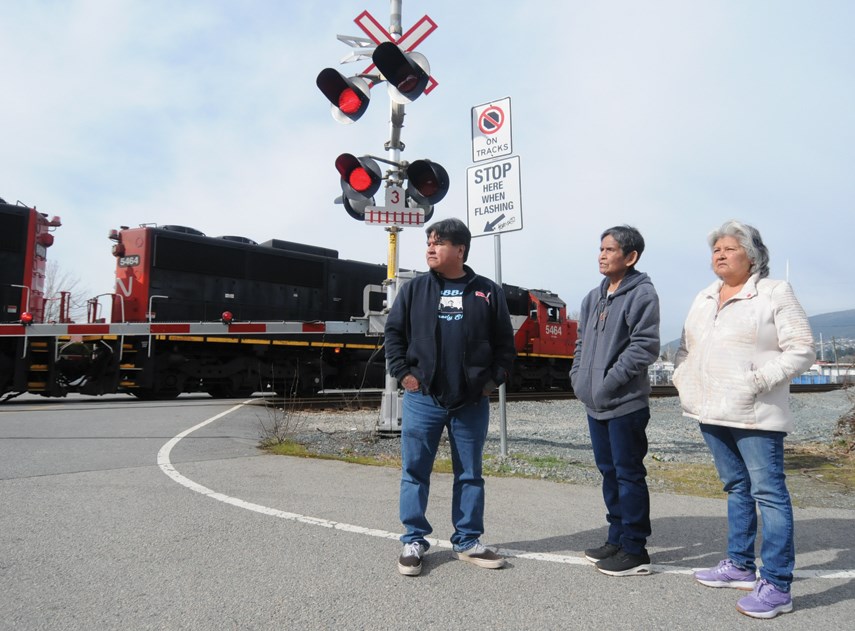 Keith Nahanee and two Elders Tina Harry and Janine Gonzales try to endure the noise of another CN Train rolling past their neighbourhood on the 400 blk of West 1st Street in North Vancouver. Mike Wakefield, North Shore News

The Squamish Nation community is “at its wit’s end” with the ongoing disruptions from rail operations just metres from their homes, and council is ready to pursue legal action if changes aren’t made soon.

The council has been trying since fall to negotiate with the Canadian National Railway Co. to adjust its operations near the North Vancouver communities of Eslhá7an and X̱wemelch'stn. With three rail tracks just 30 metres from some homes in Eslhá7an, near Mosquito Creek, residents say they have been putting up with unacceptable levels of noise, pollution, and health impacts from idling trains for far too long.

Khelsilem, Dustin Rivers, spokesperson for Squamish Nation, said the issue had affected their communities now for “many, many years” and council reopened negotiations in October 2020, in the hope that immediate short-term changes would be made.

Further to this, in early March, the council presented a survey of 300 of its community members’ concerns to CN Rail, which included specific feedback regarding issues around shunting, whistling, and idling during the evening, late into the night, and early in the morning.

Residents have described the noise from trains as being 10 times that of a muscle car revving up and powerful enough to rattle the windows of nearby homes.

"Despite our attempts in good faith to meet with them and to bring our issues forward and to try and solve them, CN has not been responsive nor communicative to our requests and any commitments they’ve offered to make,” Khelsilem said.

“We’re still getting constant disruption to the quality of life of our members in our community from their activities. The community is at their wit's end, they're feeling frustrated that CN is not being a good neighbour.”

So far, a letter has been sent to CN Rail, stating its operations in the area constitute both a nuisance and a breach of s. 95.1 of the Canada Transportation Act.

“Given the unique nature of Squamish reserve lands, Squamish is entitled to both damages and injunctive relief to remedy this nuisance,” lawyer Robert James wrote.

“Additionally, if it so chooses, Squamish may seek relief from the Canadian Transportation Agency. If Squamish does not hear from CN within 45 days with a definitive plan to address this nuisance, Squamish will commence proceedings to obtain such relief as is necessary to remedy these issues.”

Khelsilem said taking legal action wasn’t the route the council wanted to go down but the situation had escalated to a point where something needed to be done.

“CN hasn't taken our concerns seriously up to this point,” he said. “We wish they would. Our leadership feels that we must explore all options to support our community members.

“It's a breakdown in the relationship and, frankly, CN is showing the highest levels of disrespect to Indigenous peoples with their actions.”

While CN Rail has progressed on various initiatives over the past several years to reduce noise, such as rail lubrication and installing automated gates at at-grade crossings, Khelsilem said more operational changes were needed.

The short-term adjustments they are calling for include timing the rail operations so that they do not occur at night and moving idling trains to areas that are not residential or in close proximity to any of their reserves.

“There are immediate solutions on the table,” Khelsilem said. “But for some reason, CN has not moved on any of them.”

In the long term, they are hoping for the adoption of best practices used in other nearby areas, the erection of effective sound barriers, the relocation of disruptive operations, and the idea to move the railway underground or below grade to be explored.

In response to previous complaints, CN Rail issued a statement saying the whistles are required by law for safety reasons and that idling is necessary for almost half of its fleet of locomotives, which are not designed to be easily turned on and off.

“CN is aware of the fact that it operates in close proximity to the communities through which we travel and is committed to make every effort to minimize the effects that may occur as a result of these operations," the statement read.

Squamish Nation is awaiting a response from CN Rail.