A GoFundMe campaign has been set up to help raise money for the Squamish Nation Women’s Street Team to continue their work
Nov 1, 2020 10:00 AM By: Elisia Seeber 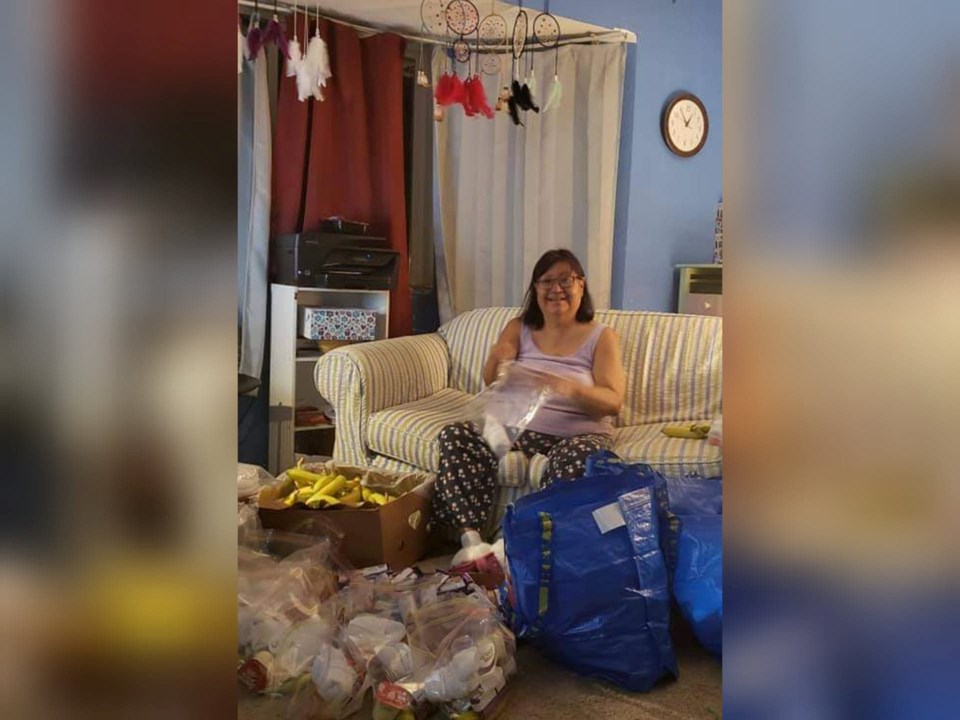 If there is one lesson Squamish Nation member Alice Paul wants to pass down to her children and grandchildren, it’s “to always help the ones that are less fortunate than us, no matter what.”

Every week for the past couple of months the 62-year-old and a small team of volunteers have been busy making sandwiches for packed bag lunches that are handed out to people experiencing homelessness on Vancouver’s Downtown Eastside.

Paul is one of the founders of the grassroots group Squamish Nation Women’s Street Team helping to address food insecurities on the DTES, which has only worsened since the COVID-19 pandemic struck.

The team of determined women pay for all their supplies out of their own pocket and get together at Paul’s home at X̱wemelch'stn, Capilano Reserve 5, to organize the packs each week.

She said the street team then picked up the packs and handed them out to people on the DTES who were “so grateful and have smiles on their faces.”
Last year’s Vancouver Homeless Count found 2,223 people were experiencing homelessness, with 39 per cent of all respondents identifying as Indigenous.

“The people downtown, they don’t ask to be where they’re at,” Paul said.

“I always tell people, ‘Don’t turn down anyone because you don’t know what their lifestyle was.’

“You must look at their side of the story because one day you never know if you’re going to wind up there. It can happen to anybody.”

The grandmother, who is on a disability pension, said she had always enjoyed being involved in community work, and about 15 years ago would go to Oppenheimer Park in downtown Vancouver to hand out clothes and food, but slowed her volunteering when her grandkids, now 16 and 19, came along.

“When my mother was alive, she helped people a lot and she never said no to anyone,” Paul said.

“Now, I like to carry that on, and I teach my own children and my grandchildren the same thing. I always tell them we need to help the ones that are less fortunate than us, no matter what.

“We help who we can. Just helping one person can make a big change.

With such an increasing demand, the group found they were needing a helping hand to keep their efforts going.

Ann Phelps, who lives in New Westminster, said the group popped up on her Facebook page, and after reading about their need for funds decided to help by setting up a GoFundMe campaign to keep their mission alive.

“They aren’t part of a big huge charity, and they don’t have corporate sponsors or fancy outfits, they’re a bunch of about eight women who get together and pack lunches,” she said.

“A lot of them are elders, so they’ve seen a lot of things in the world, and they might have known what it’s like to go hungry at some point.

“They’re willing to go out of their way and work as a team to try and help people, and I think it’s just a really nice way to go about it.”

The campaign has almost reached its goal of $3,500, but Phelps is now hoping to reach $5,000 to give the group a safety net, before finding a more concrete way of funding their street project.

With winter coming, the group has also been handing out socks, toques and gloves, and is happy to accept more donations to help keep people warm.

Paul said she was shocked by the generosity the wider community had shown so far.

“I’m so grateful for Ann and all her help,” she said.

“I’ve never even met her in person – the campaign just keeps going up and up, and the more I look at it I get teary eyed.

“There’s a lot of good people out there.”

Donations to the cause can be made at the GoFundMe page,  Squamish Women Street Team.

Elisia Seeber is the North Shore News’ Indigenous and civic affairs reporter. This reporting beat is made possible by the Local Journalism Initiative.