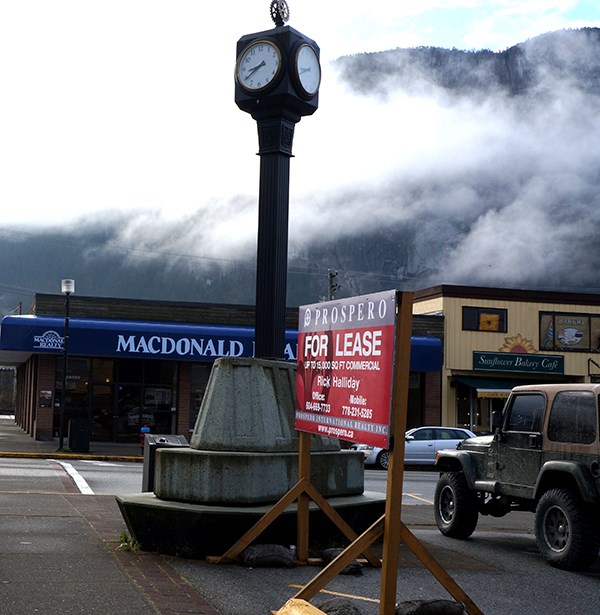 Downtown Squamish:Local councillor says things aren't so rosy in the district when it comes to business.Jennifer Thuncher/The Squamish Chief

Susan Chapelle is growing a little sick of the happy face many in Squamish put on entrepreneurism in the district.

Chapelle, district councillor and owner of Squamish Integrated Health, which employs about 23 people, doesn’t think Squamish is on the right track when it comes to attracting and keeping small to medium businesses.

“Over the last 15 years it has been really difficult to own a business in Squamish,” she said. “Everyone is talking about entrepreneurism, that is great, but entrepreneurism can’t just be all from your house.”

The rate of taxation on small businesses is too high and likely, in the current budget, going higher, Chapelle said.

“We always scream about our residential taxes going up and then the businesses go up at a rate that is even higher than that – 2.8 per cent,” she said, adding she is losing the argument against raising business taxes with others on council.

Chapelle asked: What happens to businesses that have received substantial tax incentives when the incentives run out?

“Eight dollars per square foot, triple net, per month in the business park” is too high, Chapelle said.

“My biggest concern right now, whether it be general, commercial, office retail users or industrial in particular – where we are actually seeing the highest interest level – is taxes going up,” he said.

“There’s a natural tendency to tax business at a higher rate than residential… and then residential doesn’t tow its line, ever.”

McCartney said he thinks the tax system is set up as it is in many communities because it is popular with more voters.

“The reality is a little bit [of tax] to the businesses and a little bit to residential is easier to push through the machine,” he said.

According to Chapelle, instead of setting up brick and mortar shops in Squamish, business owners are incentivized to work from home, which does nothing for Squamish’s tax base, she said.

“That is the most expensive way you could possibly do business for a community,” she said.

Chapelle said the empty storefronts downtown, where her office is located, are a result of several negative factors including high taxation, high rents, the cost of bringing aging buildings up to code and a lack of appropriate space.

“And that is not to mean that innovative businesses can’t go in and make it work, but you would have to have an already perfectly working model to go in and be able to pay the taxes, pay the triple net and afford the upgrades to bring it up to code.”

Small employment spaces with housing above, of which there are more downtown, don’t cut it, Chapelle said.

“If you want to draw companies into town and rec tech and companies that are over 10 employees, you have to have space for employees to work and it is not going to be in 500 to 1,000 square feet.”

Mayor Patricia Heintzman said capitalism plays a role in why some businesses don’t make it -– they are just not the right fit – but added that more people living downtown will help.

“We have to be smarter with our land-use decisions to make sure we are encouraging that downtown and we are trying to figure out how to do that, it is not an easy task. We have incentive programs for people to develop downtown – we put another 1,000 people downtown and all those [storefronts] will be full.”

Chapelle said the developers are getting incentivized, yes, but they don’t need it.

“We have left out small business that is dying in Squamish,” she said.

McCartney agreed with Heintzman that increasing the number of people living downtown is the only way for downtown businesses to be buzzing.

“As the Oceanfront gets going and that investment starts taking place, it is exciting because more people are going to want to live there,” he said.

Chapelle would like to see unrestricted zoning in the district, especially for “clean” businesses.

“When I moved here there was no [commercial] zoning, everything was industrial,” she said. “Nothing has changed through zoning, although our Official Community Plan has suggested there should be changes to the zoning.

The newly minted employment land strategy should help, according to Chapelle.

“The district has done some absolutely fabulous work,” she said, “but the policies are still restrictive.”

McCartney said that he turns away 50 per cent of the requests from outside Squamish he gets from businesses wanting to relocate to Squamish, because the district just doesn’t have what people are looking for. “We are a low inventory market,” he said.