Installing a new channel is hoped to prop up plummeting salmon population
Dec 6, 2018 6:36 AM By: Steven Chua 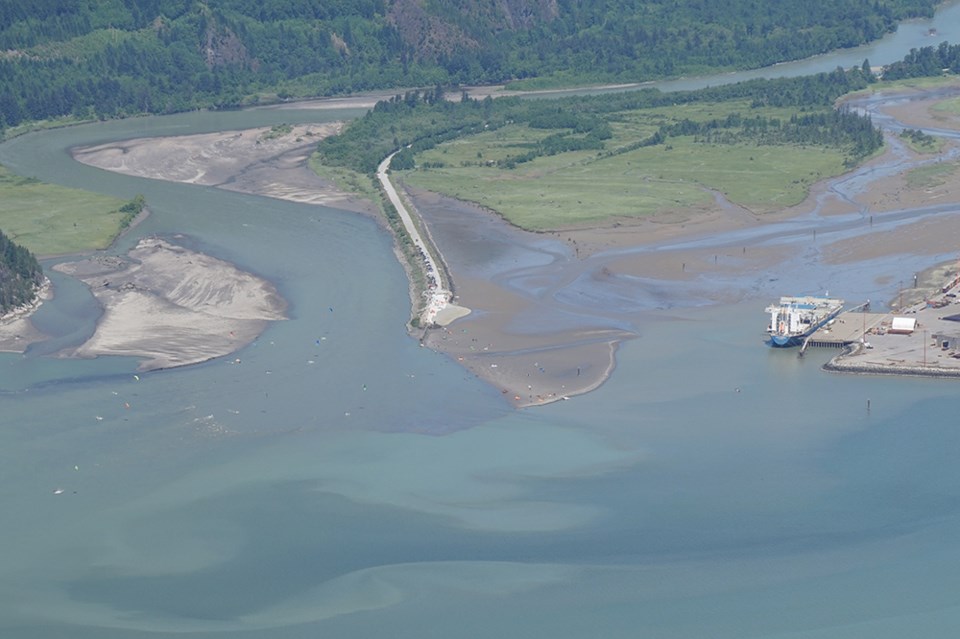 Hoping to restore dwindling numbers of salmon in the area, the District has approved the first of what’s expected to be three major alterations to the Squamish Spit.

On Dec. 4, council gave the green light to replacing one of the culverts on the Spit with an open channel that would pass through the berm. A new five-metre-wide single-lane bridge would be added on top to connect the gap.

If all goes according to plan, this project will be done around winter 2019.

“This habitat is essential to the young chinook, giving them a chance to grow and fatten up before going out to sea, as well as giving their bodies time to make the physiological changes necessary to go from fresh to saltwater,” said Chessy Knight, president of the watershed society in an email to The Chief.

This marks the first step in the latest effort to modify the Spit in a manner that would help shore up diminishing salmon numbers.

The construction of the Spit — also known as the training berm — has been blamed by conservationists for the dwindling population of the fish.

Fisheries and Oceans statistics show chinook salmon populations in the Squamish River dropped from 19,000 to 6,000 in the decade after the Spit was constructed in the 1970s.

It’s believed the structure funnels juvenile salmon out into Howe Sound before they have a chance to mature.

“Think of the Squamish River as a superhighway because of the presence of the training dike [the Spit], given its velocities and currents,” said Knight.

“If you are a small (40 to 60mm) fish and you need to get off that highway to go into the central estuary, you just don't have the strength to battle the current in order to make your way through any of the [Spit’s] culverts.”

Before the Spit was built, the fish would have a chance to stay in the estuary and grow before going into the deep sea.

As a result, conservationists have lobbied for either the alteration or removal of the structure.

So far, however, authorities have been taking the approach of modifying the Spit rather than removing it.

Between 1994 and 2013, culverts were installed at nine locations across the training berm to allow for fish to travel from the Squamish River to the estuary.

However, it was found that juvenile fish often had troubling swimming through the passages. The tide level and river velocity had to be at certain conditions, which didn’t happen very often.

Council’s decision would allow for the replacement of one of these culverts with an open channel, which would then be spanned by a new bridge.

“This site was selected because of its stability,” said Edith Tobe, executive director of the watershed society. “Where it’s not within the flood protection dike of the river, and it’s not in the immediate direct path of the Squamish River.”

This would be acceptable, given the environmental benefits, staff said.

There are other plans for the Spit’s future that are expected to be discussed in the coming months.

The second proposed change would be realigning the lowermost kilometre of the Spit so it would stop the structure from driving juvenile salmon out to deep sea, away from the estuary where they can grow more safely.

Finally, the third and final change would place a controlled intake structure under the CN Rail Spur line on the eastern edge of the central estuary. This would reconnect the Bridge Pond and Cattermole Slough. It’s hoped this would improve the water quality.

Conservationists believe the Bridge Pond has the potential to be a high-quality estuary habitat, but since the town drains its stormwater in the area, the water quality isn’t the best, Knight said.

The Squamish River Watershed Society has amassed about $1.8 million from various contributors for the project, which is enough to carry it through this first, initial phase.

Realigning the Spit and adding the intake structure will likely cost more, though the society says the project has enough momentum that it will likely be able to find more cash.

***Editor's note: Due to a formatting error, the last line previously did not include the Squamish Windsports Society. This item was included in the original print story, but was cut off when posted online. For the record, the society had input into the matter, as well.