The trio dropped 30 metres from above the falls and have been located in one of the lower pools, police say
Jul 3, 2018 12:25 PM By: Haley Ritchie 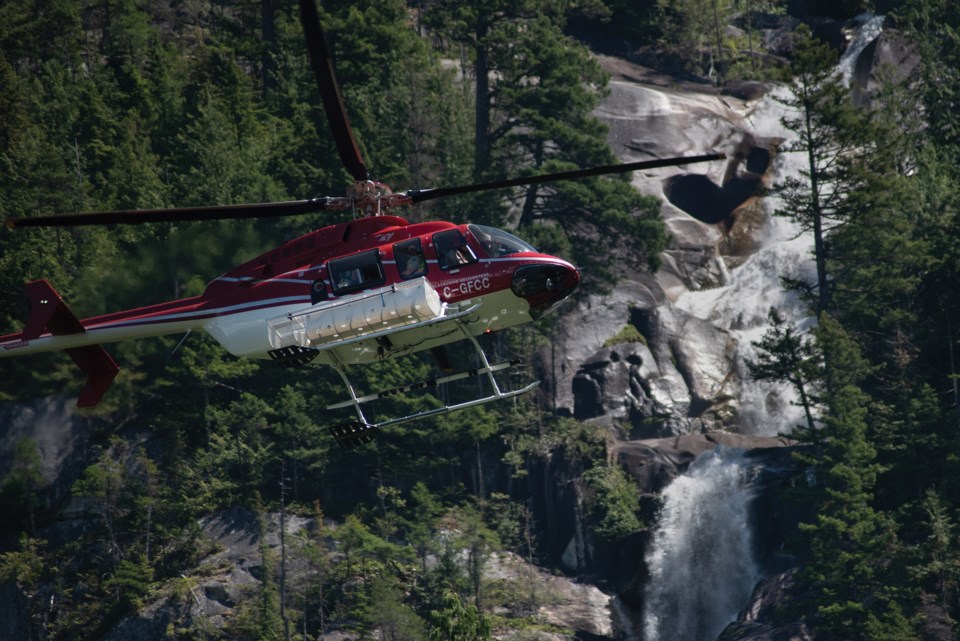 Underwater dive teams were at work on Wednesday morning to recover the bodies of the three people who dropped 30 metres from the top of Shannon Falls.

BJ Chute of Squamish Search and Rescue said that RCMP divers are working to come up with a plan to retrieve the fallen swimmers.

The operation is being headed by the RCMP at this point.

"At around 8:30 p.m. [Tuesday] night, teams were able to confirm the location of the three people in one of the lower pools,” said RCMP Cpl. Sascha Banks in a news release.

“The RCMP and Squamish SAR have transitioned to a recovery of the bodies from the pool but the terrain is extremely difficult, very dangerous, and the water flow will be heavy with the warm temperatures today, increasing the risk to those in the recovery effort."

Police have said they won’t release the names of the young people or confirm they are local until all family are notified.

On Tuesday at noon, Squamish RCMP received a call of three people who slipped and were dragged into the current while swimming in one of the pools near the top of the falls.

The woman and two men who went over the pool’s ledge were hiking with a larger group of friends.

The trio were declared missing in the early afternoon Tuesday, and Squamish Search and Rescue scrambled to quickly close down the park and attempt to find them.

During the search, the parking lot of the provincial park was filled with ambulances, fire personnel, BC Parks officials and RCMP.  Lions Bay Search and Rescue, North Shore Search and Rescue were also on scene to assist, and an air ambulance was on standby. **

A helicopter was deployed several times to scout from the air and transport searchers to the area above the falls. Search and Rescue volunteers trained in rope rescue and swift water rescue searched the water and ground.

Squamish SAR manager Landon James said they were also able to review footage from a bystander who captured drone images from the area.

Helicopter crews were grounded after dark, but the search continued Wednesday morning with specialized equipment, including a dive team equipped with an underwater camera.

On Tuesday, James said there was still the possibility that the three managed to escape the river, but on Wednesday morning RCMP confirmed they had located the bodies of the hikers.

Despite the popularity of the Upper Shannon Falls Hiking Trail, James said the water in the pools is extremely cold. The current varies by time of day and season, making it an unpredictable area.

“It’s a very strong current; it is not a place anyone should ever go close to,” he said. “Even if there is a trail that goes right down to it, stay away, the rocks are slippery even 10 feet up. Just don’t go into that river.”

James explained that the pools at the top of the falls are not like a riverbed, but rather are smooth, wet rocks that can be slippery and difficult to grip. On Tuesday, RCMP said the area was difficult for volunteer rescuers to access because of the danger.

“The currents change drastically throughout the day, especially with the sun on the snow and that kind of thing. We always say, water is nice to look at but don’t get in it unless you know what will be in there,” said James.

The entrance to Shannon Falls remains closed as the recovery operation takes place.

-With files from Steven Chua

**Please note that this story has been corrected since it was first posted. The first article incorrectly stated that TEAAM was on the scene, that organization was not.

1
Woman dies in head-on collision in North Vancouver
2
What is it like inside the new Squamish Overdose Prevention Site?
3
B.C. conservation officer who refused to kill 2 bear cubs still fighting to return to work
4
Feds chip in $40.5 million for Westwinds seniors housing project in Squamish
5
Suspect leaves wallet at the scene of the crime after dramatic chase