The improvements to the area are meant to restore salmon populations
May 15, 2018 5:04 PM By: Haley Ritchie 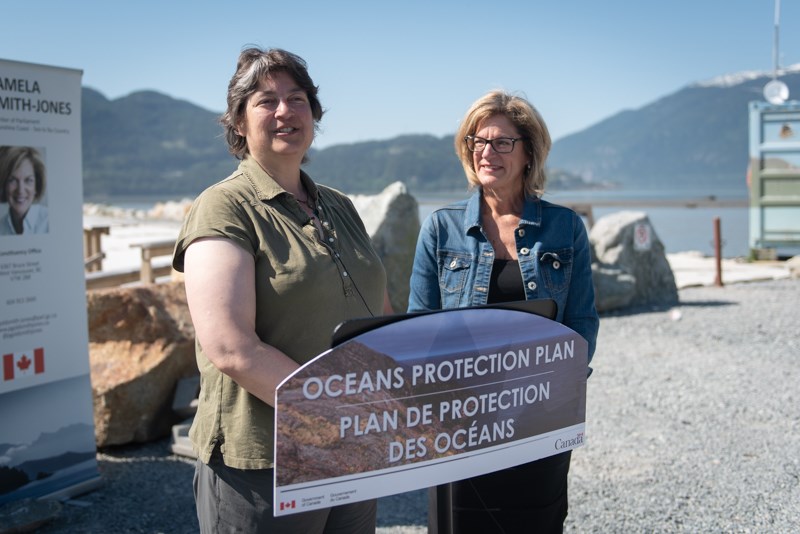 The federal government is contributing $1.5 million towards improving salmon habitat around the Squamish Spit, it was announced Tuesday.

MP Pamela Goldsmith-Jones made the announcement at the southern tip of the training dike.

"We know that this place is a life-giving area," said Goldsmith-Jones. "It's the nursery and the refuge habitat for numerous fish and other species, and it contributes to marine biodiversity, providing the foundation for commercial, recreational and Indigenous fisheries."

Also in attendance at the announcement were Edith Tobe of the Squamish River Watershed Society, Kim Stegeman of the Squamish Terminals, Randall Lewis of Squamish Nation and Mayor Patricia Heintzman.

The $1.5 million will go to the Watershed Society over the next five years. The funding is part of the federal government's larger $75-million Coastal Restoration Fund.

"I look forward to seeing how this evolves and I believe entirely in the leadership of Edith Tobe and the partners who are going to make this happen," said Goldsmith-Jones.

Tobe said the training dike, originally built in the 1970s for a coal port that never materialized, has had a serious effect on the local salmon population.

"Basically the estuary is like a giant lung, that cleans out pollutants and toxins from the environment," she said. "That's what this estuary wants to be, and opening up parts of the training dike will really allow it to function that way. Fish are really driving the project, and hopefully improving habitat particularly for Chinook salmon, but there's a lot of side benefits that we're really excited to be exploring."

The project includes replacing culverts to help connect the river with the estuary, and Tobe said the final vision for the project is the "realignment" of the Spit Road, which would direct windsurfer traffic down a new road that would extend off Third Avenue and allow key areas of the jetty to be removed.

She said the $1.5-million from the federal government, in addition to around $180,000 from BC Hydro and $33,000 from the Pacific Salmon Foundation, will allow the Society to leverage even more funding to bring that plan into reality.

“Ultimately, it’s probably going to be close to a $5-million dollar project, because it is quite vast,” said Tobe. “The timeline is literally right now. It’s a five-year project that we have funding for, and that’s our timeline. We might have it done in the next year or two, you never know.”

Representatives from the Squamish Windsports Society were not present at the press conference, but spokesperson Chris Rollett said they are involved in discussions around the future of the Spit.

"The Watershed Society has been very open in their discussions about what they're trying to achieve and how recreation, industry and wildlife concerns can all work together to create a positive outcome," he said.

Rollett said he would be supportive of an alternative road to the Spit, but he said he isn't expecting the current situation to change quickly for kiters.

"As far as actual Spit relocation that would impact the Windsports Society, that's just a huge amount of money and logistics," said Rollett, adding that in the meantime the group is encouraging all users of the Spit to be "good stewards of the area."

** This story has been updated on May 15 to include extra funding details and timelines. The headline was modified on May 17 to clarify the goal of the funding.