What is behind the sockeye salmon collapse? 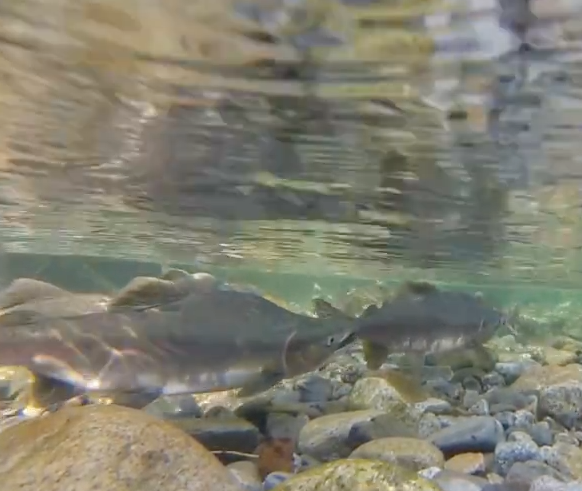 The sockeye salmon run this year, is, according to  Fisheries and Oceans Canada and other reputable sources, down considerably.

The reason for this, depends on who you talk to.

Aaron Hill, executive director of Watershed Watch Salmon Society, says part of the problem is the fisheries ministry has dragged its feet on the Cohen Commission recommendations.

The Cohen Commission, created in 2009, issued a report in 2012 with 75 recommendations on how Fisheries and Oceans Canada (working with its provincial partner) could monitor and safeguard the Pacific salmon fisheries.

In its most recent update (Sept 28) the ministry boasts of reaching 67 of the 75 recommendations.

Hill though, says while he’s encouraged by the ministry’s improved action on the Cohen Report recommendations in the past year, says it’s still not moving fast enough.

“I give the DFO [former name of Fisheries and Oceans Canada] some credit — they have made progress. The last update, a year ago, was pretty dismal. Also, to say they’ve acted on recommendations, is somewhat disingenuous, if they do anything, no matter how minimal, they consider the recommendation to be ‘acted on,’” said Hill.

The Cohen Report cost $37 million and was an audit of how Fisheries and Oceans Canada was handling fisheries. Hill called last month’s update very “self-congratulatory.”

He says there are several environmental reasons why the Sockeye run has collapsed but adds open net fish farming is clearly a factor.

“There’s no question open net farmed salmon is spreading diseases to wild salmon, yes there are other factors, but salmon farming is one we can control.”

Local conservationist, John Buchanan, who has been consistently monitoring local salmon streams for the past 12 years, is also critical of Fisheries and Oceans Canada’s management of salmon fisheries.

“I’m not an expert on it, but I know what they’ve been doing. Yes fish farms are a problem, but so is the commercial fisherman and they [the ministry] don’t regulate them properly,” said Buchanan.

He gives the example of the pink salmon run, which he has monitored closely in local streams.

“Pink salmon come in every two years. Four years ago we had a really good run, so the DFO opened it up to commercial fishing for the first time in 26 years. I was on two trawlers, I’m not opposed to fishing, but I was astounded at how much fish they took.”

As a result, says Buchanan, this year’s pink run was decimated.

“The only place I saw pinks was over at McNab Creek, two years ago I counted 7200 fry, and this about 6200 this year (approximately) so not much change.”

He explained that salmon come into McNab Creek via the Sunshine Coast and avoid most of the trawlers on the Lower Mainland side of Howe Sound. “I’ve talked with captains, everyone on this side of Howe Sound saw that the pinks were decimated, everyone in fisheries knows it, but no one’s written about it.”

Buchanan adds that fisheries need to be better managed and soon, or we could be facing a complete break down of the Pacific salmon fishery, similar to the decimation of Atlantic cod.

“The problem is the DFO can’t give you the answers, and they’re still managing the fisheries. They can’t tell you definitively where to fish because they don’t know.” He notes that the Alaska salmon fishery is much better monitored and has been working fine for decades.

Hill says Fisheries and Oceans Canada has done some things right. Funding for monitoring has increased in the past year.

“The salmon fisheries here have some similarities to Atlantic cod, the same management dysfunction is here. Definitely many salmon runs in B.C. are in terrible shape, but also, there are still very healthy returns in some areas, we just need better management so we don’t deplete those stocks. But the DFO is still not moving fast enough.”

Hill adds that he is encouraged Pamela Goldsmith-Jones, MP for West Vancouver-Sunshine Coast-Sea to Sky Country, has publicly urged a transition to land-based fish farming in Parliament.