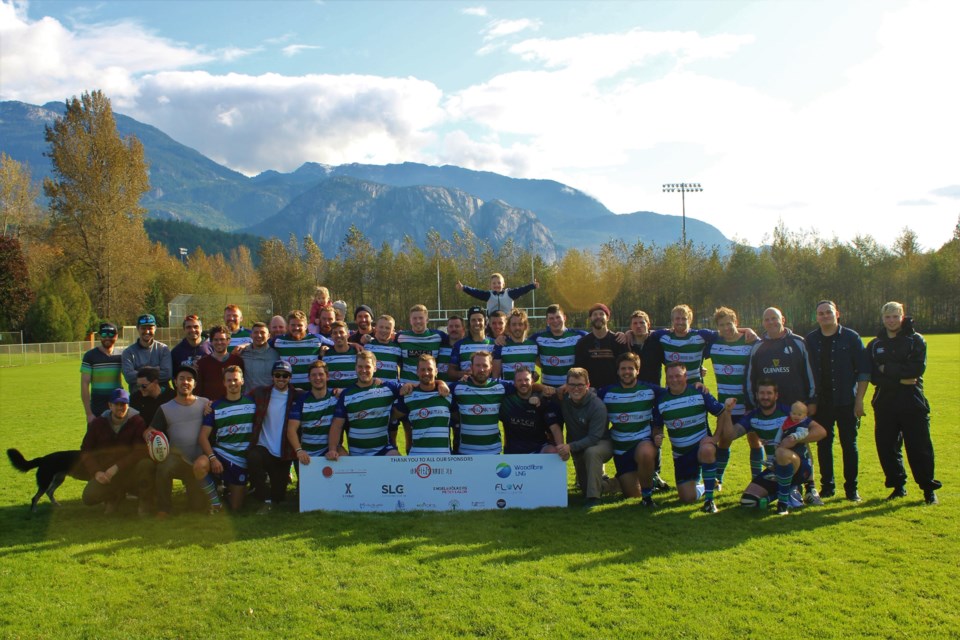 Pandemic aside, Sea to Sky rugby programs are enjoying a heyday.

To start, the Axemen Rugby Club continued its progression, with its top men's team earning promotion for the second consecutive year.

With the BC Rugby Union season cut short due to COVID-19, the Axemen, unfortunately, won't have another trophy for their case despite finishing tied for first in Division 2 in terms of points ratio after posting a 9-1 record while outscoring opponents by a league-best 447-74.

Still, a year after winning the Division 3 title and climbing up a league, it was enough to secure yet another promotion, this time to Division 1.

"It's been a lot of fun. It's a testament to all the hard work put in by the coaches and the players and the general growth of interest and performance level in the sport," said club captain Neil Irwin. "It's a nice position to be in as we keep improving and try to keep going up."

Irwin said jumping up to Division 2 meant the Axemen had to make some adjustments, including dealing with a step up in physicality, which worked to a T. One major factor was creating an "inclusive" game plan to allow all the players on the pitch to contribute.

"The coaching team had a plan to combat that, to improve our play and match that," he said. "[We had] lots of continuity in our place. We tried to link up and keep the ball moving. We didn't have any weak players on the field and everyone had to play their part.

"Our coaches focused on getting our skill level up across the board so everyone could play a part, and on the other side of that, we just worked really hard on a strong defensive game, staying aggressive and physical against these new teams we were playing for the first time."

Moving up another level will mean the Axemen seeking to reach a higher gear against a new set of competitors whenever play resumes.

"We'll expect the players to be more skilled — stronger, faster, fitter," Irwin said. "And the opposition coaches will have a more developed game plan to attack our weaknesses and pick us apart."

Meanwhile, the new Axemen men's team, with newer, younger players and veterans interested in playing at a social level, finished eighth overall in Division 3 in its first season while the nascent women's team played some competitive matches against established clubs, pulling out some victories.

"We're seeing the interest level grow and grow and it'll be a slow process, but it's been massively positive," Irwin said.

Irwin hopes to have some skills development and training sometime soon, though full-contact practices will be further down the line, adding that the club is ready to resume when safe to do so.

Meanwhile, the Whistler Wolves of the BC Rugby League (which fields 13 players at a time compared to rugby union's 15) are seeing their inaugural season delayed because of the pandemic.

Club president Blake Stewart said on June 6 that he had recently met informally with a Canada Rugby League board member, leading to some hope that proper training could resume soon.

"It's a bit hard to run a rugby team in the current times when you've got to be two metres away from everyone and our game is built on contact," he said. "We're still confident that by the end of the year that we will have had a season."

The Wolves' season was scheduled to start back in May with its first home game slated for later this month.

Stewart added that the response has been strong, though fallout from the pandemic reduced numbers from around 35 to a group of about 15. Most players have been from Whistler, though there is interest from Pemberton and Squamish.

Recruiting continues, however, as the Wolves meet at Tapley's, physically distanced, of course, on Thursday nights at 6:30 p.m. Stewart expects to see an uptick in interest as reopening continues.

"They're wanting to get involved in some group activities. It's good for people, after this isolation, to get back involved in a group that will help your health, both physical and mental," he said. "We're a community club. We're all friends."

For more information, check out https://www.facebook.com/WhistlerWolvesRL/.