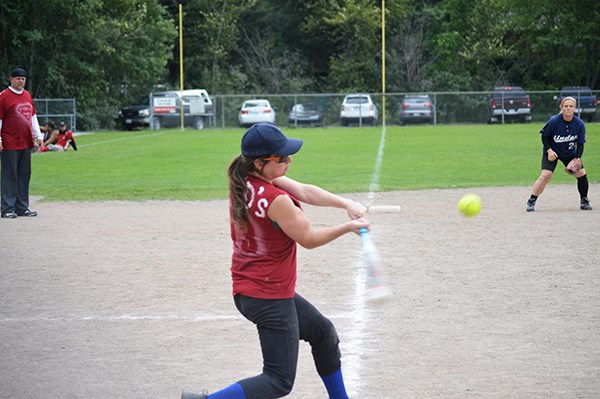 Thirty-six teams took part as the Squamish Slo-Pitch Association hosted its annual May long weekend tourney. More than half came from out of town.

In the A final, Shawshank came out on top Monday afternoon against the Unders, while on the diamond next door at Hendrickson Field, Where’s My Pitches bested PWT in the B pool.

Over at Brennan Park, Hooligans came out ahead of Crows for the C division, while Trashers were tops in the D pool, beating the Corn Stars.

In flag football, the bantam Hitmen took on the Giants, starting out with Reniel Belandres running in for a QB sneak to score on the first play of the game on the weekend. He added the two-point convert on a button-hook play to Kolby Wilton, putting Howe Sound up 8-0. Belandres had a huge game, finishing with four touchdowns, three of which came from interceptions.

Wilton, Kaden Nicholls and Jack Harris each scored a two-point conversion while Marcus Hernandez got a pick-off of his own and ended the game with a one-yard touchdown to keep the team’s undefeated streak alive with a 36-6 win. Belandres is leading the league with 11 TDs, one two-point conversion, fives sacks and five interceptions.

The junior Hitmen also played the league-leading Packers. They fought a hard battle with the lone TD coming on a 15-yard rush by Matt Seamans, although the team fell short, 26-6. Troy Sam, Ryle Mabaloug, Damien Joseph and Kaden Ferguson all had huge games on defence.

The Quest Kermodes signed more new recruits on both the men’s and women’s soccer teams.

On May 18, the team added Azam Kabani from Burnaby’s Moscrop Secondary to the men’s team. In 2012, he won MVP honours for the B.C. metro division.

Five days earlier, Quest signed Nicholas Glavas, who averaged 15 to 20 goals a season for Prince of Wales Secondary in Vancouver.

The women’s team also continued to add new players, the latest being Aria Druker, who led her team at Vancouver’s York House School in assists. She also helped the school win a provincial championship.

The field hockey program, slated to start Monday, May 23, has been bumped a week and will start this Sunday, May 29 on the field at Quest University.