Let’s keep the rescue numbers low by not letting our guard down.
Apr 8, 2021 8:37 AM By: The Chief editorial staff 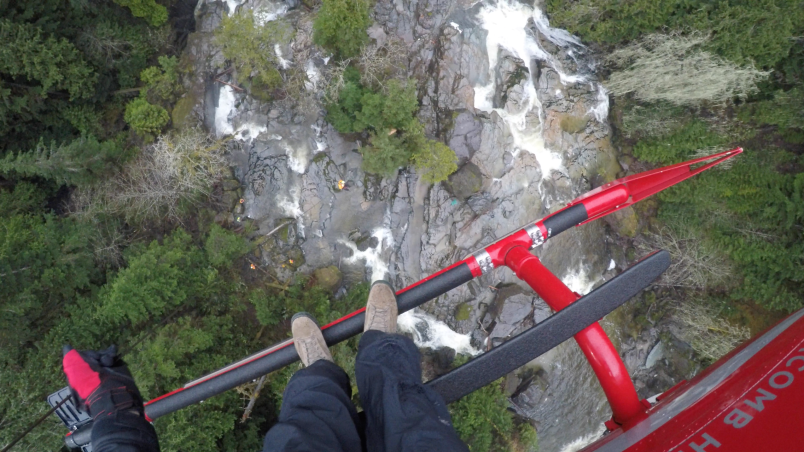 While a welcome sight if you are in distress, let's keep SAR volunteers bored this summer. File photo/Rob Munday/Blackcomb Helicopters

With the weather turning more excellent and more people looking to play outside as restrictions tighten, we’d all best get prepared for what will likely be another busy search and rescue season both in the backcountry and out on the water.

Whistler Blackcomb has been shut down early by the provincial health order, cutting out one of the main sources of outdoor recreation in the Sea to Sky.

Restaurants have had indoor dining options removed entirely, and group fitness options for gyms have been eliminated.

We’ve seen it once, and we’ll likely see it again. When provincial health orders remove indoor entertainment options and close down resorts, people go to one place where there are still plenty of ways to enjoy themselves outside — and that’s Squamish.

Recently, Squamish Search and Rescue has begun planning for a possible influx of backcountry skiers hitting local mountains. If they can’t get fresh powder at Whistler Blackcomb, there’s a good chance they’ll seek it in the slopes surrounding town.

So far, we have been relatively lucky.

From March 29 to the morning of April 5, there were no callouts for ground rescuers.

There was one heroic rescue on Howe Sound by Royal Canadian Marine Search and Rescue — Station 4 Squamish on Sunday.

Let’s keep the rescue numbers low by not letting our guard down.

With last year pulling in record-breaking 120 ground SAR callouts, we need to make sure that everyone who goes out into the backcountry follows BC AdventureSmart’s three T’s. These are: trip planning, training and taking the essentials.

People going on any trip should share their plans and return time with an emergency contact who can reach out to authorities if need be.

Those who engage in any backcountry activity must ensure they are trained and competent in their chosen activity.

Furthermore, they must be capable of doing at least a limited form of self-rescue.

There have been several cases where a helicopter hasn’t been able to land on tricky terrain, or some circumstance prevented SAR members from reaching an injured party.

Having everyone learn at least rudimentary self-rescue skills is critical. Some examples can be as simple as learning basic hauling systems.

It’s imperative to take appropriate supplies, and enough food, water and clothing to last a while in case rescue teams are inundated with calls, creating a backlog.

If you are heading out on the water, too, make sure you have all the necessary equipment. Transport Canada has lots of information on their site of what is needed on watercraft.

Conditions on Howe Sound can change in an instant — a beautiful and peaceful trip can turn choppy and dangerous, for example, as happened on Easter.

It’s up to us to make sure this coming peak season is a safe one.

Our rescuers in Squamish are all volunteers and they deserve a summer too.