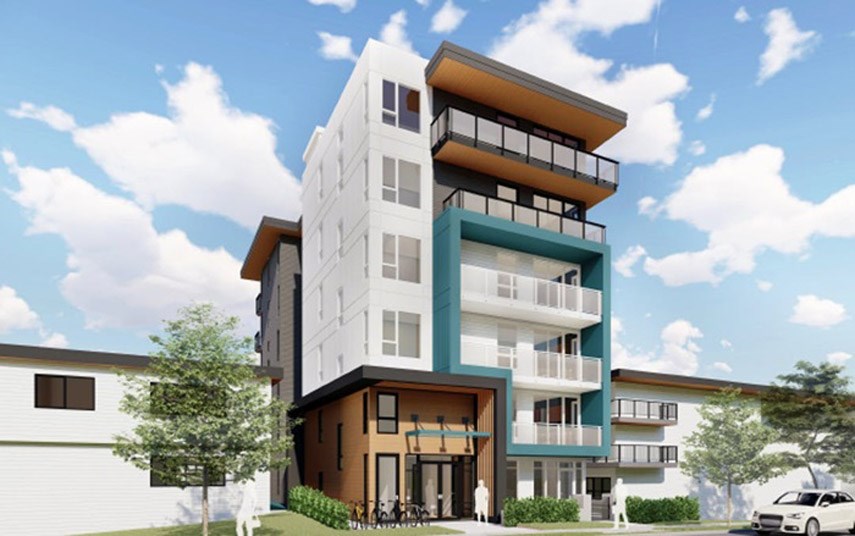 City of North Vancouver council has approved an all-rental building and childcare facility in Lower Lonsdale with no parking for residents, a first of its kind in the modern era.

The six-storey project at 133 East Fourth St. from Three Shores Development includes 23 rental homes, three of which will be offered at below-market rates. The site is currently home to the Gospel Hall church.

Unique to the project is the zero underground parking spaces for residents or visitors. Instead, the daycare will have one surface parking spot, and the developer is pledging to provide two more spots at another site on the same block the company is planning to redevelop.

At a public hearing held Monday (July 12), the proposal was not popular with its nearest neighbours who urged council to say no over fears the project would make it even harder to nab on-street parking, and that the daycare would bring undue noise and congestion from parents dropping kiddos off.

Tracy Jeffery, who lives in an apartment across the lane, said the building should only be approved with at least one parking stall per unit and absolutely no daycare.

The proposal had many supporters in the business community, however, including employers who said the shortage of rental apartments was a threat to the North Vancouver economy, and childcare operators who stressed to council how hard it is for parents to find spaces on the North Shore.

“We have waiting lists until September of 2026 and we still have parents continually asking for daycare space,” said Sarel van der Poel, co-owner of Top Drawer Day Care. “Parents need daycare space. I know there’s parking problems, but I think having a child and no place for it to go when you have to work is a bigger problem than the gasses of an idling car.”

Members of council express some sympathy for residents concerns about parking, including Couns. Don Bell and Holly Back, who voted against the project. But the remaining four council members and Mayor Linda Buchanan all voted in favour, following a motion from Buchanan to limit the number of spaces in the daycare to 24.

Coun. Tony Valente said he understood people’s reservations about a building with no parking, but, he added, in the midst of a climate crisis council should be eager to accommodate people who want to live car-free.

“They don't include parking, but in a city of 55,000 people, I'm fairly sure that we can find or the proponent can find 23 renters who don't have driver's licences,” he said. “I'm confident this is going to integrate well into the location and meet the needs of people looking to rent, who may not need parking and parents who need childcare in the neighborhood.”

Buchanan also addressed the angst over parking, but added that buildings like this will likely be more common in the future.

“I can appreciate that frustration but I think for far too long we have been designing cities for cars,” she said. “It's about providing choices and options for people that might have a very different experience than any one of us who live in [single-family] homes, have large green spaces, have cars and driveway, etc. This is a different reality and it requires different solution.”